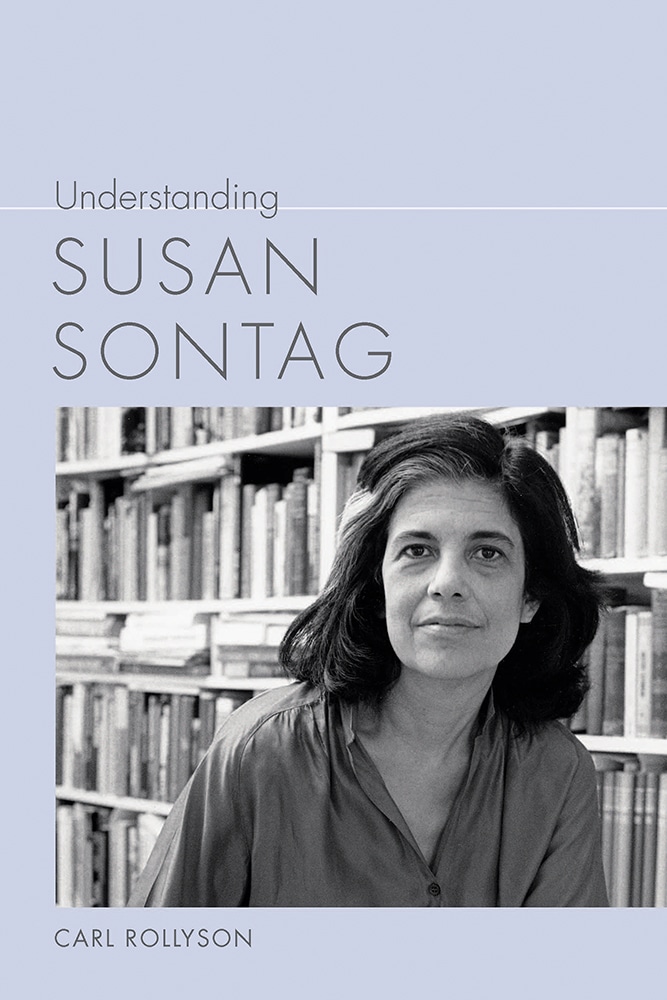 With the publication of Susan Sontag's diaries, the development of her career can now be evaluated in a more genetic sense, so that the origins of her ideas and plans for publication are made plain in the context of her role as a public intellectual, who is increasingly aware of her impact on her culture. In Understanding Susan Sontag, Carl Rollyson not only provides an introduction to her essays, novels, plays, films, diaries, and uncollected work published in various periodicals, he now has a lens through which to reevaluate classic texts such as Against Interpretation and On Photography, providing both students and advanced scholars a renewed sense of her importance and impact.

Rollyson devotes separate chapters to Sontag's biography; her early novels; her landmark essay collections Against Interpretation and Styles of Radical Will; her films; her major mid-career books, On Photography and its sequel, Regarding the Pain of Others; and Illness as Metaphor and its sequel, AIDS and Its Metaphors, together with her groundbreaking short story, "The Way We Live Now." Sontag's later essay collections and biographical profiles, collected in Under the Sign of Saturn, Where the Stress Falls, and At The Same Time: Essays and Speeches, also receive a fresh assessment, as does her later work in short fiction, the novel, and drama, with a chapter discussing I, etcetera; two historical novels, The Volcano Lover and In America; and her plays, A Parsifal, Alice in Bed, and her adaptation of Ibsen's The Lady from the Sea. Chapters on her diaries and uncollected prose, along with a primary and secondary bibliography, complete this comprehensive study.


Carl Rollyson, professor of journalism at Baruch College, the City University of New York, is the author of A Real American Character: The Life of Walter Brennan; A Private Life of Michael Foot; Amy Lowell Anew: A Biography; American Isis: The Life and Art of Sylvia Plath; Hollywood Enigma: Dana Andrews; Marilyn Monroe: A Life of the Actress; Lillian Hellman: Her Life and Legend; Beautiful Exile: The Life of Martha Gellhorn; Norman Mailer: The Last Romantic; and three studies of biography, A Higher Form of Cannibalism? Adventures in the Art and Politics of Biography, Biography: A User's Guide, and Confessions of a Serial Biographer.

"Rollyson's volume stands as the best work yet to involve Sontag with the fictive innovations of her era."—American Literary Scholarship: 2016

"In Understanding Susan Sontag, Carl Rollyson lucidly and critically engages Sontag's career as a writer, filmmaker, tastemaker, and theater director. This book will introduce Sontag to students at the same time that it brings new knowledge to more advanced readers. Of particular value to the specialist are the chapter on Sontag's posthumously published journals and an appendix that surveys Sontag's uncollected work. Rollyson's book makes an outstanding contribution to the Understanding Contemporary American Literature series by appealing to an audience of students, serious readers, and academics."—Barbara Ching, Iowa State University