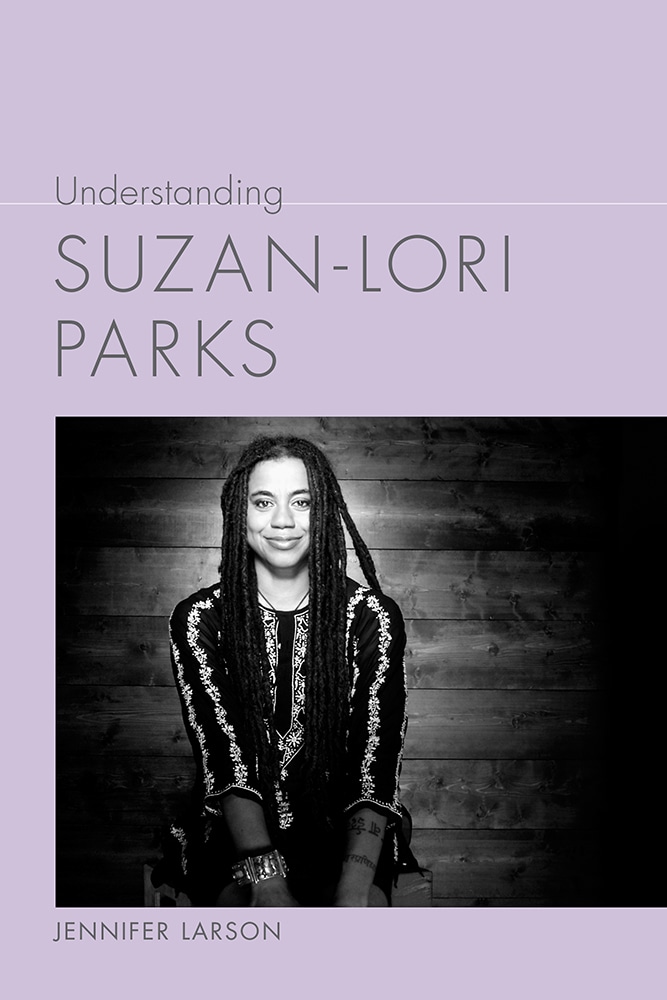 Understanding Suzan-Lori Parks is a critical study of a playwright and screenwriter who was the first African American woman to receive the Pulitzer Prize for Drama. Suzan-Lori Parks is also the recipient of a MacArthur Genius Award, a Whiting Writers Award, a CalArts/Alpert Award in the Arts, two Obie Awards, and a Eugene McDermott Award in the Arts. In this book Jennifer Larson examines how Parks, through the innovative language and narratives of her extensive body of work, investigates and invigorates literary and cultural history.

Larson discusses all of Parks's genres—play, screenplay, essay, and novel—closely reading key texts from Parks's more experimental earlier pieces as well as her more linear later narratives. Larson's study begins with a survey of Parks's earliest and most difficult texts including Imperceptible Mutabilities in the Third Kingdom and The Death of the Last Black Man in the Whole Entire World. Larson then analyzes Venus, In the Blood, and the Lincoln Plays: The America Play and the Pulitzer Prize-winning TopDog/Underdog.

Larson also discusses two of Parks's most important screenplays, Girl 6 and Their Eyes Were Watching God. In interpreting these screenplays, Larson examines film's role in the popularization and representation of African American culture and history. These essays suggest an approach to all genres of literature and blend creativity, form, culture, and history into a revisionary aesthetic that allows for no identity or history to remain fixed, with Parks arguing that in order to be relevant they must all be dynamic and democratic.


Jennifer Larson teaches literature, film, and writing at the University of North Carolina at Chapel Hill.

"Larson's book breaks new ground. Her critical study of the Pulitzer Prize-winning playwright provides us with an aesthetic lens through which to see the impressive and complex works of one of our country's geniuses. Parks's plays, screenplays, essays, and her fiction explore American history and culture in a daring, revolutionary way that Larson is able to express in a clearly written and well researched critical study."—College Language Association Awards Committee Evaluation

"Through her haunting plays, screenplays, and fiction exploring black experiences in white America, Suzan-Lori Parks is creating a legacy that future playwrights need to acknowledge and follow, if they dare. Parks has revolutionized the American theatre and has been the subject of a growing body of critical work. Incorporating and expanding that scholarship, Jennifer Larson has written a carefully nuanced and historically grounded introduction to Parks's provocative and prolific canon. Larson is to be commended for her well-informed discussions of Parks's challenging body of work."—Philip C. Kolin, University Distinguished Professor, College of Arts and Letters, University of Southern Mississippi