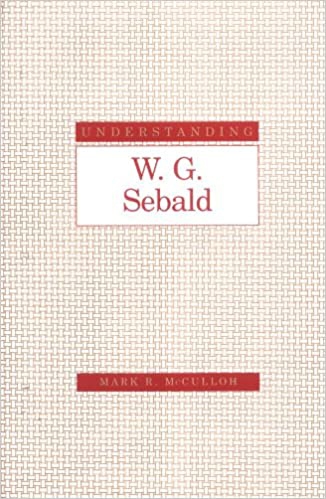 A thorough dissection of Sebald's fiction and his recent acclaim

Understanding W. G. Sebald introduces readers to a novelist and poet regarded as one of the most original talents of the late twentieth century. A German writer who taught in England for thirty years, W. G. Sebald published four novels, first in German and then in English. These works—Vertigo, The Emigrants, The Rings of Saturn, and Austerlitz—are unlike fiction as usually understood. Enthusiastically received by critics and general readers alike, Sebald's work gained even greater acclaim after his death in 2001, just months after the publication of Austerlitz.

In this companion to the writer's fiction, Mark R. McCulloh investigates the reasons for Sebald's almost universal appeal. He also explores the themes, issues, and influences that dominate the writer's oeuvre. Suggesting that Sebald essentially had two literary careers—as his works appeared in German-speaking Europe and then as they appeared in the English-speaking world—McCulloh outlines the writer's reception in his homeland and in translation. McCulloh illumines the vast knowledge of European literatures that Sebald drew upon in composing his recursive and allusive narratives. He also sheds light on the interconnections that lurk beneath the surface of the writer's haunting landscapes and poignant memoirs.

McCulloh examines Sebald's syncretic style, a unique kind of "literary monism" that includes elements of memoir, cultural critique, literary history, meditation, travelogue, biography, autobiography, and even crime story. Sebald's holistic approach, according to McCulloh, points to an overarching "spatial" concept of time in which all events—past, present, and future—exist simultaneously. In addition, McCulloh discusses the writer's other thematic concerns, including the elusiveness of identity, the effects of exile, the destructive forces of history, the power of love, and the nature of the creative process itself.


Mark R. McCulloh is a professor of German at Davidson College in North Carolina. He holds a Ph.D. from the University of Illinois at Urbana-Champaign. Born in Birmingham, Alabama, McCulloh attributes his early interest in foreign languages to hearing Cajun French on the streets of New Orleans while on a family trip. He now lives in Mooresville, North Carolina.

"The book offers a stimulating and well-written introduction to Sebald's writings."—Modern Language Review