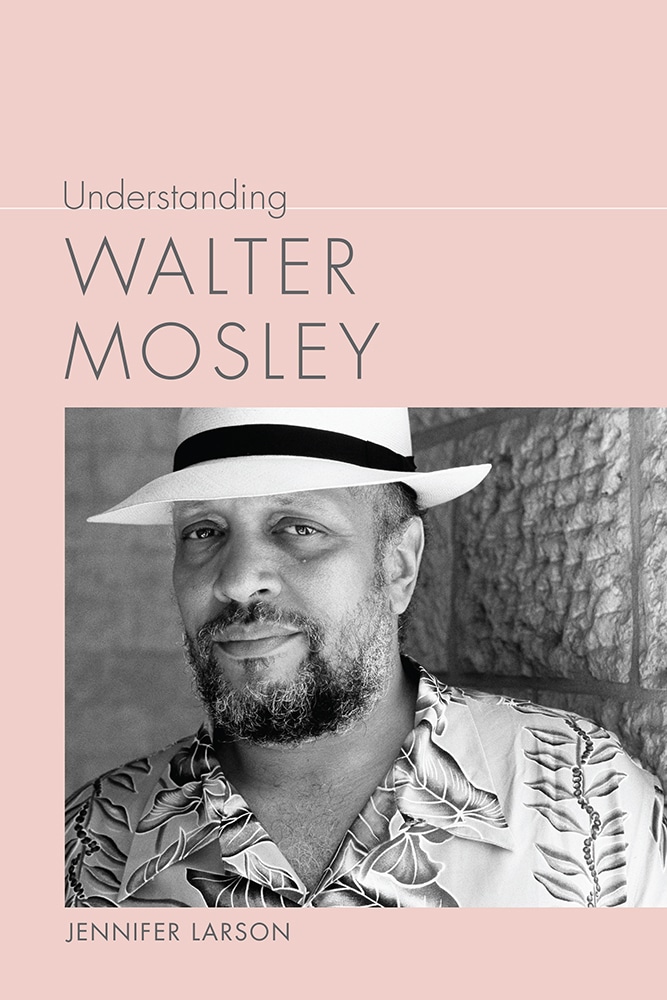 Walter Mosley is perhaps best known for his first published mystery, Devil in a Blue Dress, which became the basis for the 1995 movie of the same name featuring Denzel Washington. Mosley has since written more than forty books across an impressive expanse of genres including, but not limited to, nonfiction, science fiction, drama, and even young adult fiction, garnering him many honors including an O'Henry Award, an Anisfield-Wolf Book Award, a Grammy Award, a Pen Center Lifetime Achievement Award, and two NAACP Image Awards for Outstanding Literary Work in Fiction. In Understanding Walter Mosley, Jennifer Larson considers Mosley's corpus as a whole to help readers more fully understand the evolution of his literary agenda.

All Mosley's texts feature his trademark accessibility as well as his penchant for creating narratives that both entertain and instruct. Larson examines how Mosley's writing interrogates, complicates, and contextualizes recurring moral, social, and even personal questions. She also considers the possible roots of Mosley's enduring popularity with a diverse group of readers. Larson then traces key themes and claims throughout the Easy Rawlins series to show how Mosley's beloved hero offers unique perspectives on race, class, and masculinity in the mid- to late twentieth century; explores the ways in which Fearless Jones, Mosley's second detective, both builds on and diverges from his predecessor's character; and looks at how the works featuring Leonid McGill, Mosley's junior detective, center on understanding the complex relationship between present-day social dilemmas and the personal as well as the communal past.

Regarding Mosley's other genres, Larson argues that the science fiction works together portray a future in which race, class, and gender are completely reimagined, yet still subject to an oppressive power dynamic, while his erotica asks readers to reconsider the dynamics of power and control but in a more personal, even intimate, context. Similarly, in Mosley's nongenre fiction, stories are revived through a reconnection with the past, a reclaiming of cultural heritage and lineage, and a rejection of classist visions of power. Finally, Mosley's nonfiction, which persuades his audience to act through writing, humanitarian efforts, or social uprising, offers a mix of lessons aimed at guiding readers through the same questions that inform his fiction writing.


Jennifer Larson teaches literature, film, and writing at the University of North Carolina at Chapel Hill. She is the author of Understanding Suzan-Lori Parks, coeditor of The Sentimental Mode: Essays in Literature, Film, and Television, and assistant editor of Reading Contemporary African-American Drama: Fragments of History, Fragments of Self.

"She [Larson] does an admirable job of distinguishing this series from other detective works in the noir genre, noting the concern for historical change and a dynamically developing detective."—Modern Language Review

"Noteworthy in Larson's study is the evolution of Easy Rawlins as a character in coherence with changes in race relations over the years since 1948, the time-peg for Devil in a Blue Dress, the first novel in the series."—American Literary Scholarship: 2016

"Writing about the superhumanly productive Walter Mosley is comparable to trying to hold time in a bottle. Yet, Jennifer Larson manages to hold the cap on long enough to provide an informed, engaged, and remarkably accessible study of Mosley's expansive, cross-genre creations. This succinct volume is a gift to Mosley lovers everywhere."—Trudier Harris, University of Alabama

"Larson provides fans and scholars with guides for exploring Mosley's diverse and expanding literary territory. She nimbly walks the fan through the Easy Rawlins series and then uses representative works to illuminate Mosley's other fictional genre. She often opens avenues for scholarly inquiry, especially in linking Mosley's understudied nonfiction to his fictional work."—Owen Brady, Clarkson University

"Walter Mosley is a prolific, provocative, and profound writer, equally at home in a wide range of literary genres. Jennifer Larson has accomplished a difficult, yet worthy task in seeking out new critical insights within both the well-lit rooms and dark corners of Mosley's vast and diverse body of work."—Derek C. Maus, State University of New York at Potsdam