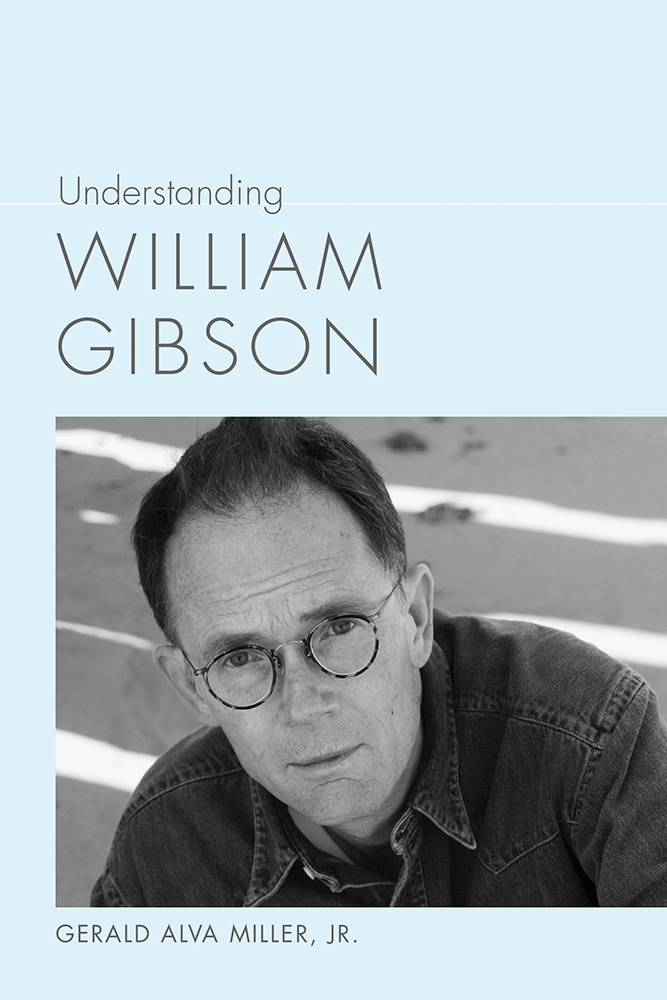 Gerald Alva Miller Jr.'s Understanding William Gibson is a thoughtful examination of the life and work of William Gibson, author of eleven novels and twenty short stories. Gibson is the recipient of many notable awards for science fiction writing including the Nebula, Hugo, and Philip K. Dick awards. Gibson's iconic novel, Neuromancer, popularized the concept of cyberspace. With his early stories and his first trilogy of novels, Gibson became the father figure for a new genre of science fiction called "cyberpunk" that brought a gritty realism to its cerebral plots involving hackers and artificial intelligences.

This study situates Gibson as a major figure in both science fiction history and contemporary American fiction, and it traces how his aesthetic affected both areas of literature. Miller follows a brief biographical sketch and a survey of the works that influenced him with an examination that divides Gibson's body of work into early stories, his three major novel trilogies, and his standalone works. Miller does not confine his study to major works but instead also delves into Gibson's obscure stories, published and unpublished screenplays, major essays, and collaborations with other authors.

Miller's exploration starts by connecting Gibson to the major countercultural movements that influenced him (the Beat Generation, the hippies, and the punk rock movement) while also placing him within the history of science fiction and examining how his early works reacted against contemporaneous trends in the genre. These early works also exhibit the development of his unique aesthetic that would influence science fiction and literature more generally. Next a lengthy chapter explicates his groundbreaking Sprawl Trilogy, which began with Neuromancer.

Miller then traces Gibson's aesthetic transformations across his two subsequent novel trilogies that increasingly eschew distant futures either to focus on our contemporary historical moment as a kind of science fiction itself or to imagine technological singularities that might lie just around the corner. These chapters detail how Gibson's aesthetic has morphed along with social, cultural, and technological changes in the real world. The study also looks at such standalone works as his collaborative steampunk novel, his attempts at screenwriting, his major essays, and even his experimental hypertext poetry. The study concludes with a discussion of Gibson's lasting influence and a brief examination of his most recent novel, The Peripheral, which signals yet another radical change in Gibson's aesthetic.


Gerald Alva Miller Jr. has a doctorate in English from the University of North Carolina at Chapel Hill and specializes in twentieth-century American literature, critical theory, film studies, science fiction, and horror. He is an English instructor at Alamance Community College in Graham, North Carolina, and he is the author of Exploring the Limits of the Human through Science Fiction.

"Gibson's worldview calculates as a zero because he sees our era as defining itself principally by contrast with others, forever living in a "post-" age. The author himself excels in these circumstances by being what the French call a bricoleur, improvising with borrowed materials to produce something beyond conventional intents."—American Literary Scholarship: 2016

"Understanding William Gibson constitutes an indispensable contribution to the study of one of the most important and influential authors of contemporary fiction. By tracing a synoptic view of the author's oeuvre, from his early stories to his cyberpunk fiction to his recent 'Bridge Trilogy,' Al Miller's wonderful monograph makes Gibson the means to grasp a profound historical transformation whereby the future encroaches on the present and the world becomes a science fiction. A genuine critical achievement."—Gregory Flaxman, University of North Carolina Chapel Hill

"Gerald Alva Miller's Understanding William Gibson provides readers with a comprehensive picture of Gibson's formation as a writer and visionary. Miller captures the evolution of Gibson's style, demonstrates how he 'continually adapts his style and plots to technological advancements and changes in the sociocultural landscapes' and how his style has metamorphosed in response to everyday reality that 'has increasingly become a kind of science fiction.' Miller's book explicates Gibson as a postmodern writer experimenting with style and genre to advance a critique of cybernetic control, a critique that, ironically, has furnished some of the most well-known terms, such as 'cyberspace,' of the Internet and virtual reality age."—María DeGuzmán, professor of English and comparative literature, director of Latina/o Studies, University of North Carolina Chapel Hill