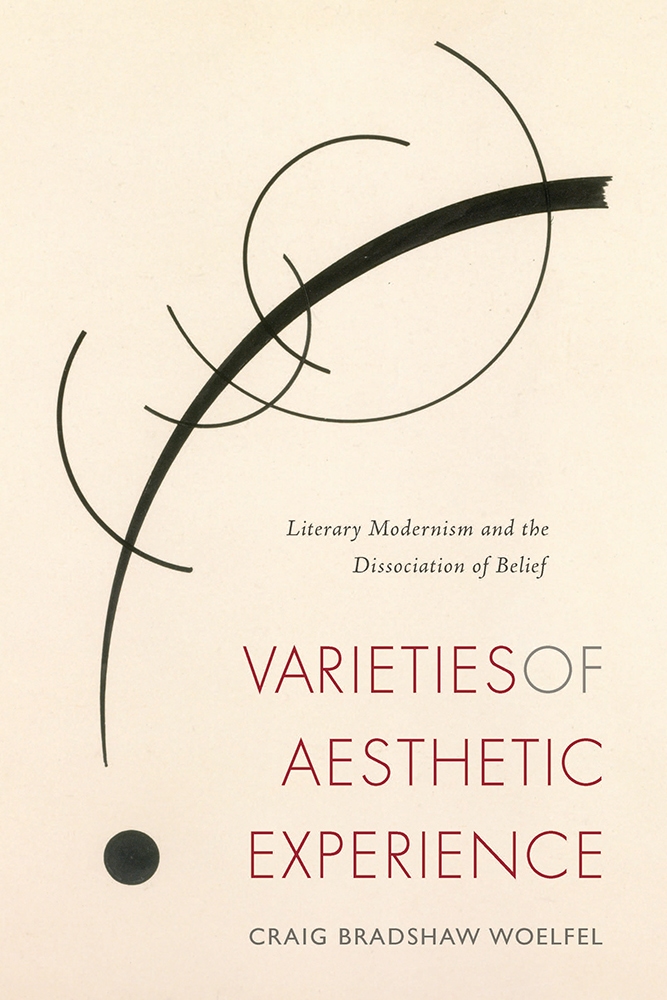 Literary Modernism and the Dissociation of Belief

An exploration of belief as an experience, both secular and religious, through the study of major literary works

At the height of modernism in the 1920s, what did it mean to believe and how was it experienced? Craig Woelfel seeks to answer this pivotal question in Varieties of Aesthetic Experience: Literary Modernism and Dissociation of Belief, a groundbreaking exploration of the relationship between secular modernity and religious engagement.

Woelfel hinges his argument on the unlikely comparison of two revered modern writers: T. S. Eliot and E. M. Forster. They had vastly different experiences with religion, as Eliot converted to Christianity later in life and Forster became a steadfast nonbeliever over time, but Woelfel contends that their stories offer a compelling model for belief as broken and ambivalent rather than constant. Narratives of faith—its loss or gain—are no longer linear but instead are just as fractured and varied as the modernists themselves. Drawing from Eliot's and Forster's major and minor creative and critical works, Woelfel makes the case for a "dissociation of belief" during the modern era—a separation of emotional and spiritual religious experience from its reduction to forms. He contextualizes belief in the modern era alongside modernist religious studies scholarship and current secularization theory, with particular attention to Charles Taylor's A Secular Age, paving the way for a more nuanced understanding of religious engagement at the time.

In Varieties of Aesthetic Experience, Woelfel considers major literary works—including Eliot's The Waste Land and Forster's A Passage to India—as well as the Cambridge Clark Lectures and previously unstudied personal writings from both authors. The volume revolves around a line from Eliot himself, from a lecture in which he said that he wanted "to see art, and to see it whole." Rather than excluding belief from the conversation, Woelfel contends that modernist art can become a critical liminal space for exploring what it means to believe in a secular age.


Craig Bradshaw Woelfel is a professor of British, American, and postcolonial literature at Flagler College in St. Augustine, Florida. His research and publications focus on the intersections of religion, literature, and intellectual history in the modernist period, as well as on Dante and the modernists.

"Craig Bradshaw Woelfel makes a compelling case for why 'our beliefs about belief and modernism need revision.' With careful attention to thinkers such as William James and Charles Taylor, he develops a sophisticated account of belief in modernity and reads work by T. S. Eliot and E. M. Forster with great subtlety and insight."—Mark Knight, Lancaster University

"A compelling and thorough book reexamining the fraught relationship between modernism, secularization, and belief. Woelfel poses hard questions about modern secularity, religion, and the narratives that underwrite them. His answers draw from an illuminating contrast between modernist literary giants, Eliot and Forster, whose paths diverged toward and away from religion sharply. Written with clarity, intelligence, and forthrightness . . . a valuable model of new modernist studies."—Anthony Cuda, author of The Passions of Modernism