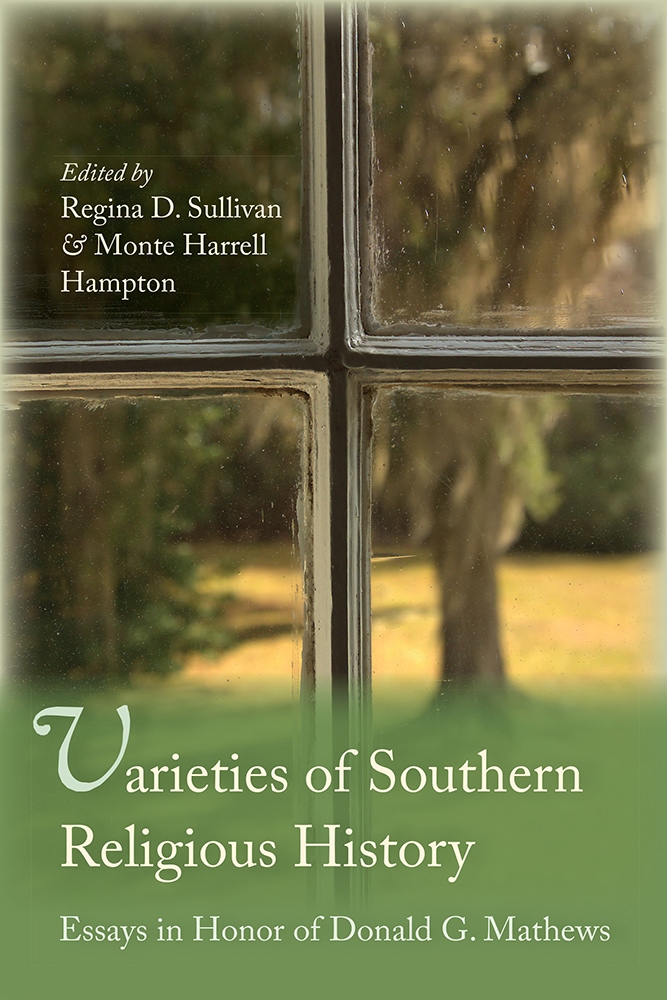 Essays from former students of Donald G. Mathews on topics in Southern religion

Comprising essays written by former students of Donald G. Mathews, a distinguished historian of religion in the South, Varieties of Southern Religious History offers rich insight into the social and cultural history of the United States. Fifteen essays, edited by Regina D. Sullivan and Monte Harrell Hampton, offer fresh and insightful interpretations in the fields of U. S. religious history, women's history, and African American history from the colonial era to the twentieth century. Emerging scholars as well as established authors examine a range of topics on the cultural and social history of the South and the religious history of the United States.

Essays on new topics include a consideration of Kentucky Presbyterians and their reaction to the rising pluralism of the early nineteenth century. Gerald Wilson offers an analysis of anti-Catholic bias in North Carolina during the twentieth century, and Mary Frederickson examines the rhetoric of death in contemporary correspondence. There are also reinterpretations of subjects such as late-eighteenth-century Ohio Valley missionaries Lorenzo and Peggy Dow, a recontextualization of Millerism, and new scholarship on the appeal of spiritualism in the South.

Historians of U.S. women examine how individuals struggled with gender conventions in the late nineteenth and early twentieth centuries. Robert Martin and Cheryl Junk, touching on how women struggled with the gender convictions, discuss Anne Wittenmyer and Frances Bumpass, respectively, demonstrating how religious ideology both provided space for these women to move into new roles and yet limited their activities to specific realms. Emily Bingham offers a study of how her forebear Henrietta Bingham challenged gender roles in the early twentieth century.

This collection provides fresh insight into a variety of topics in honor of Donald G. Mathews and his legacy as a scholar of southern religion.


Regina D. Sullivan is the dean of global education at Carson-Newman University. She holds an M.A.R. from Yale Divinity School and a Ph.D. from the University of North Carolina at Chapel Hill. She is the author of Lottie Moon: A Southern Baptist Missionary to China in History and Legend. Her articles have appeared in Historically Speaking, Entering the Fray: Gender, Politics, and Culture in the New South, and Women in the American Civil War: An Encyclopedia.

Monte Harrell Hampton is an adjunct assistant professor of history at North Carolina State University and a pastor in the Raleigh area. He is the author of Storm of Words: Science, Religion, and Evolution in the Civil War Era.

"This book includes as appendices lists of the dissertations he has directed and of his own publications, which along with many fine essays in this volume, constitute an impressive and wide-ranging legacy."—H-Net Reviews

"These impressive essays are fitting testimony to the continuing influence of Donald Mathews."—American Nineteenth Century History

"These essays will delight readers looking for new angles on southern religious history . . ."—The Journal of Southern Religion

"A fascinating cast troops through this lively tribute to Donald Mathews—preachers, prophets, phrenologists, and a southern belle who brought the blues to Bloomsbury. Here is southern religious history in all its memorable variations."—Christine Leigh Heyrman, Robert W. and Shirley P. Grimble Professor of American History, University of Delaware

"Over a half century Don Mathews has probed tellingly the complexities and terrible ironies at the intersection of religion, morality, and race and gender relations, particularly in the bible belt. Reflecting his stature and continuing influence are the two dozen students who wrote dissertations with him. Here, in honor of their friend and mentor, two-thirds share their frequently exciting work in progress, often using biography as a lens."—David Moltke-Hansen, co-editor of Cambridge Studies on the American South