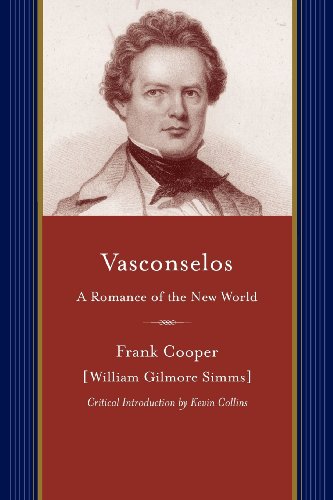 A Romance of the New World

Vasconselos is a Colonial Romance, and focuses on the Spanish effort to colonize the New World. Within this exploration, Simms discusses the adjustment of Spanish culture from Medieval to Early Modern standards, the effects of imperialistic ethics upon that culture, ruling class corruption, the alienation of racial and national minorities, and the historic De Soto expedition to mainland North America. In addition, the opening of the novel incorporates young love corrupted by sibling rivalry and incest. The end of the book treats the emergence of a new American national identity influenced by Native American culture and, especially, by the abilities of individuals to adjust themselves to an untamed frontier environment. Simms lauded his own work as a story of "dark & terrible imaginings," a tale of the "wildest interest and the most intense powers".

Simms originally planned to publish the novel anonymously, but he accepted the suggestion of J. S. Redfield, its first publisher, to attribute the work to "Frank Cooper." The 1853 edition, the Cooper edition, is dedicated to Dr. John W. Francis of New York. When the novel was reissued in 1856, Simms was listed as the author, and the dedication was revised to include a discussion of the caprice that led him first to publish the work pseudonymously.