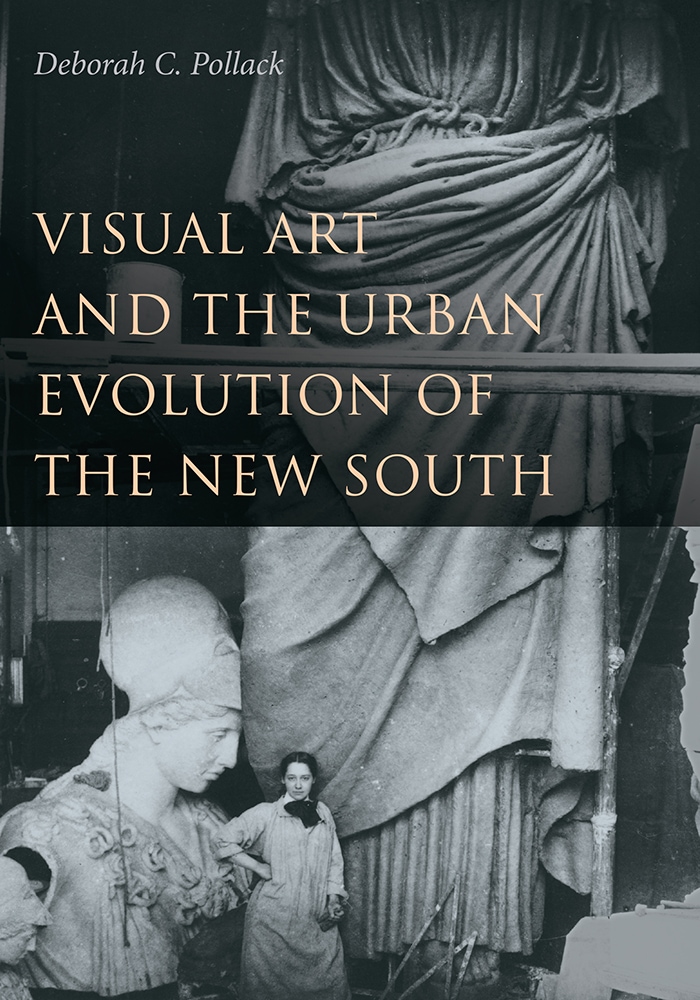 Visual Art and the Urban Evolution of the New South

Visual Art and the Urban Evolution of the New South recounts the enormous influence of artists in the evolution of six southern cities—Atlanta, Charleston, New Orleans, Louisville, Austin, and Miami—from 1865 to 1950. In the decades following the Civil War, painters, sculptors, photographers, and illustrators in these municipalities employed their talents to articulate concepts of the New South, aestheticism, and Gilded Age opulence and to construct a visual culture far beyond providing pretty pictures in public buildings and statues in city squares.

As Deborah C. Pollack investigates New South proponents such as Henry W. Grady of Atlanta and other regional leaders, she identifies "cultural strivers"—philanthropists, women's organizations, entrepreneurs, writers, architects, politicians, and dreamers—who united with visual artists to champion the arts both as a means of cultural preservation and as mechanisms of civic progress. Aestheticism, made popular by Oscar Wilde's southern tours during the Gilded Age, was another driving force in art creation and urban improvement. Specific art works occasionally precipitated controversy and incited public anger, yet for the most part artists of all kinds were recognized as providing inspirational incentives for self-improvement, civic enhancement and tourism, art appreciation, and personal fulfillment through the love of beauty.

Each of the six New South cities entered the late nineteenth century with fractured artistic heritages. Charleston and Atlanta had to recover from wartime devastation. The infrastructures of New Orleans and Louisville were barely damaged by war, but their social underpinnings were shattered by the end of slavery and postwar economic depression. Austin was not vitalized until after the Civil War and Miami was a post-Civil War creation. Pollack surveys these New South cities with an eye to understanding how each locale shaped its artistic and aesthetic self-perception across a spectrum of economic, political, gender, and race issues. She also discusses Lost Cause imagery, present in all the studied municipalities.

While many art history volumes concerning the South focus on sultry landscapes outside the urban grid, Visual Art and the Urban Evolution of the New South explores the art belonging to its cities, whether exhibited in its museums, expositions, and galleries, or reflective of its parks, plazas, marketplaces, industrial areas, gardens, and universities. It also identifies and celebrates the creative urban humanity who helped build the cultural and social framework for the modern southern city.


Deborah C. Pollack is an art historian in Palm Beach, Florida, where she and her husband own Edward and Deborah Pollack Fine Art. She is the author of Orville Bulman: An Enchanted Life and Fantastic Legacy, Felix de Crano: Forgotten Artist of the Flagler Colony, and the award-winning Laura Woodward: The Artist behind the Innovator Who Developed Palm Beach and a contributor to the New Encyclopedia of Southern Culture.

"a valuable account of an important aspect of southern urban culture."—Register of the Kentucky Historical Society

"A most succinct encapsulation of Louisville's arts and cultural history. Much as the Ohio River caresses this city, the author's discussion of the evolution of culture, arts and a fascinating philanthropic history is intertwined perfectly. The Louisville chapter is a literary treasure and gift for our city by the river."—David L. Buchta, director and state curator, Kentucky Division of Historic Properties

"Visual Art and the Urban Evolution of the New South is referenced like a doctoral dissertation, but reads like the page-turner novel. This book is nothing short of fabulous, and a must-read for the artist, architect, collector, historian or anyone interested in the contribution of the arts to the development of the New South."—Jay Rayburn, Florida State University

"Deborah Pollack has produced a thought-provoking and vibrant study on the aesthetic life of six southern cities. As informed by urban development and an evolving visual culture, Pollack expands our understanding of the New South through the periods of Reconstruction, the Gilded Age, and early Modernism. Regional identity and iconography are positioned among interconnected themes of transatlantic influence, race, gender, patronage, and aestheticism in this meaningful contribution to existing scholarship in the history of the South."—Nancy Siegel, professor of art history, Towson University

"In her path breaking study, Visual Art and the Urban Evolution of the New South, Deborah Pollack has provided readers with innovative, compelling arguments, amid a carefully-crafted narrative, for the critical role of the visual arts in the development of six important Southern cities in the eighty-five years following the catastrophic Civil War."—Paul George, professor of history, Miami Dade College

"This is a major readable and scholarly contribution to understanding the arts...."—C. W. Westfall, University of Notre Dame, Choice: Current Reviews for Academic Libraries, August 2015