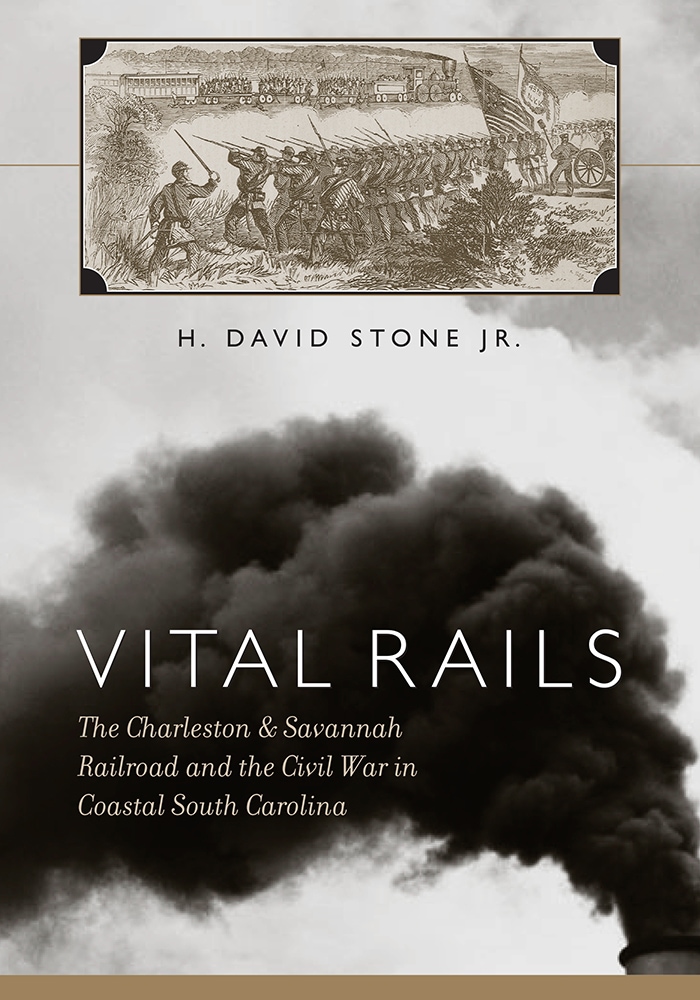 Completed in 1860 and spanning more than one hundred miles across rice fields, salt marshes, and seven rivers and creeks, the Charleston & Savannah Railroad was designed to revolutionize the economy of South Carolina's lowcountry by linking key port cities. With the onset of the Civil War, the railroad became an integral part of the Confederacy's military, economic, and communications efforts along the coast and a frequent military objective of Union assaults. In Vital Rails, H. David Stone, Jr., provides the first detailed recounting of the C&S line's history and of the railroad's valuable role in the Civil War.

Originally conceived as a means to stave off commercial isolation in Charleston and Savannah by placing the cities on the shortest trade route between the Northeast and the Gulf Coast, the C&S was chartered by a coalition of lowcountry planters, merchants, and politicians. Construction was aided by state government funding and completed by crews of slaves just prior to the onset of war. Following the Union capture of Port Royal in November 1861, the railroad's importance became not only economic but also logistical as a communications line and troop transport for the Confederacy. From November 1861 to March 1862, while commanding coastal forces, General Robert E. Lee supervised construction of the line's fortifications and situated his headquarters near it at Coosawhatchie in Beaufort District.

The railroad was essential in containing Union attacks on Charleston after the capture of Beaufort. In total the C&S was the objective of eight battles and skirmishes with Union forces—including the Battles of Pocotaligo in May and October of 1862 and the Battle of Honey Hill in November 1864. It was not until General William T. Sherman's army took Savannah in December 1864 that the Union forces had the strength to mount a successful campaign against the railroad.

Left in financial ruin after the war, the C&S faced a series of bankruptcies before its route's eventual incorporation into one of the most important commercial transportation arteries on the eastern seaboard, the Plant System, later the Atlantic Coast Line, the Seaboard Coast Line, and finally CSX Transportation. In mapping this first full history of the railroad, Stone has arduously sifted through company records, annual reports, and other public and private documents to record fully the story of the C&S and of the men—including William J. Magrath, R. L. Singletary, and Henry S. Haines—who managed it during wartime with resourcefulness and a strong sense of their role in defending South Carolina.

"Vital Rails is an excellent study that expertly connects the importance of the Charleston & Savannah Railroad to the Confederacy's overall war effort. Rich with detailed information, maps, and images, Stone's book is a must-read for all those interested in truly understanding the crucial logistical and military operations in the South Carolina lowcountry during the Civil War."—Stephen R. Wise, curator, Parris Island Museum, and author of Gate of Hell: Campaign for Charleston Harbor, 1863

"H. David Stone breaks new ground in his thoughtful study of the Charleston & Savannah Railroad. The C&S's conception, construction, Civil War operations, and economic collapse at the end of the war describe in microcosm antebellum southern railroad development. The Confederate defense of the railroad against Union raiders offers new insights into this nearly forgotten aspect of the Civil War. A well-researched history, Vital Rails should attract the interest of economic, military, railroad, and southern historians as well as those interested in the histories of Charleston and Savannah."—John E. Clark, Jr., author of Railroads in the Civil War: The Impact of Management on Victory and Defeat