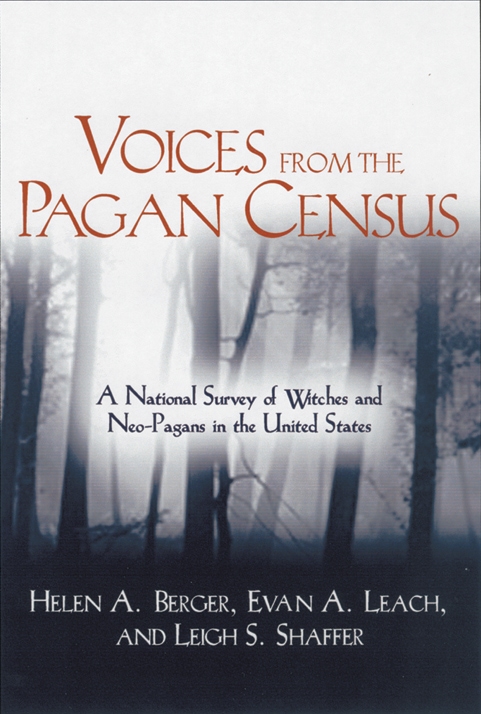 Voices from the Pagan Census

Helen A. Berger, Evan A. Leach, and Leigh S. Shaffer

A compelling portrait of an emerging religious group

Voices from the Pagan Census provides unprecedented insight into the expanding but largely unstudied religious movement of Neo-Paganism in the United States. Helen A. Berger, Evan A. Leach, and Leigh S. Shaffer present the findings of "The Pagan Census," which was created and distributed by Berger and Andras Corban Arthen of the Earthspirit Community. Analyzing the most comprehensive and largest-scale survey of Neo-Pagans to date, the authors offer a portrait of this emerging religious community, including an examination of Neo-Pagan political activism, educational achievements, family life, worship methods, experiences with the paranormal, and beliefs about such issues as life after death.

A collection of religious groups whose practices evolved from Great Britain's Wicca movement of the 1940s, Neo-Paganism spread to the United States in the 1960s. While the number of people who identify themselves with the religion has continued to rise, quantitative study of Neo-Paganism has been difficult given the movement's lack of centralized leadership and doctrine and its development as scattered, independent groups and individuals. Endorsed by all major Neo-Pagan leaders, "The Pagan Census" generated a demographically diverse response. In contrast to most previous surveys, which were limited to Neo-Pagan festivals, this survey incorporates input from the large population of practitioners who do not participate in such events.

Keenly anticipated by the academic and Neo-Pagan communities, the results of the census provide the most in-depth information about the group yet assembled. Comparing Neo-Pagans with American society at large, Berger, Leach, and Shaffer show that although the two groups share certain statistical characteristics, there are differences as well. The scholars also identify variations within the Neo-Pagan population, including those related to geography and to the movement's multiple spiritual paths.


Helen A. Berger is a professor of sociology at West Chester University in Pennsylvania. She is the author of A Community of Witches: Contemporary Neo-Paganism and Witchcraft in the United States.

Evan A. Leach is an associate professor of management at West Chester University. The former director of research at the Wharton Cultural Management Project at the University of Pennsylvania, Leach holds a Ph.D. in organizational behavior from Yale University.

"Because the Neo-Pagan movement is comprised of small, decentralized, non-doctrinaire groups, creating a representative profile of Neo-Paganism has presented a real challenge to social scientists. This breakthrough study moves beyond previous case studies of local groups and surveys of festival gatherings to provide a treasure trove of national survey data on six strands of the Neo-Pagan tradition: Wiccans, Pagans, Goddess Worshipers, Druids, Shamans, and Unitarian Universalist Pagans. Voices from the Pagan Census is a significant contribution to our understanding of Neo-Paganism"—David G. Bromley, Department of Sociology and Anthropology, Virginia Commonwealth University

"To survey a 'hidden population' is an enormous methodological challenge, one that the authors have succeeded in meeting. Their material provides exciting new insights into the growing Neo-Pagan community of the United States that will stimulate other researchers, provide material for classroom discussion, and appeal to the general reader."—Vivinne Crowley, University of London

"Voices from the Pagan Census develops a reliable and fascinating social profile of the Neo-Pagan movement. It joins a small number of excellent studies documenting the changing face of religion in America. A unique resource, this book should be read by everyone interested in the study of new religious movements."—Lorne L. Dawson, Department of Religious Studies, University of Waterloo