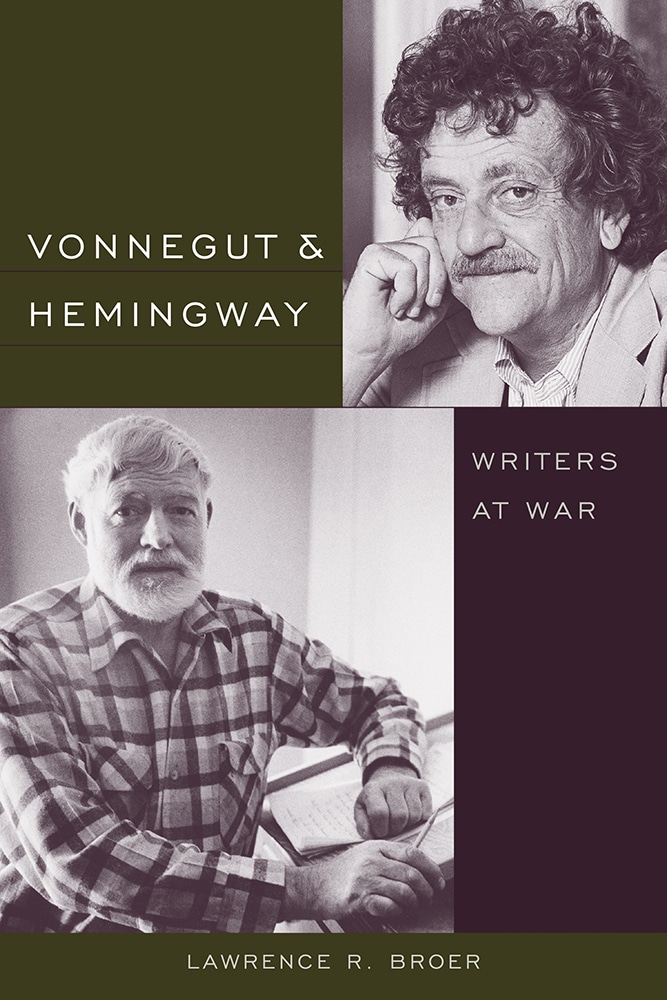 In this original comparative study of Kurt Vonnegut and Ernest Hemingway, Lawrence R. Broer maps the striking intersections of biography and artistry in works by both writers, and he compares the ways in which they blend life and art.

Broer views Hemingway as the "secret sharer" of Vonnegut's literary imagination and argues that the two writers—while traditionally considered as adversaries because of Vonnegut's rejection of Hemingway's emblematic hypermasculinism—inevitably address similar deterministic wounds in their fiction: childhood traumas, family insanity, deforming wartime experiences, and depression. Rooting his discussion in these psychological commonalities between Vonnegut and Hemingway, Broer traces their personal and artistic paths by pairing sets of works and protagonists in ways that show the two writers not only addressing similar concerns, but developing a response that in the end establishes an underlying kinship when it comes to the fate of the American hero of the twentieth century.

Broer sees Vonnegut and Hemingway as fundamentally at war—with themselves, with one another's artistic visions, and with the idea of war itself. Against this onslaught, he asserts, they wrote as a mode of therapy and achieved literary greatness through combative opposition to the shadows that loomed so large around them.


Lawrence R. Broer is a professor emeritus of English at the University of South Florida and the author or editor of eight previous books, including Sanity Plea: Schizophrenia in the Novels of Kurt Vonnegut and Hemingway's Spanish Tragedy.

"Vonnegut and Hemingway: Writers at War promises to be one of the more important books on either writer, let alone both. Broer does much more than simply comparing and contrasting two authors not customarily studied together. Beyond this acknowledgement of difference, he explores striking affinities in their works, pairing sets of works and protagonists in ways that show the two writers not only addressing similar concerns, but developing a response that in the end establishes an underlying kinship when it comes to the fate of the American hero of the twentieth century. Broer's insights are interpenetrating. More is known about Hemingway's work thanks to Vonnegut's example, and vice versa. Simply having the other writer's work there makes each book in question appear in a starkly new and revealing light. The pairing is an excellent choice, and comparing the sets of works is undertaken with great aptitude."—Jerome Klinkowitz, author of Kurt Vonnegut's America

"Lawrence Broer's brilliant book tracks the creative trajectories of two iconic American writers as they confront the 'taboo fears and desires linking the traumas of childhood with the wounds of war.' With keen and elegant analysis, Broer demonstrates how these artists discovered, midcareer, a 'buried or denied feminine self' that transformed their art. This book is far and away the best analysis to date of Hemingway's later works, and it neatly book-ends Broer's earlier studies of Vonnegut's art by placing it meaningfully, like that of Hemingway, within a comprehensive whole. Broer aligns and transcends previous attempts to psychoanalyze the lives and art of both these men, crafting a classic of its kind. I have only the highest praise for Broer's masterpiece, which hikes all the way to the top of Mt. Kilimanjaro and beyond."—Linda Patterson Miller, Penn State Humanities Laureate (2011–12) and head of the editorial board for The Cambridge Edition of the Letters of Ernest Hemingway

"Broer has consistently brought his expert knowledge of modern writers into his study of contemporary writing. Vonnegut and Hemingway: Writers at War continues that pattern, with even more irony in the subtitle. An accurate—and provocative—book."—Linda Wagner-Martin, Hanes Professor Emerita, University of North Carolina-Chapel Hill