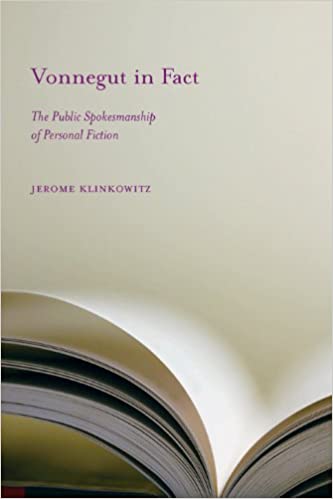 The Public Spokesmanship of Personal Fiction

Vonnegut in Fact offers a thorough assessment of the artistry of Kurt Vonnegut, known not only as the best-selling author of Slaughterhouse-Five, Timequake, and a dozen other novels, but also as the most widely recognized public spokesperson among writers since Mark Twain. Jerome Klinkowitz traces the emergence of Vonnegut's nonfiction since the 1960s, when commentary and feature journalism replaced the rapidly dying short story market.

Offering close readings and insightful criticism of Vonnegut's three major works of nonfiction, his many uncollected pieces, and his unique manner of public speaking, Klinkowitz explains how Vonnegut's personal visions developed into a style of great public responsibility that mirrored the growth of his fiction. Klinkowitz views his subject as a gentle manipulator of popular forms and an extremely personable figure; what might seem radically innovative and even iconoclastic in his fiction becomes comfortably avuncular and familiarly American when followed to its roots in his public spokesmanship.

Jerome Klinkowitz is the author of more than forty books, including novels, collections of short stories, studies of literature, philosophy, art, music, sports, and air combat narratives. A former working musician and owner and operator of a minor-league baseball team, he is a professor of English and University Distinguished Scholar at the University of Northern Iowa.

"Klinkowitz is surely right that with a writer such as Vonnegut, where the fiction and the life resonate so closely, a serious appreciation of the nonfiction pieces, on the same level as the novels, is essential to our understanding of the whole oeuvre."—Modern Language Studies

"A well-written and authoritative book by a major critic and Vonnegut expert."—Choice

"The great strength of Vonnegut in Fact lies in its thoroughness. Klinkowitz covers virtually everything Vonnegut has written or said."—Science Fiction Studies

"This book is a jewel for Vonnegut fans. It also adds an important footnote to what 1960s liberalism means in American culture."—Independent Publisher