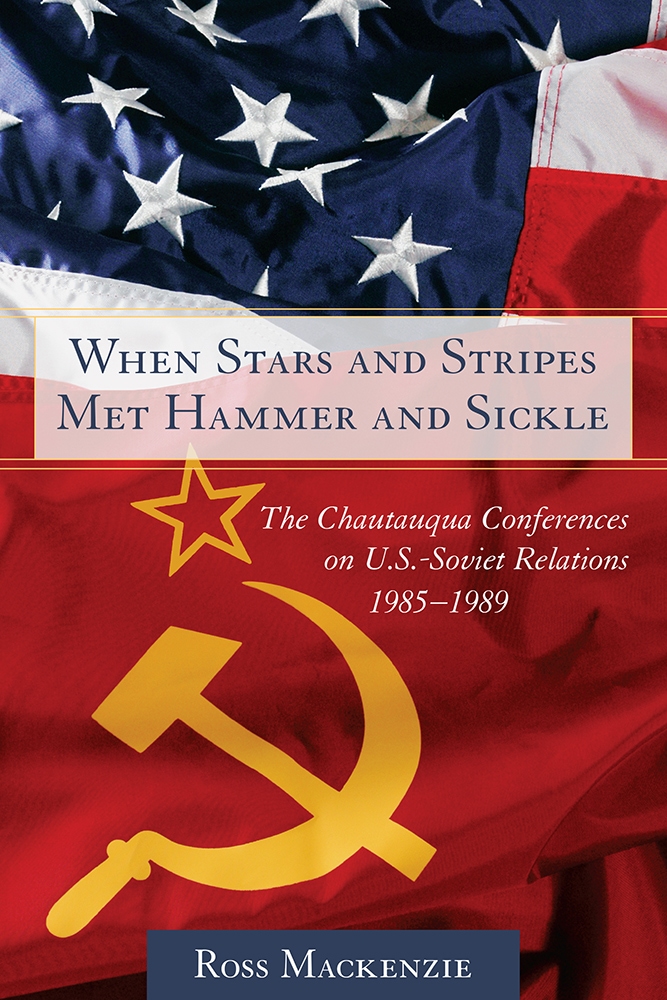 When Stars And Stripes Met Hammer And Sickle

When Stars and Stripes Met Hammer and Sickle tells the story of face-to-face citizen diplomacy that brought together Americans and Soviets during the closing years of the cold war. Looking specifically at five conferences held between 1985 and 1989, Ross Mackenzie recounts the experiences of artists, diplomats, government officials, and interested citizens who joined together for a unique mix of political debates, artistic performances, open discussions, and socialization.

Sponsored by the Chautauqua Institution, a center for arts, education, religion, and recreation in western New York, these conferences offer a snapshot of the relationship between the United States and the Soviet Union just before the collapse of the Soviet government and federation in November 1989. The meetings also point to the promising future of people-to-people diplomacy. The book both reproduces verbatim some speeches and discussions and offers Mackenzie's accounts of episodes that took place inside and outside of the conferences. Mackenzie suggests that these conferences, coming at the time of Mikhail Gorbachev's glasnost and perestroika, may have been both a measure of the reforms' success and a driving force in continuing their momentum.
Highlighting the imaginative, wide-ranging approach employed by Chautauqua, Mackenzie recounts the scope of topics discussed at the conferences, from nuclear weapons, women's issues, and global health care to American intervention in Latin America and Soviet intervention in Afghanistan. He also identifies the cross section of people drawn to participate, ranging from average American and Soviet citizens to individuals of international renown, including U.S. policymakers Paul Wolfowitz and Paul Nitze, violinist Eugene Fodor, poets Andrei Voznesensky and Yevgeny Yevtushenko, female cosmonaut Valentina Tereshkova, musicians Grover Washington Jr. and Tommy Cecil, and politicians Mario Cuomo and Geraldine Ferraro.


Ross Mackenzie is historian emeritus of the Chautauqua Institution and the author of Threads: A Book of Prayers and Stories. Prior to coming to the institute, Mackenzie taught history at Union Theological Seminary in Virginia for twenty years.

"When Stars and Stripes Met Hammer and Sickle makes important contributions to our knowledge about U.S.-Soviet relations during the seminal period in which the Cold War was gradually ending. Moreover, Ross Mackenzie's well-researched, well-written, and judiciously argued narrative shows us the valuable role played by nongovernmental organizations like the Chautauqua Institute during this historic transformational period."—Ralph B. Levering, author of The Cold War: A Post-Cold War History