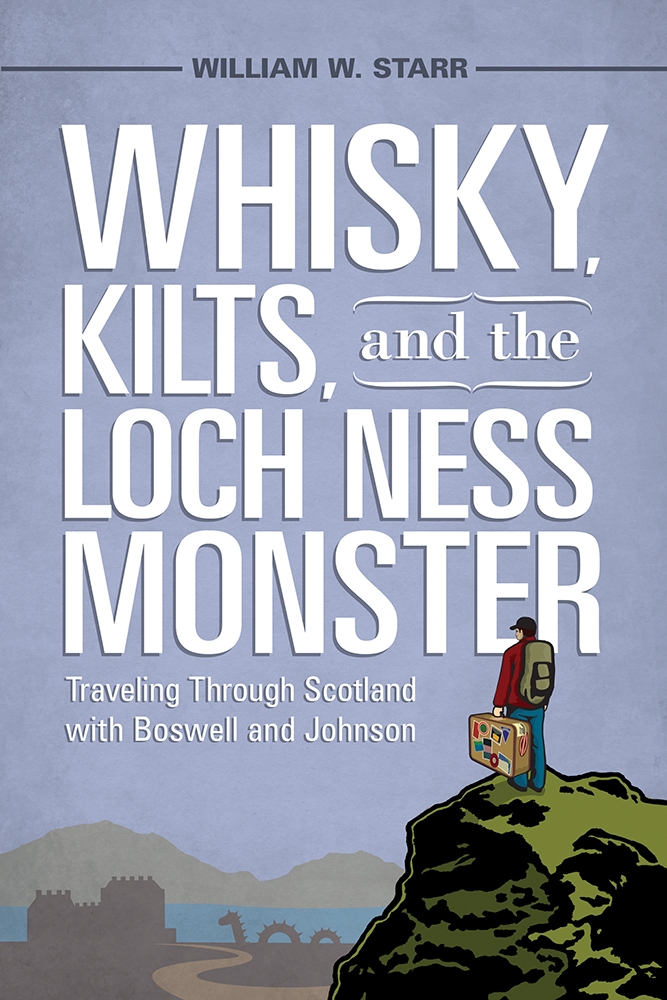 Traveling through Scotland with Boswell and Johnson

Whisky, Kilts, and the Loch Ness Monster is a memoir of a twenty-first-century literary pilgrimage to retrace the famous eighteenth-century Scottish journey of James Boswell and Samuel Johnson, two of the most celebrated writers of their day. An accomplished journalist and aficionado of fine literature, William W. Starr enlivens this crisply written travelogue with a playful wit, an enthusiasm for all things Scottish, the boon and burden of American sensibility, and an ardent appreciation for Boswell and Johnson—who make frequent cameos throughout these ramblings.

In 1773 the sixty-three-year-old Johnson was England's preeminent man of letters, and Boswell, some thirty years Johnson's junior, was on the cusp of achieving his own literary celebrity. For more than one hundred days, the distinguished duo toured what was then largely unknown Scottish terrain, later publishing their impressions of the trip in a pair of classic journals. In 2007 Starr embarked on a three-thousand-mile trek through the Scottish Lowlands and Highlands, following the path—though in reverse—of Boswell and Johnson. Starr tracked their route as closely as the threat of storms, distractions of pubs, and limitations of time would allow. Like his literary forebears, he recorded a wealth of keen observations on his encounters with places and people, lochs and lore, castles and clans, fables and foibles. The tour begins and ends in Edinburgh and includes along the way visits to Glasgow, Inverness, Loch Ness, Culloden, Auchinleck, the Isles of Iona and Skye, and many more destinations. In addition Starr expands his course to include two of the farthest reaches of Scotland where eighteenth-century travelers dared not tread: the Outer Hebrides and the Orkney Islands, remarkable regions shaped by distinctive weather, history, and isolation.

Blending biography, intellectual and cultural history, and comic asides into his travelogue, Starr has crafts an inviting vantage point from which to view aspects of Scotland's storied past and complex present through an illuminating literary lens.


William W. Starr has been executive director of the Georgia Center for the Book in Decatur since 2003. A native of Atlanta, he was an editor for United Press International and for thirty years a prize-winning writer and editor for the Columbia (S.C.) State newspaper. Starr is the author of Southern Writers and A Guide to South Carolina Beaches, an associate editor for The South Carolina Encyclopedia, and a contributing essayist for many newspapers and journals.

"We read travel books in order to quicken the corpse of desire so much so that we imagine tramping over the hills and far away. Bill Starr carries us along as he follows Johnson's and Boswell's path across Scotland with the highly sensible intention of seeing what he can see. What he shows us is wondrously satisfying: castles and history, single malt Scotch, breakfasts, and days sweet and sour with appealing meanderings."—Sam Pickering

"Readers will love Bill Starr's masterpiece for the British history he relates, his insights into Johnson and Boswell, and his gustatorial delights and missteps. Plenty of people will slowly pore over his beautiful descriptions of Scottish landscapes, relishing every bog, loch, and craggy outcrop. Good for them. But listen-this book is outright hilarious in between. It's Bill Bryson funny. It's Sedaris funny. I don't want to judge poor Bill Starr, but at times it's as if Ziggy went on a road trip, and because of that notion of catharsis, we can all feel better about ourselves as we watch Bill Starr endure all things Scottish: the elements, the language, the myths, the customs. I'm glad he got out of there alive, and relatively sane enough to finish this wonderful memoir."—George Singleton, author of The Half-Mammals of Dixie

"Starr made a spirited return visit to Scotland after thirty years to follow in the literary footsteps of Samuel Johnson and James Boswell, who visited the Highlands and the Hebrides in 1773 and wrote about it. The reader quickly learns that Starr is making the same trip, but in reverse, so there is a suspicion that something funny is going on. In fact, there are a lot of funny things going on. This is an often hilarious travel-autobiography by an erudite, gregarious traveler with a large fund of humor, who loves to tell a good story about the things he sees, hears, and tastes, and about the people he meets. Think of the chapters as potato chips; you can't read only one."—O. M. Brack Jr.

"This book is a delight-historically sweeping, informative, and crisply written. In it, William Starr treats us to his personal journey of discovery through the Scottish Highlands and Hebridean and Orkney islands. From an informed American perspective, he blends hilarious and droll reflections on Scotland's history and culture with an affectionate and insightful tracking of the footsteps of Boswell and Johnson in their famous three-month intrepid trek in 1773 through the wilds of the Highlands. Starr transports us with charm and force to this remote corner of the globe where, like Boswell and Johnson, one often feels perched on the very edge of existence."—Peter Martin, author of Samuel Johnson: A Biography and A Life of James Boswell