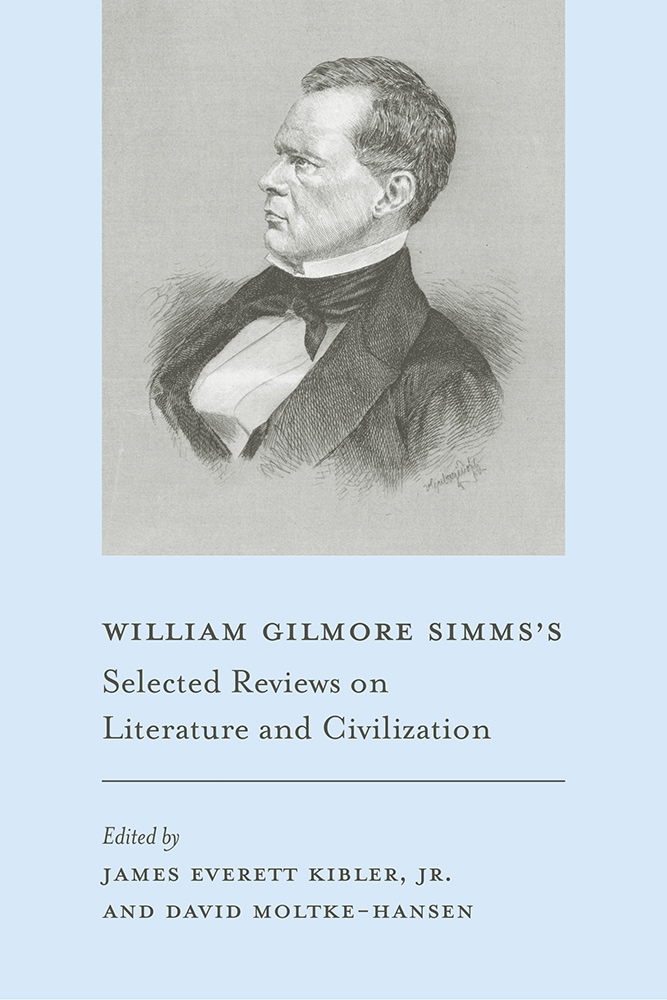 During William Gilmore Simms's life (1806-1870), book reviews and critical essays became vital parts of American literary culture and intellectual discourse. Simms was an assiduous reviewer and essayist, proving by example the importance of those genres. William Gilmore Simms's Selected Reviews on Literature and Civilization publishes for the first time in book form sixty-two examples of the writer's hundreds of newspaper and periodical reviews and book notes as well as four important critical essays. Together, the reviews and essays reveal the regional, national, and international dimensions of Simms's intellectual interests.

To frame the two distinct parts of Selected Reviews, James Everett Kibler, Jr., and David Moltke-Hansen have written a general introduction that considers the development of book reviewing and the authorship of essays in cultural and historical contexts. In part one, Kibler offers an introduction that examines Simms's reviewing habits and the aesthetic and critical values that informed the author's reviews. Kibler then publishes selected texts of reviews and provides historical and cultural backgrounds for each selection. Simms was an early proponent of the critical theories of Romantics such as William Wordsworth, Samuel Taylor Coleridge, and Edgar Allan Poe. Widely read in European history and literature, he reviewed works published in French, German, and classics in original Greek and Latin and in translation. Simms also was an early, ardent advocate of works of local color and of southern "backwoods" humorists of his day. Simms published notices of seven of Herman Melville's novels, the writings of Ralph Waldo Emerson, and favorably reviewed Henry David Thoreau's Walden; or, Life in the Woods.

Simms published numerous review essays of twenty thousand or more words in literary journals and also republished two collections in book form. These volumes treated such subjects as Americanism in literature and the American Revolution in South Carolina. Yet, as part two of Selected Reviews demonstrates, Simms ranged much more widely in the intellectual milieu. Such cultural and political topics as the 1848 revolution in France, the history of the literary essay, the roles of women in the American Revolution, and the activities of the southern convention in Nashville in 1850 captured Simms's attention. Moltke-Hansen's introduction to part two examines Simms's roles in, and responses to, the Romantic critical revolution and the other revolutions then roiling Europe and America.


James E. Kibler, Jr., has published or edited six volumes on Simms, the most recent of which is Selected Poems of William Gilmore Simms: Twentieth Anniversary Edition, also published by the University of South Carolina Press. His edition of Simms's Woodcraft is forthcoming. He is the founding editor of the Simms Review, now in its twentieth year. Kibler is also the author of four works of fiction, a collection of poetry, and Our Fathers' Fields: A Southern Story, published by the University of South Carolina Press and for which he was awarded the prestigious Fellowship of Southern Writers Award for Nonfiction.

David Moltke-Hansen is the former head of the South Carolina Historical Society, the Southern Historical Collection, and the Historical Society of Pennsylvania, and he served as the founding director of the digital William Gilmore Simms Initiatives of the University of South Carolina. Moltke-Hansen has edited History and Women, Culture and Faith: Selected Writings of Elizabeth Fox-Genovese Volume 3—Intersections: History, Culture, Ideology and William Gilmore Simms's Unfinished Civil War: Consequences for a Southern Man of Letters, published by the University of South Carolina Press.

"The present volume is a welcome exception and does much to restore William Gilmore Simms to his proper place as the South's leading man of letters before, during, and after the war."—Dr. Eldred E. Prince, Jr., Professor of History and Director of the Wacamaw Center for Cultural and Historical Studies at Coastal Carolina University

"Finely edited and handsomely produced, this important collection of hard-to-find reviews by the antebellum South's leading man of letters will benefit anyone interested in the literature and culture of nineteenth-century America. For those interested in southern literary culture, this volume confirms Simms's reputation as a prominent intellectual. But as this valuable collection demonstrates beyond any doubt, Simms also played a key role in the broader transatlantic debates over romanticism, publishing reviews of work by Poe, Melville, Hawthorne, Tennyson, Dickens, and many other leading authors."—Jonathan Daniel Wells, author of Women Writers and Journalists in the Nineteenth-century South

"William Gilmore Simms ventured many genres (the novel, the romance, poetry, history, biography), but may have been best at criticism. By making accessible his judgments, both trenchant and wayward, Kibler and Moltke-Hansen have rendered a service to those wishing to understand American literary criticism and Southern ideas."—Michael O'Brien, University of Cambridge

"While William Gilmore Simms has always been known primarily for his fiction, famous especially for historical novels set in the era of the American Revolution, he was in his own day a leading man of letters, editor, critic, essayist. His reviews and critical essays collected here show a remarkable range of interest and expertise, and his opinions stand the test of time. A welcome volume."—Robert Morgan, author of The Road From Gap Creek

"The 'southern values' that heated the cultural wars of antebellum America and would erupt in Civil War receive no more careful articulation than in the literary commentaries and cultural essays of the South's foremost public intellectual, William Gilmore Simms. The most trenchant of these have been collected in William Gilmore Simms's Selected Reviews on Literature and Civilization edited by James Everett Kibler, Jr., and David Moltke Hansen."—David S. Shields, McClintock Professor, University of South Carolina

"While working on Moby-Dick, Herman Melville famously noted that 'there are hardly five critics in America; and several of them are asleep.' As this terrific round-up of his criticism reveals, William Gilmore Simms was one of the few who were very much awake (even if he did find Moby-Dick 'sad stuff, dull and dreary, or ridiculous'). For all that has been written on Simms, we may have the fullest sense of his intellectual commitments here in the cut-and-thrust world of America's nascent literary criticism."—Stephen Berry, Amanda and Greg Gregory Professor of the Civil War Era, Department of History, University of Georgia