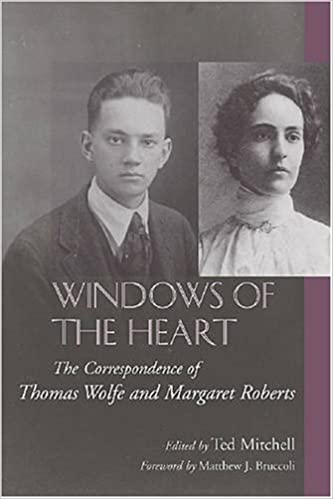 Windows of the Heart

The Correspondence of Thomas Wolfe and Margaret Roberts

Thomas Wolfe remains one of the least understood of the major twentieth-century American writers, but his relationship with his most influential teacher sheds new light on his creative genius and on the nurture of creativity in general. Edited by Ted Mitchell, Windows of the Heart collects seventy-five letters exchanged between Wolfe and Margaret Roberts, the grade-school teacher he called "the mother of my spirit," and follows the ebb and flow of their complex relationship. By turns encouraging, revealing, and painful, their letters document one of the most important forces in the novelist's life.

When Wolfe entered a writing contest at age eleven, Roberts easily identified the young boy's literary potential. From that moment forward she became his most ardent supporter. His teacher for four years, she awakened in him a love for fine literature and a belief in his abilities. Wolfe later described the years under her tutelage as "the happiest and most valuable years of my life."

Published for the first time in their entirety and supplemented with forty-two photographs, the letters between teacher and student portray Roberts's significance to Wolfe and provide important clues to his process of fictionalization. Wolfe confides to Roberts—as he can to no one else—about fame, his writing, his life, his affair with Aline Bernstein, and his interactions with editor Maxwell Perkins.

Their correspondence builds to the publication of Look Homeward, Angel. After seventeen years of an intense and loving relationship, Roberts feels betrayed by the novel's satiric portrayal of her husband and his family. Their communication stops for seven years, but in a testament to her love for Wolfe, Roberts eventually reinitiates a correspondence that lasts until his death.

In addition to Mitchell's insightful introduction, the letters are augmented by a foreword from Matthew J. Bruccoli, a leading authority on the House of Scribner and its authors.

"Windows of the Heart is an intimate and illuminating self-portrait of a major writer's development, as revealing in its way as Joyce's A Portrait of the Artist as a Young Man. The letters from Margaret Roberts to her former pupil are fascinating as well, showing how invaluable her teaching and support were. This book is an important contribution to our understanding of Thomas Wolfe and should do much to bring attention back to a writer unjustly neglected in recent decades."—Ron Rash

"The letters and excellent footnotes that Mitchell provides offer insights into Margaret [Roberts,] a 'feeling' appreciator of lituerature, who represents a model of teaching; into Wolfe's career-related struggles and self-definition; into his voracious reading, and his commentaries; and into his the eventual re-establishment of Tom's and Margaret's relationship."—Asheville (N.C.) Citizen-Times