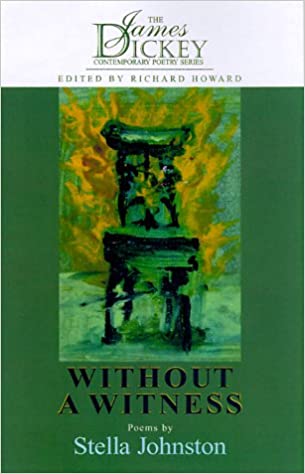 Stella Johnston's poems in Without a Witness invite the reader into widely different places, from the nightmarish landscape of a morphine hallucination, to the last few moments of a Gary Cooper western, to the bedside of a dying Roman emperor in a field tent in Persia. The acute perception—whether one of pain, joy, grief, remorse, or relief—figures in every poem's attempt to hold onto something essential. At times, moments of loss become almost indistinguishable from moments of enlightenment; even terrible cruelty turns into the ironic counterpart to knowledge by which something, after all, is gained. For Johnston, language provides the means to pursue relentlessly that singular detail or sequence of images or events that may reveal, in the contexts provided by experience, the luminous underside of human perception. Whether meditating along the lines of complete global catastrophe as prophesied in Aztec symbology, or reflecting on a terminally ill man's visit to a live sex show in Paris, or responding to a little girl's morbid grief about a doll lost in a backyard fire, each poem is finally an affirmation of the will to embrace life no matter what, no matter how.

Stella Johnston was born in Dallas, Texas, in 1959. She holds a masters of arts in creative writing and literature from the University of Houston, where she now works as an academic adviser, and an M.F.A. in creative writing from Arizona State University. Her poems have appeared in the Paris Review, the New Republic, and Western Humanities Review, among other periodicals. Without a Witness is her first collection of poems.