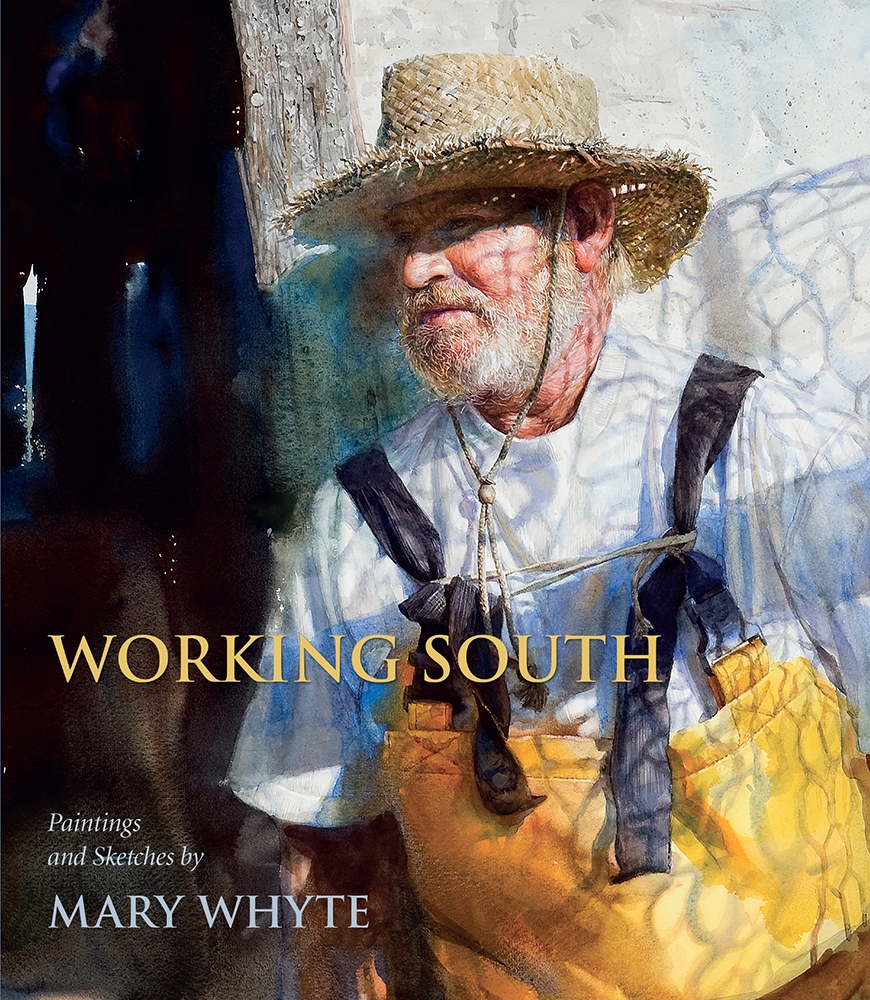 Paintings and Sketches by Mary Whyte

In Working South, renowned watercolorist Mary Whyte captures in exquisite detail the essence of vanishing blue-collar professions from across ten states in the American South with sensitivity and reverence for her subjects. From the textile mill worker and tobacco farmer to the sponge diver and elevator operator, Whyte has sought out some of the last remnants of rural and industrial workforces declining or altogether lost through changes in our economy, environment, technology, and fashion. She shows us a shoeshine man, a hat maker, an oysterman, a shrimper, a ferryman, a funeral band, and others to document that these workers existed and in a bygone era were once ubiquitous across the region.

"When a person works with little audience and few accolades, a truer portrait of character is revealed," explains Whyte in her introduction. As a genre painter with skills and intuition honed through years of practice and toil, she shares much in common with the dedication and character of her subjects. Her vibrant paintings are populated by men and women, young and old, black and white to document the range Southerners whose everyday labors go unheralded while keeping the South in business. By rendering these workers amid scenes of their rough-hewn lives, Whyte shares stories of the grace, strength, and dignity exemplified in these images of fading southern ways of life and livelihood.

Working South includes a foreword by Martha Severens, curator of the Greenville County Museum of Art in Greenville, South Carolina.


Watercolor artist Mary Whyte is a teacher and author whose figurative paintings have earned national recognition. A resident of Johns Island, South Carolina, Whyte garners much of her inspiration from the Gullah descendents of coastal Carolina slaves who number among her most prominent subjects. Her portraits are included in numerous corporate, private, and university collections, as well as in the permanent collections of South Carolina's Greenville County Museum of Art and the Gibbes Museum of Art in Charleston. Her paintings have been featured in International Artist, Artist, American Artist, Watercolor, and American Art Collector, L'Art de Aquarelle, and numerous other publications. Whyte is the author of Alfreda's World, a compilation of her Gullah paintings, as well as An Artist's Way of Seeing and Watercolor for the Serious Beginner. Her work can be found at Coleman Fine Art in Charleston.

"Mary Whyte is a consummate watercolor painter. She maintains proficient control of her medium, indeed making it appear effortless, and presents her subjects with dignity and respect. Without ever falling into pathos, she elevates the lifelong calling of outwardly ordinary people to the highest level of fine art."—Jean Stern, executive director, the Irvine Museum, Irvine, California

"Mary Whyte is a magnificent artist who has mastered watercolor—one of the most difficult of all painting mediums. Here, she shows us phenomenal skill in portraying rural southern life with an empathy that celebrates the spirit of her subjects, their great passion for their work, and their resilience in facing life's hurdles. Her written narratives which accompany these images are as delightful, tender, and moving as the art itself."—Jonathan Green, southern artist

"Whyte shares incredibly moving portraits of southerners who work on the edge—invisible to mainstream America. Through her paintings, sketches, and text, she captures workers like an oyster shucker in Urbanna, Virginia; a boatbuilder in Bayou la Batre, Alabama; and an elevator operator in Jackson, Mississippi. She celebrates and honors their lives in this truly memorable volume."—William R. Ferris, Center for the Study of the American South, University of North Carolina at Chapel Hill

"Something precious and disappearing that is honored by art has increased chances of being preserved—and honored anew. Mary Whyte's magical and elegant paintings and sketches do battle with that great modern two-faced robber : technology."—Clyde Edgerton, Southern author and artist

"Working South is not only the title of a recent body of work by Mary Whyte, but also a metaphor for her personal transition from the North to the South. Through her art and sincere personality, she has worked her way into the hearts and minds of southerners, whether natives or recent arrivals. Like the many sitters in her paintings, Whyte is emblematic of a New South, except for the fact that her subjects represent industries that are shrinking, if not disappearing, while her reputation and horizons are ever expanding."—Martha Severens, curator, Greenville County Museum of Art, from the foreword