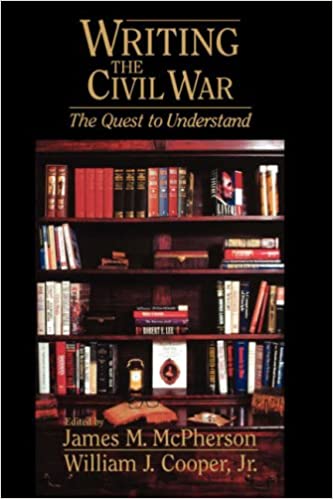 The Quest to Understand

Studies diverse topics on the writing of Civil War history

No event has transformed the United States more fundamentally—or been studied more exhaustively—than the Civil War. In Writing the Civil War, fourteen distinguished historians present a wide-ranging examination of the vast effort to chronicle the conflict—an undertaking that began with the remembrances of Civil War veterans and has become an increasingly prolific field of scholarship. Covering topics from battlefield operations to the impact of race and gender, this volume is an informative guide through the labyrinth of Civil War literature. The contributors provide authoritative and interpretive evaluations of the study and explication of the struggle that has been called the American Iliad.

Writing the Civil War demonstrates the richness and diversity of Civil War scholarship and identifies topics yet to be explored. Noting a surprising dearth of scholarship in several area, the essays point to new directions in the quest to understand the complexities of the most momentous event in American history.


James M. McPherson is the author of Battle Cry of Freedom: The Civil War Era, which won the Pulitzer Prize in history in 1989, and For Cause and Comrades: Why Men Fought in the Civil War, the 1998 winner of the Lincoln Prize. He is the George Henry Davis Professor of American History at Princeton University and lives in Princeton.

William J. Cooper, Jr., is the Boyd Professor of History at Louisiana State University. His books include Jefferson Davis, American; Liberty and Slavery: Southern Politics to 1860; The South and the Politics of Slavery, 1828–1856; and The Conservative Regime: South Carolina, 1877–1890. He is also coauthor of The American South: A History. Cooper lives in Baton Rouge, Louisiana.

"The twelve essays in this volume fill a real void in providing a polished, up-to-date assessment of the historiography on that terrible conflict."—Virginia Magazine

"All of these essays are worthwhile; several are exceptional in that they contain substantive data and the essayists' insights with respect to their subjects."—American Historical Review

"Writing the Civil War is a substantial contribution to American historiography, and every Civil War historian should consult it."—The North Carolina Historical Review

"This book is a treasure trove of analysis and suggestions for further research. It should be read and re-read by all students of the war."—The Civil War News

"a valuable survey of the state of the literature and a necessary volume for any scholar who works in nineteenth-century American history."—The Journal of American History

"I was fascinated by this superb collection, which not merely summarizes the vast literature on disputed points concerning the Civil War but also offers new insights and suggestions for further research. Every student of the Civil War must have Writing the Civil War in his library."—David Herbert Donald