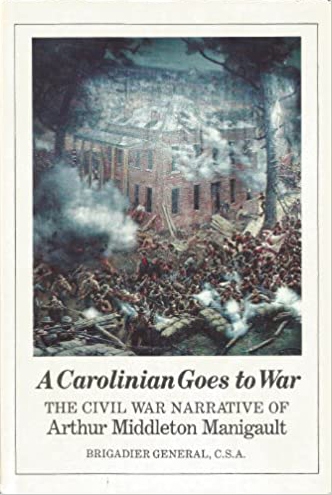 A Carolinian Goes to War

Over a hundred years have passed since Arthur Middleton Manigault came home from the Civil War and sat down to write his memoirs. He never intended anyone outside his family circle to read his words and until now, no one has.

We are indebted to the descendants of General Manigault for sharing their legacy with us. R. Lockwood Tower has edited the narrative, resulting in a brilliant account of the major campaigns of the western front, from the debacle immediately following Shiloh the last gasp at Franklin and Nashville.

Arthur Middleton Manigault, of a find old Charleston family, was especially qualified to chronicle these years: as a general he was privy to information those of lower rank did not have; as a sensitive, careful observer, he describes more than just battlefield logistics; and as a well-educated writer, he was able to put it all into words that are a delight to read.


R. Lockwood Tower was raised by a maiden aunt who remembered the day Lincoln was shot and described to the young boy the horrors of the Wilderness. Fascinated by the events of the Civil War, Tower spent his life collecting and establishing one of the finest private libraries on the subject. A chance meeting in Charleston between the Civil War authority and one of Manigault's grandsons led to the publication of the general's memoirs.

"A Carolinian Goes to War is a superb book. Actually, it's two superb books. One book is the narrative of Confederate Brigadier General Arthur Middleton Manigault. Manigault's book covers his service as a brigade commander with the Army of Tennessee from the spring of 1862 until the late fall of 1864. . . . Although a Charlestonian gentleman, he pulls no punches as he discusses his superiors and peers. We know whom he liked, whom he disliked, and why. Through his words, we see why the western war was lost by the Confederacy. But it is not an embittered story. Manigault was writing for his sons, not for publication, and his pen prints a strong spectrum of life in the Confederate Army, both in battle and out, as well as a travelogue of the areas he marched through. Manigault was a keen observer, a bold warrior and a precise chronicler, and he shares the fruits of these traits in a flowing, easy to read style. . . . The second book is editor R. Lockwood Tower's prefaces to each of Manigault's chapters. Tower draws a map for us to follow the story that Manigault tells. Tower gives us the view from the hill of history."—