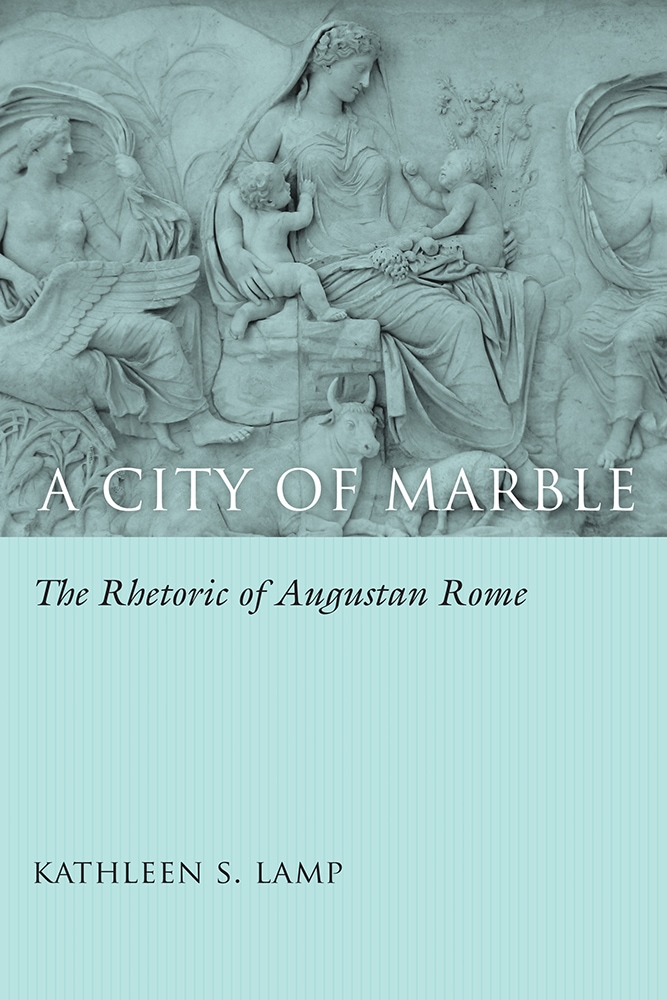 A City of Marble

The Rhetoric of Augustan Rome

Lamp begins by studying rhetorical treatises, those texts most familiar to scholars of rhetoric, and moves on to those most obviously using rhetorical techniques in visual form. She then arrives at those objects least recognizable as rhetorical artifacts, but perhaps most significant to the daily lives of the Roman people—coins, altars, wall painting. This progression also captures the development of the Augustan political myth that Augustus was destined to rule and lead Rome to greatness as a descendant of the hero Aeneas.

A City of Marble examines the establishment of this myth in state rhetoric, traces its circulation, and finally samples its popular receptions and adaptations. In doing so, Lamp inserts a long-excluded though significant audience—the common people of Rome—into contemporary understandings of rhetorical history and considers Augustan culture as significant in shaping civic identity, encouraging civic participation, and promoting social advancement.

Lamp approaches the relationship between classical rhetoric and Augustan culture through a transdisciplinary methodology drawn from archaeology, art and architectural history, numismatics, classics, and rhetorical studies. By doing so, she grounds Dionysius of Halicarnassus's claims that the Principate represented a renaissance of rhetoric rooted in culture and a return to an Isocratean philosophical model of rhetoric, thus offering a counterstatement to the "decline narrative" that rhetorical practice withered in the early Roman Empire. Thus Lamp's work provides a step toward filling the disciplinary gap between Cicero and the Second Sophistic.

". . . Lamp does a superlative job of classical outreach. She brings antiquity in a very accessible package to non-specialists . . . well illustrated and clearly written."—The Journal of Roman Studies

"Lamp's insightful analyses of material culture in the Augustan era read through a rhetorical lens will be much welcomed in our expanding field. But the greater power of City of Marble lies in Lamp's provocative argument for reassessing the rhetorical achievement of the first emperor himself: a potentially controversial approach of interest to any student of communication between rulers and the ruled."—Susan C. Jarratt, chair of Comparative Literature and of Women's Studies, University of California, Irvine

"Through groundbreaking analyses of Augustan rhetoric in such media as monumental art (the Ara Pacis), architectural spaces (the Forum of Augustus), and coins — and 'responses' to that rhetoric in popular art and parody — Kathleen Lamp's A City of Marble dispels the image of a decline of rhetoric under the principate and makes a strong case for 'renaissance.'"—Jeffrey Walker, Professor and Chair, Rhetoric and Writing, University of Texas at Austin

"As Kathleen S. Lamp reveals, Augustus and his contemporaries not only transformed Rome from 'brick to marble' but rhetoric as well. Challenging conventional views of rhetoric's decline as Rome moved from Republic to Empire, A City of Marble: The Rhetoric of Augustan Rome provocatively argues that the cultural and building programs of the Principate are best understood as conscious manifestations of visual and material rhetoric. Innovative, well written, and insightful, A City of Marble is a 'must read' recommendation!"—Richard Leo Enos, Piper Professor, Lillian Radford Chair of Rhetoric and Composition, Texas Christian University