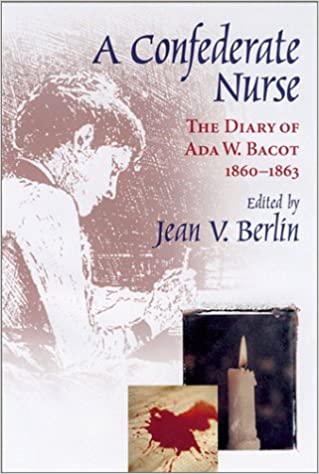 Although the Civil War was the first major American conflict in which women nurses played a significant role, the dearth of information about these women makes the diary of a Southern medical worker an especially important document. A Confederate Nurse records the daily experiences, hardships, and joys of Ada W. Bacot, a plantation owner and childless widow whose Southern patriotism prompted her to leave her native South Carolina to care for wounded Confederates in Charlottesville, Virginia. Bacot's journal sheds light on her own experiences and also on the themes that dominated the lives of Southern white women throughout the nineteenth century. A Confederate Nurse reveals the Confederate nationalism that motivated some Southern women and the work these women performed to sustain the war effort.

Jean V. Berlin is coeditor of Sherman's Civil War: Selected Correspondence of William T. Sherman, 1860–1865. A graduate of Haverford College and the University of Virginia, she has taught history at Wofford College in Spartanburg, South Carolina. Berlin lives in Chandler, Arizona.

"Provides a rather rare glimpse into the Civil War as seen through the eyes of a southern woman from the planter and slaveholding class. Scholars and the general public alike will find A Confederate Nurse an entertaining and illuminating book, which will hopefully serve as a catalyst for future studies of Civil War nursing. This will broaden our understanding of the war and of nineteenth-century life in general."—Southern Historian

"Bacot's diary provides fascinating insights both into extraordinary events and into everyday life. The editor of Bacot's diary, Jean V. Berlin, does a superb job of both annotating and analyzing the text"—Georgia Historical Quarterly

"Berlin emphasizes the importance of Southern women's contribution to the war effort."—Publishers Weekly

"Berlin . . . has selected entries from the Civil War diaries of a devout and intelligent slaveowner whose wartime nursing experiences proved both fulfilling and liberating."—Library Journal

"Berlin has done an excellent job of providing insights through the footnotes; most obvious are the contradictions between the war's realities and the news reports Bacot received. In a diary filled with names, the editor included pertinent details about many persons, but does not overwhelm her readers with an attempt to identify each individual mentioned. Berlin has contributed a worthy addition to the Women's Diaries and Letters of the Nineteenth-Century South series, by introducing her readers to a true Southern lady"—Register of the Kentucky Historical Society

"an important document of the opportunities for and limits of female citizenship in the Confederacy .the diary provides a needed perspective on the effects of war beyond the battlefields. Ada Bacot's journal and the series of which it is a part add to our knowledge of Confederate women's experiences during a critical period of national transformation."—The Virginia Magazine

"Editor Jean Berlin's additions to the book—introduction, footnotes, and epilogue—provide information necessary for the reader to understand Ada Bacot's life before and after the war, and to know the places and people mentioned throughout the diaries. These additions, and Berlin's meticulous editing in which she maintains Ada's quaint spellings and wording, make this a thoroughly scholarly and fascinating picture of the life and wartime experiences of one confederate nurse."—Bulletin of the History of Medicine

"This touching, informative book will appeal to both scholars and general readers alike"—Civil War News