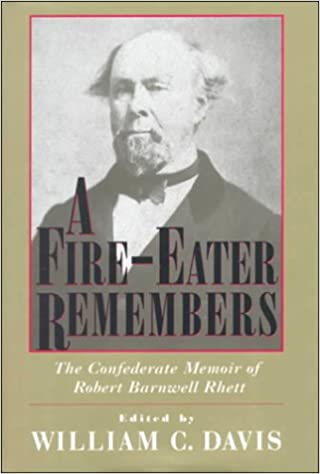 A Fire-Eater Remembers affords an unprecedented look at the secession crisis and the formation of the Confederacy as seen through the eyes of the man some called the Father of Secession. Never before published, Robert Barnwell Rhett's personal account of the years 1859 through 1865 is the most complete memoir to have survived from any member of South Carolina's Secession Convention and the Confederate Provisional Congress. Like Rhett, the writings are opinionated, contentious, arrogant, and unforgiving. They reveal much of Rhett's inside view of the effort to separate from the Union, and they depict his participation in the founding of the Confederacy.

William C. Davis illuminates Rhett's role in secession's timing and passage. He tells of Rhett's interest in secession doctrine as early as 1828 and his outspoken support of disunion fully a quarter-century before 1861. Rhett's memoir recounts in vivid detail the framing of the Confederate constitution, the daily activities of the Confederate Congress, and the election of Jefferson Davis as president—a post that Rhett himself believed he deserved. Rhett became an acknowledged leader of the anti-Davis faction, and his memoir records the extent and basis of his opposition to the Confederate president as well as his involvement with dissident generals and politicians who shared an aversion to Jefferson Davis.

Presented as Rhett composed it, the volume includes the southerner's thoughts on the nature of free government, his advocacy of free trade, and his gloomy forecast for the future of the Union after war and Reconstruction. Although no portion of this memoir has been previously published, it served as a model for such famous Confederates as P. G. T. Beauregard and Joseph E. Johnston, who read parts of it while writing their personal accounts of the war.


William C. Davis is the author or editor of nearly fifty books on Civil War and southern history. For many years the editor and publisher of Civil War Times magazine, he divides his time between consulting on the production of film and television documentaries and writing books for publishers in the United States and England. Davis lives in Mechanicsburg, Pennsylvania.