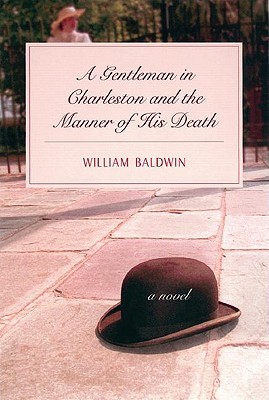 A Gentleman in Charleston and the Manner of His Death

A cautionary tale of lust, violence, and honor from the award-winning author of The Hard to Catch Mercy

Once deemed "the most powerful man in the South," Charleston newspaper editor Frank Dawson met his violent death on March 12, 1889, at the hands of his neighbor, a disreputable doctor who was attempting to seduce the Dawson family governess. Drawn from events surrounding this infamous episode, the third novel from the Lillian Smith Award-winning William Baldwin pulls back the veil of a genteel society in a fabled southern city and exposes a dark visage of anger and secret pain that no amount of imposed manners could restrain, and only love might eventually heal.

With a southern storyteller's passion for intricate emotional and physical details, Baldwin, through the fictional guise of Capt. David Lawton, chronicles editor Dawson's fated end. Having survived three years of bloody Civil War combat and the decade of violent Reconstruction that followed, the liberal-minded Lawton is now an embattled newspaperman whose national importance is on the wane. Still, he remains a celebrated member of Charleston's elite, while in private life moving amid a pantheon of proud and beautiful women—Sarah, his brilliant wife; Abbie, his sensual sister-in-law; Mary, the all-knowing prostitute; and Hélène, the discontented Swiss governess—each contributing to an unfolding drama of history-haunted turmoil.

Though Lawton loathes the South's cult of personal violence, by the customs of his era and place he is duty-bound to protect his household. Unable to act otherwise, Lawton meets his rival in a brutal physical contest, and in the aftermath, Sarah, Abbie, Mary, and Hélène must make peace with their own turbulent pasts.

War, earthquake, political guile, adultery, illegitimacy, lust, and murder—all the devices of gothic romance—play a role in this tale closely based on the lives of Charlestonians who lived these events over a century ago.


A lifelong resident of the South Carolina lowcountry, William Baldwin has worked as a commercial fisherman, a building contractor, and a professional writer. His previous books include Mrs. Whaley and Her Charleston Garden, The Fennel Family Papers, Heaven Is a Beautiful Place, and The Hard to Catch Mercy—winner of the Lillian Smith Award and the Dictionary of Literary Biography Yearbook Award and a finalist for the Southern Circle Critics Award. Baldwin lives in McClellanville.

"Using language evocative of the period, the author carefully depicts a historical southern city where the past overshadows the present, and where personal codes of honor, designed to preserve decorum in polite society, ironically end up destroying it."—Booklist

"Strange, quirky, and always compelling, William Baldwin again proves himself to be a writer uniquely adept at bridging high art with the wild ride of a page-turning southern yarn. A Gentleman in Charleston and the Manner of His Death gives us Baldwin in top form, combining emotional drama with physical struggle for his impressively large and distinctly genuine cast of characters, all set against the sprawling historical backdrop of Charleston on the cusp of our modern age."—Bret Lott

"William Baldwin is that rare southern writer who writes for all people of all time. As I read his beautiful words in A Gentleman in Charleston and the Manner of His Death I walked the Holy City's streets with my ancestors and, believe me, I never wanted the trip to end. This is an important book and a wonderful rich story."—Dorothea Benton Frank

"Baldwin's novel is historical fiction at its most compelling: a story as full of suspense as of high literary merit. The texture of late-nineteenth-century Charleston is made palpable, from the grand houses around the Battery to the Negro slums, from the insularity of Old Families and Old Money to the lives of maids, governesses, prostitutes, and children, from the smoldering violence embedded in the code of honor to the ways of southern juries at the turn of the century."—Janette Turner Hospita