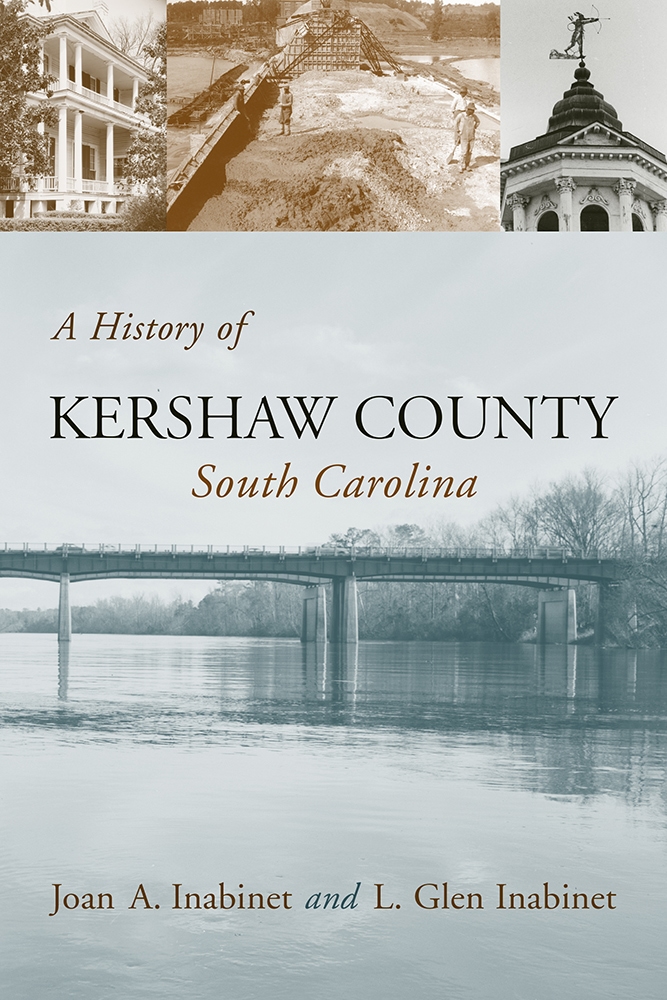 A History of Kershaw County is a much anticipated comprehensive narrative describing a South Carolina community rooted in strong local traditions. From prehistoric to present times, the history spans Native American dwellers (including Cofitachiqui mound builders), through the county's major roles in the American Revolution and Civil War, to the commercial and industrial innovations of the twentieth and twenty-first centuries. Joan and Glen Inabinet share insightful tales of the region's inhabitants through defining historical moments as well as transformative local changes in agriculture and industry, transportation and tourism, education and community development.

Kershaw County is home to some of South Carolina's most notable prehistoric sites as well as the state's oldest inland city, Camden, thus giving the region an impressive and richly textured human history. Still the most familiar icon of the county is an early weathervane silhouette honoring the Catawba Indian chief King Hagler for protecting pioneer settlers. An important colonial milling and trading center, Camden was seized by the British under Lord Cornwallis during the American Revolution and fortified as their backcountry headquarters. Eight battles and skirmishes were fought within the modern boundaries of Kershaw County, including the Battle of Camden on August 16, 1780, and the Battle of Hobkirk's Hill on April 25, 1781.

Named for Revolutionary War patriot Joseph Kershaw, the county was created in 1791 from portions of Claremont, Fairfield, Lancaster, and Richland counties. Kershaw County developed its local economy through plantation agriculture, an enterprise dependent on African slave labor. Distinctive homes were built on rural plantations and in Camden, and a village of well-to-do planters grew up at Liberty Hill. Six Confederate generals claimed the county as their birthplace, and the area also was home to Mary Boykin Chesnut, acclaimed diarist of the Civil War.

In their descriptions of Kershaw County in modern times, the Inabinets chronicle how the railroad and later U.S. Highway 1 brought opportunities for the expansion of tourism and led to Camden's development as a popular winter resort for wealthy northerners. Small towns and villages emerged from railroad stops, including Bethune, Blaney (later Elgin), Boykin, Cassatt, Kershaw, Lugoff, and Westville. The influx of new money coupled with local equestrian traditions led to an enthusiasm for polo and the creation of the Carolina Cup steeplechase at the Springdale Course.

Aside from early developments in textile manufacturing, industrialization proceeded slowly in Kershaw County. The completion of the Wateree Dam in 1919 gave the region a valuable source of electricity as well as much-needed flood control and a popular new recreational area in Lake Wateree. Despite these incentives for new industry, agricultural ways of life continued to dominate until World War II influenced advances in aviation, communication, and industrialization. In describing these changes, the Inabinets map the circumstances surrounding the building of the DuPont plant which opened in 1950 and the expansion of several other industries in the area.

Through perceptive text and more than eighty images, this first book-length history of Kershaw County illustrates how the region is steeped in a rich history of more than two centuries of struggles and accomplishments in which preserving lessons of the past holds equal sway with welcoming opportunities for the future.


A native of Camden and graduate of Winthrop College and the University of South Carolina, Joan A. Inabinet is a retired high school English teacher. Now a freelance writer and editor, she is a former president and board member of the Kershaw County Historical Society, for which she serves as newsletter and Web site editor. She has written or edited seven previous local history works, two in collaboration with her husband, L. Glen Inabinet.

"Joan and Glenn Inabinet's new book provides a fascinating glimpse of the rich history of Kershaw County and is a fine addition to the history of our state."—Walter Edgar, author of South Carolina: A History and editor of The South Carolina Encyclopedia

"Illuminating and often poignant details enrich the Inabinets' broadly conceived history of an important inland area of South Carolina with a long and varied past. Accordingly, this comprehensive, well written, and substantively significant history of Kershaw County will interest a wide range of readers, from inquisitive browsers to scholars."—Robert M. Weir, author of Colonial South Carolina: A History