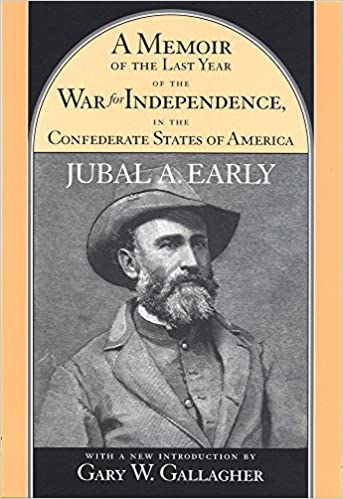 A Memoir of the Last Year of the War for Independence, in the Confederate States of America

The first veteran's memoir to be published on either side, following the end of the Civil War

Jubal Anderson Early (1816-1894) ranked among the most important generals who fought with Robert E. Lee's Confederate Army of Northern Virginia. A brigade and corps commander, he played principal roles at the battles of First Manassas, Chancellorsville, Gettysburg, and most of the other engagements in the Eastern Theater during the first three years of the Civil War. In 1864 Early commanded an army in the Shenandoah Valley, winning several victories and menacing Washington before suffering ignominious defeat in a series of battles against Phillip H. Sheridan's Union forces. Early's long and active postwar career was marked by writings devoted to redeeming the South's reputation from the stain of military defeat. Encouraged by Lee and others who wanted the Confederate version to be on record as soon as possible, Early quickly completed a personal account of the last year of the war.

Originally released in 1866, Early's is the first reminiscence published by a major Civil War figure on either side. A creator of the Lost Cause myth that exalted Lee and his Virginia army above those of other states, Early anticipated arguments that later Lost Cause writers would make regarding Lee's and Grant's generalships, the reasons for Confederate defeat, and the conduct of Union forces in Southern states. Containing elements of both battlefield narrative and apologia for his actions and those of other Virginians, Early's brief memoir helped shape the ways in which white southerners wrote about and understood the Confederacy. In a new introduction to this edition, Gary W. Gallagher explicates Early's military career and examines the general's postwar career as a Confederate apologist.