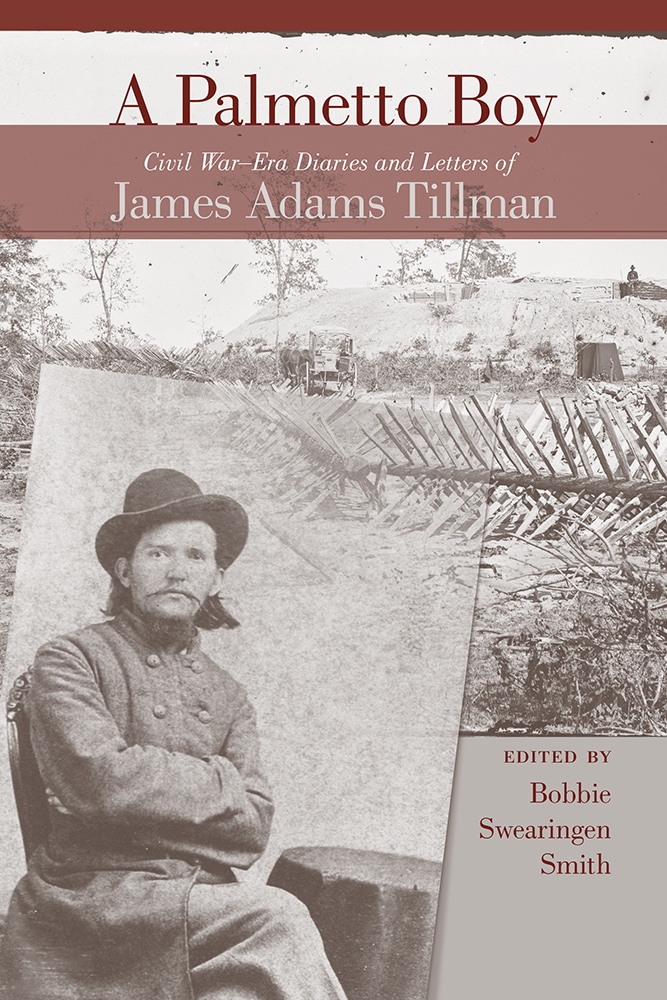 The Tillman family of Edgefield, South Carolina, is forever linked to Palmetto State history, but not all of its members have yet had their stories told. James Adams Tillman (1842-1866) never had the chance to become a governor or U.S. senator like his younger brother "Pitchfork" Ben or a U.S. congressman like his older brother George. But, like his more famous siblings, James also dedicated his life to the service of his community and state—a dedication that led to his death at the young age of twenty-four from injuries sustained during the Civil War. Overshadowed in the annals of history by his brothers, James has largely been unrecognized until now. Edited by Bobbie Swearingen Smith, these collected diary entries and family letters offer a significant historical record of the Civil War era as experienced by a steadfast representative of this prominent South Carolina family and offer meaningful insights into James's brief life and ultimate sacrifice.

At nineteen James Tillman had completed secondary school and had intentions to pursue a teaching career when the outbreak of the Civil War changed his priorities. Tillman enlisted with the Twenty-fourth South Carolina Volunteer Infantry of Edgefield and attained the rank of captain during the war. He was initially stationed along the coastal defenses south of Charleston and fought in both battles of Secessionville in 1862. He was wounded at Chickamauga in 1863, and his mother and brother Ben brought him home to recover. Tillman returned to duty and spent much of 1864 under the command of General Joseph E. Johnston in Tennessee and North Carolina, retreating from General Sherman's advance. At the war's end, Tillman returned home crestfallen and witnessed the rough onset of Reconstruction, writing in his diaries about those he saw as descending on South Carolina to profit from the defeated South. In June 1866, a little more than a year after his discharge, he died of complications from his combat wounds.

Through the combination of Tillman's diaries and letters, the modern reader is invited to share in both the immediacy of his thoughts from the war front and his contemplative expressions of those experiences for his home-front audience of family members. Tillman's personal narrative adds another layer to our understanding of the historical significance of the Tillman family and offers a compelling firsthand account of the motivations and actions of a young South Carolinian at war as he struggled to find sense in the midst of unfathomable chaos.


Bobbie Swearingen Smith (1931–2009), the grandniece of James Adams Tillman, was born in Georgia and raised on Tillman family land. Smith was an accountant and published author of short stories and poetry. Her lifelong interest in history led her to explore her ancestor's life and inspired her to share his Civil War correspondence through this book.

"This sweeping story of the Civil War years, as told by the scion of one of South Carolina's most famous families, is as compelling an account of the trials of war as has ever been written. The reader is immersed in the grim reality of a soldier's everyday life and the ultimate horrors of mortal combat. Through reading this book one can come to a much more complete and accurate understanding of the motivations underlying the deep devotion of Confederate soldiers to their cause. Here we also come to see how a soldier grappled with defeat and came back home to rebuild his life upon the ashes of war. This is a must-read for any student of the Civil War."—Bettis C. Rainsford, Edgefield County Historical Society

"Insightful and succinct, James Tillman chronicles his service, his ideas, and his ideals through war and early peace from the end of 1859 through May 1866. Meticulously annotated by Bobbie Swearingen Smith, this rich and vivid collection of diaries and letters deserves a worthy place among Civil War narratives."—Orville Vernon Burton, author The Age of Lincoln and In My Father's House Are Many Mansions: Family and Community in Edgefield County, South Carolina