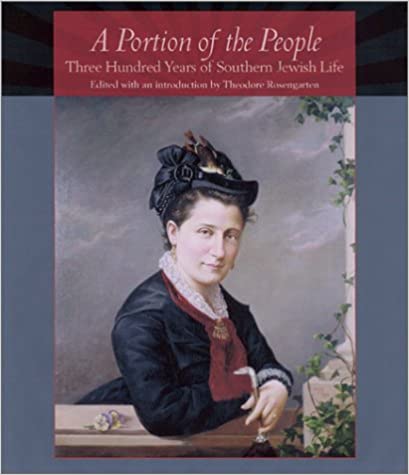 A Portion of the People

A fresh interpretation, in text and illustrations, of Jewish life and culture in the American South

In the year 1800, South Carolina was home to more Jews than any other place in North America. As old as the province of Carolina itself, the Jewish presence has been a vital but little-examined element in the growth of South Carolina's cities and towns, in the economy of slavery and post-slavery society, and in the creation of American Jewish religious identity.

The record of a landmark exhibition that will change the way people think about Jewish history and American history, A Portion of the People: Three Hundred Years of Southern Jewish Life presents a remarkable group of art and cultural objects and a provocative investigation of the characters and circumstances that produced them. The book and exhibition culminate a seven-year collaboration by the Jewish Historical Society of South Carolina, the McKissick Museum of the University of South Carolina, and the College of Charleston.

Edited by Theodore Rosengarten and Dale Rosengarten, with original essays by Deborah Dash Moore, Jenna Weissman Joselit, Jack Bass, and Dale Rosengarten, with a preface by Eli N. Evans, A Portion of the People is an important addition to southern arts and letters. Half the exhibition's 200 objects appear here in color and black-and-white illustrations. Narrative descriptions place the objects in their historical and artistic contexts. Portraits of Jewish citizens prominent in the region's history appear side by side with artifacts that tell of immigration and settlement, adaptation and alienation, success and failure. Just as the Jews in the South tested American freedoms, liberty and tolerance tried the newcomers' adherence to their ancient religion.

A photographic essay by Bill Aron, who has documented Jewish communities around the world, brings the story into the present. His South Carolina photographs reflect major developments of the past fifty years, including the legacy of the Holocaust, postwar prosperity, the challenge of the civil rights movement, and the trend toward increasing religious observance.


Theodore Rosengarten, a teacher, writer, and community activist, holds a B.A. from Amherst College and a Ph.D. from Harvard University. The author of Tombee: Portrait of a Cotton Planter (National Book Critics Circle Award for best biography), All God's Dangers: The Life of Nate Shaw (National Book Award for contemporary affairs), Rosengarten was named a MacArthur Fellow in 1989.

"Until 1830 Charleston was the capital of American Jewry; Christians in South Carolina elected the first professing Jew to office; Reform Judaism first came to the United States in the Palmetto State. These and many other fascinating facts are explored in this handsome treasure trove, a "must-read" for anybody interested in the complex relationship of Jews and the South. Theodore and Dale Rosengarten have lovingly and movingly compiled a masterpiece, a delight for both the mind and the eye."—Philip Morgan, Johns Hopkins University

"This handsome volume, with its lively text and evocative illustrations, illuminates a significant phase of American religious history. The book thereby brings to life an important southern community, whose antecedents will interest scholars and general readers alike. Anyone fascinated by the rich mosaic that makes up America's multicultural society will find its essays a pleasure to read."—Oscar Handlin, Harvard University

"A superb companion to a landmark exhibition, the extraordinarily well documented A Portion of the People is an engaging and insightful chronicle of Carolina Jewry. Celebrating the freedoms and opportunities offered to Jews, and their many achievements, the authors also squarely confront issues of slavery, subsequent race relations, and the challenging realities Jews faced as they sought acceptance in southern society."—Grace Cohen Grossman, Skirball Cultural Center and Museum