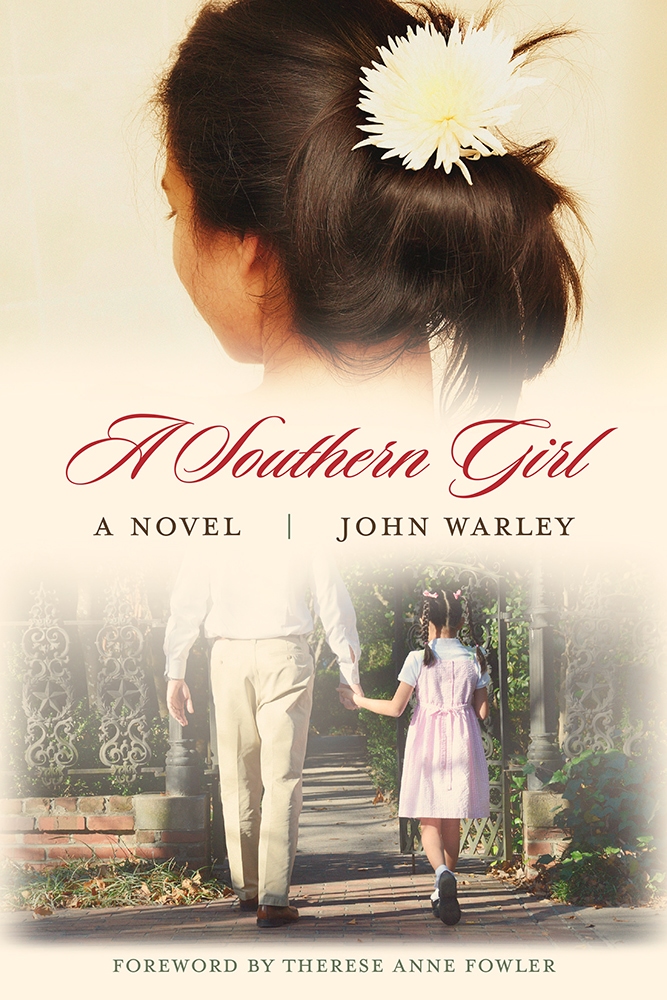 Set against the exquisite, historical backdrop of Charleston's insular South of Broad neighborhood, A Southern Girl is a tale of international adoption and of families lost, then found anew through revelations, courage, and the perseverance of a love without bounds. With two biological sons and a promising career, Coleman Carter seems set to fulfill his promise as a resourceful trial lawyer, devoted husband, and dutiful father until his wife, Elizabeth, champions their adoption of a Korean orphan. This seemingly altruistic mission estranges Coleman's conservative parents and demands that he now embrace the unknown as fully as he has always entrenched himself in the familiar.

Elizabeth, a self-proclaimed liberal with a global sense of duty, is eager for the adoption, while Coleman, a scion of the Old South, is at best a reluctant participant. But the arrival of Soo Yun (later called Allie) into the Carter household and the challenging reactions of Coleman's peers and parents awakens in him a broadening sense of responsibility and dedication to his new family that opens his eyes to the subtle racism and exclusionary activities that had dominated his sheltered life. To garner Allie's entrance into Charleston society, Coleman must come to terms with his past and guide Allie toward finding her own origins as the Carters forge a new family identity and confront generations-old fears inherent in Southern traditions of purity and prestige.

Deftly told through the distinctive voices of Allie's birth mother, her orphanage nurse, her adoptive mother Elizabeth, and finally Coleman himself, A Southern Girl brings us deeply into Allie's plights—first for her very survival and then for her sense of identity, belonging, and love in her new and not always welcoming culture. In this truly international tale, John Warley guides us through the enclaves of southern privilege in New Hampton, Virginia, and Charleston, the poverty-stricken back alleys of Seoul, South Korea, the jungles of Vietnam, and the stone sidewalks of San Miguel de Allende, Mexico, as the bonds between father and daughter become strong enough to confront the trials of their pasts and present alike.


John Warley, a native South Carolinian, is a graduate of the Citadel and the University of Virginia School of Law. He practiced law in Virginia until 1993, when he moved to Mexico to write and teach. Now a full-time writer, Warley divides his time between Beaufort, South Carolina, and San Miguel de Allende, Mexico. His previous books include Bethesda's Child and The Moralist. He and his late wife, Barbara, have three sons, Caldwell, Nelson, and Carter, born in Newport News, Virginia, and a daughter, MaryBeth, born in Seoul, South Korea.

"John Warley's marvelous novel A Southern Girl is the best book I've ever read about Charleston's mysterious and glittering high society. Its affirmation of the enduring power of parental love vying against that enigmatic realm is reverential and stunningly original, as stylish as a novel by John Irving and as tightly written as one by John Grisham. I wish I'd written this book."—Pat Conroy

"A Southern Girl is a heart-wrenching story of personal struggles when a traditional southern family adopts a foreign child. John Warley masterfully chronicles the prejudice, family dramas, and the secret behind-the-smiles politics of an exclusive Charleston society. Asia meets Charleston offers irresistible appeal, like watching a cherry tree and magnolia bloom together outside your window. For serious fans of southern fiction, this is a must-read!"—Mary Alice Monroe, New York Times bestselling author

"John Warley's novel A Southern Girl takes us on a fascinating and powerful emotional journey that proves itself to be a richly rewarding story of life and family. It's simply unforgettable. Congratulations, Mr. Warley!"—Dorothea Benton Frank, New York Times bestselling author of ten novels

"Forget what you know about the South. John Warley serves up a unique perspective and challenges perceptions of the southern belle. A powerhouse of emotion, A Southern Girl explores the depths of parental love and the lengths to which it will go. Warley's words are fresh and urgent and beg you to keep reading."—Nicole Seitz, author of A Hundred Years of Happiness and Beyond Molasses Creek

"Nobody does family pride like a Southerner. But in his balletic, big-hearted new novel, John Warley cajoles and challenges the limits of that pride. Here, it's the beaming, fatherly love awakened by an adopted child that's cause for celebration, rather than one's ancestral silver or membership in the St. Cecilia Society. While reading A Southern Girl—a rebel yell for the traditional, non-traditional family—I was wondrously reminded of theologian Stanley Hauerwas's great line: 'If you want to welcome the stranger, have a child.' No kidding."—Robert Leleux, author of The Memoirs of a Beautiful Boy and The Living End

"With both skill and passion, John Warley carries the reader through generations and countries. Following plot twists and heart-turns, we become a member of many families, loving and loathing as we do in any real family. A Southern Girl is rich with trustworthy and vulnerable narrators who allow us the privilege of entering the secret traditions and lore-soaked South as well as the clandestine corners of the character's souls. This is a gorgeous, heartfelt book from a masterful storyteller; I didn't want to miss a word of Warley's whispered secrets."—Patti Callahan Henry, New York Times bestselling author of And Then I Found You, Coming Up for Air, and others

"John Warley's A Southern Girl is a stunning achievement: a beautifully written and heartfelt account of a father's love for an adopted daughter, and his struggles in helping her find her own identify in an elite yet conflicted society. Based on the author's own experiences, this triumphant story belongs to anyone who has ever loved, grieved, questioned, rejoiced, despaired, and risked it all for the strongest bond of all, that glorious, undefinable unit we call family."—Cassandra King, bestselling author of five novels including Moonrise