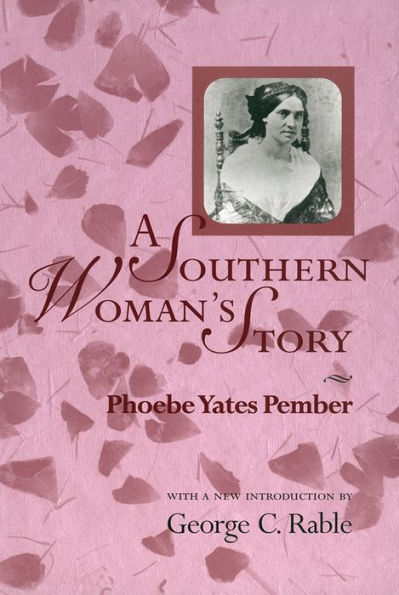 In many ways Phoebe Pember was a representative upper-class gentlewoman. Daughter of a prominent Jewish merchant of Charleston, South Carolina, who moved his family to Savannah, Georgia in the 1850s, she sought ways to help the Southern cause—but she broke all stereotypes by the character and length of her service. Her book is equally distinctive. No dilettante's romance or saccharine Lost Cause tale, it is a remarkably frank treatment of Confederate social and medical history. Pember reports on the gossip and scandals from inside the Confederacy's largest hospital and the embattled city of Richmond, presenting bureaucratic personalities and stock characters with insight and occasional flashes of humor.


Phoebe Yates Pember (1823–1913) was born in Charleston, South Carolina and moved with her family to Savannah, Georgia, in the 1850s. Widowed and childless in 1861, Pember took the post of matron at the Confederate Army's Chimborazo Hospital in Richmond, Virginia. She labored there throughout the war and in 1879 chronicled her experiences in A Southern Woman's Story. Pember was honored by Confederate veterans' organizations in her later years, and in 1995 her portrait appeared on a U.S. Postal Service Civil War commemorative stamp.

George C. Rable is the Charles G. Summersell Professor of Southern History at the University of Alabama, Tuscaloosa. He is the author of The Confederate Republic: a Revolution Against Politics (1994), and his Civil Wars: Women and the Crisis of Southern Nationalism won the 1989 Jefferson Davis Award and 1991 Julia Cherry Spruill Prize.