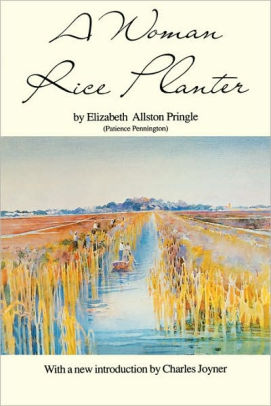 A Woman Rice Planter offers insights into a broad spectrum of Southern life after the Civil War. As an account of a woman's struggle for survival and dignity in a distinctly male-dominated society, it contributes significantly to women's history. It presents a rich portrait of a distinctive place—the South Carolina Low Country—in a troubled and generally undocumented time, a portrait made all the more vivid by the fine pen-and-ink sketches of Charleston artist Alice R. Huger Smith.

Elizabeth Alston Pringle was the daughter of Robert Francis Withers Allston, a state legislator and governor, who was at one time owner of seven plantations but bankrupt at the time of his death. Left to struggle for income to regain the property and position the family held prior to the war, Pringle turned to writing and eventually published a column on Southern culture in the New York Sun under the pseudeonym Patience Pennington. In 1913 she collected and reshaped these newspaper columns and compiled them into one volume, A Woman Rice Planter, a best-selling book that reduced her financial worries. Her descriptions of the vagaries of rice planting, of her relationships with former slaves and the first generation of free-born African Americans, and of her life in the early Reconstruciton period are important to our understanding of the prevailing attitudes and persistence of the Old South in the New.

The volume was illustrated by Alice R. Huger Smith (1876-1958), an American painter and printmaker. This edition features an introduction by Charles Joyner (1935-2016), distinguished professor emeritus of southern history and culture at Coastal Carolina University and author of several books, including Down by the Riverside: A South Carolina Slave Community.


Elizabeth Allston Pringle (1845–1921) was an American planter and author, who wrote under the pseudonym Patience Pennington. Her husband, John Julius Pringle, died in 1870. She is the author of Chronicles of Chicora Wood. In 1994 Pringle was posthumously inducted into the South Carolina Academy of Authors.

"This classic study of the Carolina Low Country as it passed through the purgatory of post-Civil War economic decline now appears in an edition that Charles Joyner's superb introduction makes accessible and appealing to the contemporary reader. It is a moving, sensitive, and highly colorful reading of Bessie Pringle's life and literary achievement."—Bertram Wyatt-Brown, University of Florida