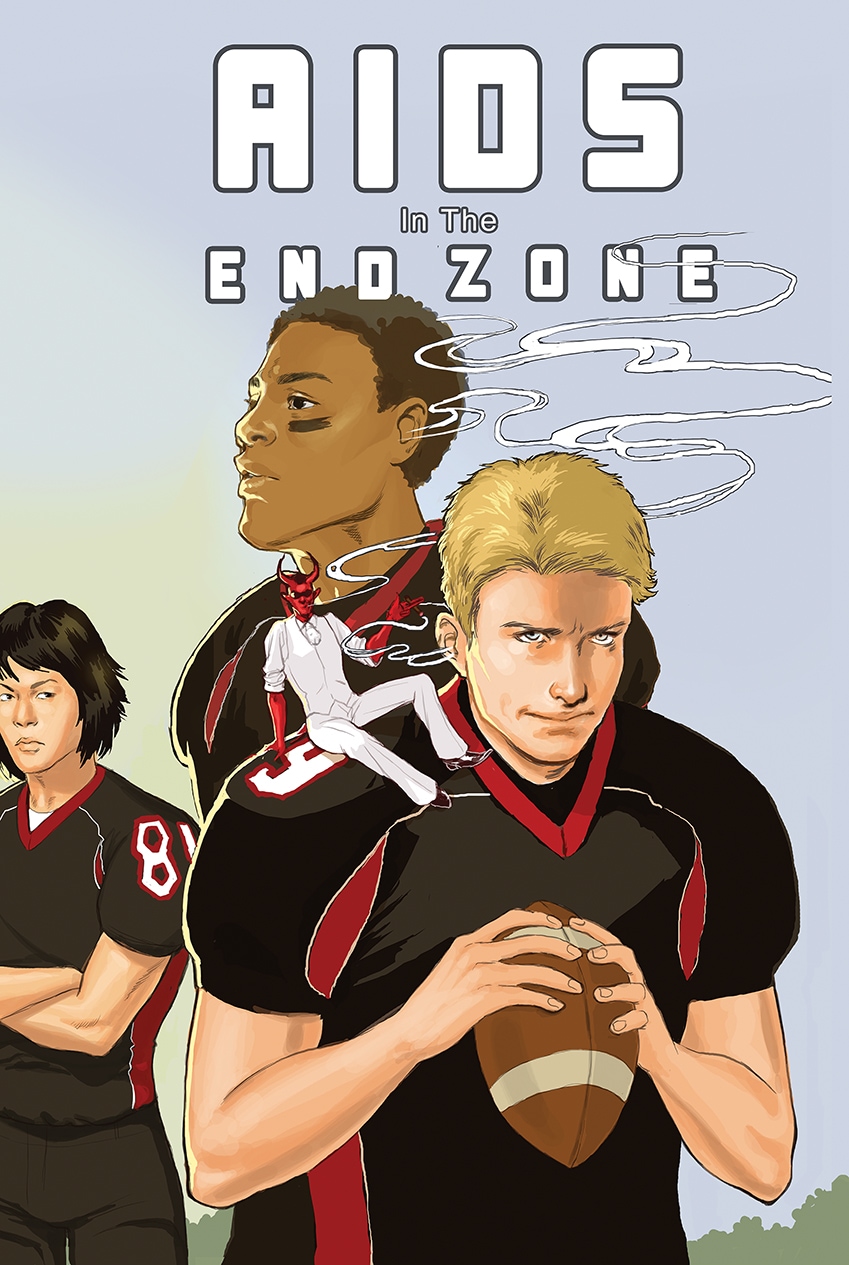 AIDS in the End Zone

Marcus Johnson has just been named star quarterback for the Marina High School Pirates. Former quarterback Brad Timmerman will do anything to depose this new rival and regain his position and popularity—including setting up Marcus with Maria Cruz, who is HIV positive. As secrets are exposed, this encounter will shake the halls of Marina High and change the lives of these students forever. AIDS in the End Zone approaches HIV/AIDS awareness and prevention through a compelling narrative with high school drama, the dangers of high-risk behaviors, and the benefits of public health resources. The graphic novella is the result of an innovative collaboration between editors Kendra S. Albright and Karen W. Gavigan, illustrator Sarah Petrulis, and the authors—students at the South Carolina Department of Juvenile Justice (SCDJJ).

Albright and Gavigan began this project in response to research indicating that the graphic novel format is a highly successful educational tool for motivating young adults to read. They chose HIV/AIDS as their topic because South Carolina ranks eighth in the nation for new HIV cases, while the capital city of Columbia ranks sixth nationally among metropolitan areas. By working with teen students at the SCDJJ, Albright and Gavigan were able to develop characters, a storyline, setting, and dialog as a collaborative project—engaging the students in the public health subject matter as well as in the creative process. This project was funded in part by a grant from the Association for Library and Information Science Education.


Kendra S. Albright is an associate professor in the School of Library and Information Science at the University of South Carolina. Her research has focused on the role of information and communication in the prevention of HIV/AIDS and domestic violence and the ways in which people feel about different kinds of messages across different cultures.

Karen W. Gavigan is an associate professor in the School of Library and Information Science at the University of South Carolina. Her research interests include the use of graphic novels in schools and libraries and the instructional role of the school librarian. With Mindy Tomasevich, Gavigan is co-author of Connecting Comics to Curriculum: Strategies for Grades 6–12 and the "Connecting Comics to Curriculum" column in Library Media Connection.

Sarah Petrulis studied illustrations and painting at the University of South Carolina and the School of Visual Arts in New York.

"The young men at the SCDJJ write about the dangers of drinking alcohol and having unprotected sex, [and] they explore universal themes of sex, power, and victimhood. The main characters engage in blackmail, bullying, treachery, and retribution. They face moral choices, personified by a devil on their shoulders—and they live with the life-altering consequences of their actions. This book allows teenagers to safely deal with the fallout from bad choices made by kids just like them."—A&U: America's AIDS Magazine

"Bottom line: Aids in the End Zone is not only of the most groundbreaking graphic novels for young adults, but also an educational and social justice gem for classroom teaching and beyond. The story has everything a parent, teacher, or librarian would want to discuss with young adult and teenage readers. High-quality and well-rounded main characters and an intriguing plot that will certainly raise eyebrows and motivate both educators and young readers alike to generate never-to-be-forgotten, life changing conversations. It's an educator's gold mine and a perfect fit for the Common Core Standards."—Katie Monnin, associate professor of literacy, University of North Florida, and author of Teaching Graphic Novels, Teaching Early Reader Comics and Graphic Novels, Using Content-Area Graphic Texts for Learning, Teaching Reading Comprehension with Graphic Texts

"AIDS in the End Zone is a gripping story that weaves together the frightening threat of HIV infection and the social pressures teens feel in high school. Marcus, Brad and the other characters are given life by the young writers at the South Carolina Department of Juvenile Justice and illustrator S.J. Petrulis. They speak and act with a remarkable authenticity that sucked my middle school sons and me into the story. The book became a springboard for a discussion about the story that persisted for several days after they read it. AIDS in the End Zone is a testament to the powers of good comics to compel readers to think and feel about important issues and the people affected by them. It is a remarkable piece of work that has the potential to profoundly impact the lives of other students. I hope that it is the first of many more to come."—Jay Hosler, professor of biology at Juniata College, award-winning author/illustrator of science-oriented comics, and author of the graphic novels Clan Apis, Evolution, The Sandwalk Adventures, and Optical Allusions

"As I am of a different generation and era, my approach to educating high schoolers about the hazards of casual sex and sexually-transmitted infections would be different from the approach used to develop this booklet. But my approach would surely reach few, if any, of today's young people. I am very impressed by the manner in which the editors have developed this booklet. The story line was composed by young men who have been in the thick of today's youth culture and shaped by the editors to have as much impact as possible. The illustrations are superb. I sincerely hope the results of this commendable effort will be the steering of many young people away from the quagmire of drugs, alcohol and casual sex that overwhelm so many in the current era."—Joseph F. Albright, immunologist, retired, National Institutes of Health