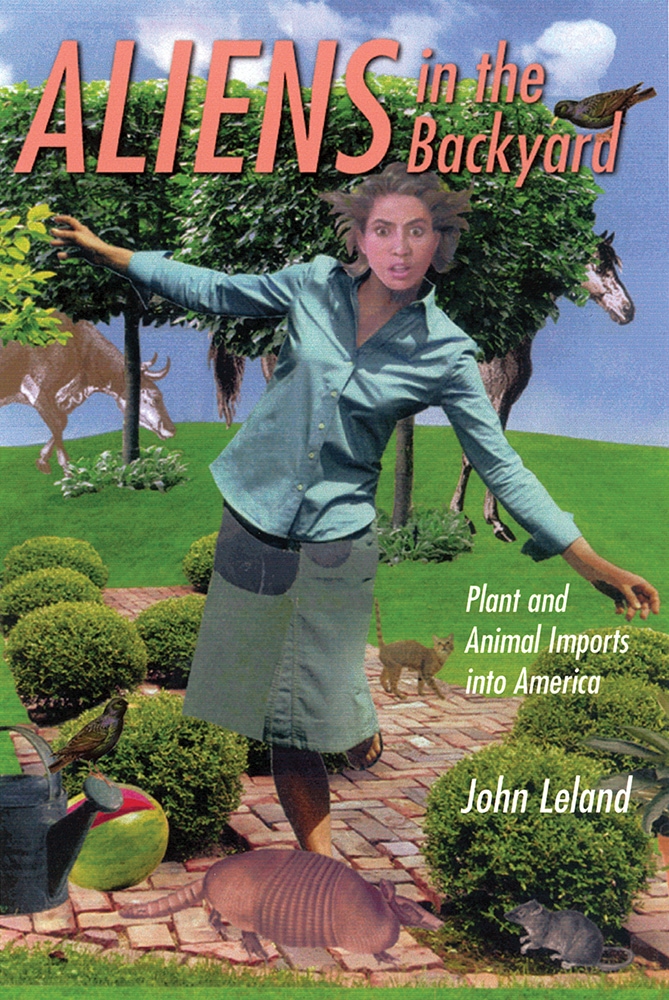 Aliens in the Backyard

Plant and Animal Imports into America

A fresh look at the origins of our iconic immigrant flora and fauna, revealed with wit and reverence for nature

Aliens live among us. Thousands of species of nonnative flora and fauna have taken up residence within U.S. borders. Our lawns sprout African grasses, our roadsides flower with European weeds, and our homes harbor Asian, European, and African pests. Misguided enthusiasts deliberately introduced carp, kudzu, and starlings. And the American cowboy spread such alien life forms as cows, horses, tumbleweed, and anthrax, supplanting and supplementing the often unexpected ways "Native" Americans influenced the environment. Aliens in the Backyard recounts the origins and impacts of these and other nonindigenous species on our environment and pays overdue tribute to the resolve of nature to survive in the face of challenge and change.

In considering the new home that imported species have made for themselves on the continent, John Leland departs from those environmentalists who universally decry the invasion of outsiders. Instead Leland finds that uncovering stories of alien arrivals and assimilation is a more intriguing—and ultimately more beneficial—endeavor. Mixing natural history with engaging anecdotes, Leland cuts through problematic myths coloring our grasp of the natural world and suggests that how these alien species have reshaped our landscape is now as much a part of our shared heritage as tales of our presidents and politics. Simultaneously he poses questions about which of our accepted icons are truly American (not apple pie or Kentucky bluegrass; not Idaho potatoes or Boston ivy). Leland's ode to survival reveals how plant and animal immigrants have made the country as much an environmental melting pot as its famed melding of human cultures, and he invites us to reconsider what it means to be American.


John Leland is the author of Learning the Valley: Excursions into the Shenandoah Valley and Porcher's Creek: Lives between the Tides, second-place winner in the 2003 Phillip D. Reed Memorial Award of the Southern Environmental Law Center. Leland is a professor of English at the Virginia Military Institute in Lexington.

"From the innocuous morning glory to the British-supplied deadly smallpox that purposely decimated Native American tribes, nearly every plant, animal, fish, bird, insect, and weed that is either taken for granted or cursed as a nuisance has an intriguing story to tell. . . . How such interlopers got here, and the ways in which both they and society have adapted to their presence, is provocatively and entertainingly revealed in Leland's engrossing look at the backstory behind the more notorious as well as the most mundane flora and fauna one can encounter."—Booklist

"Leland is a lively writer and has amassed a mountain of research, pulling in everything from the Thugs of India (in a discussion of jimsonweed) to Archy, Don Marquis's poetic cockroach. . . . The chapters on psychoactive plants and the environmental impact of Native Americans are particularly interesting."—Publishers Weekly

"Rich in detail and accessibly written, Leland's book will delight serious gardeners who may wonder about the origins of the plants they so carefully cultivate. Even the non-botanical reader can take pleasure in the unusual, unlikely, and downright strange ways in which so many plants and animals have been introduced to America."—Columbia (S.C.) State

"Aliens in the Backyard takes readers on a fine ramble through the fact and fiction, lore and legend of introduced species, covering everything from the boll weevil to the ailanthus tree, accidental and deliberate introductions, and species that came by themselves. Leland's account contains solid biological information but also odd facts and curious consequences that should have readers turning the pages and, once they finish, looking at the plants and animals around them with a new understanding."—Thomas R. Dunlap, author of Saving America's Wildlife: Ecology and the American Mind, 1850-1990