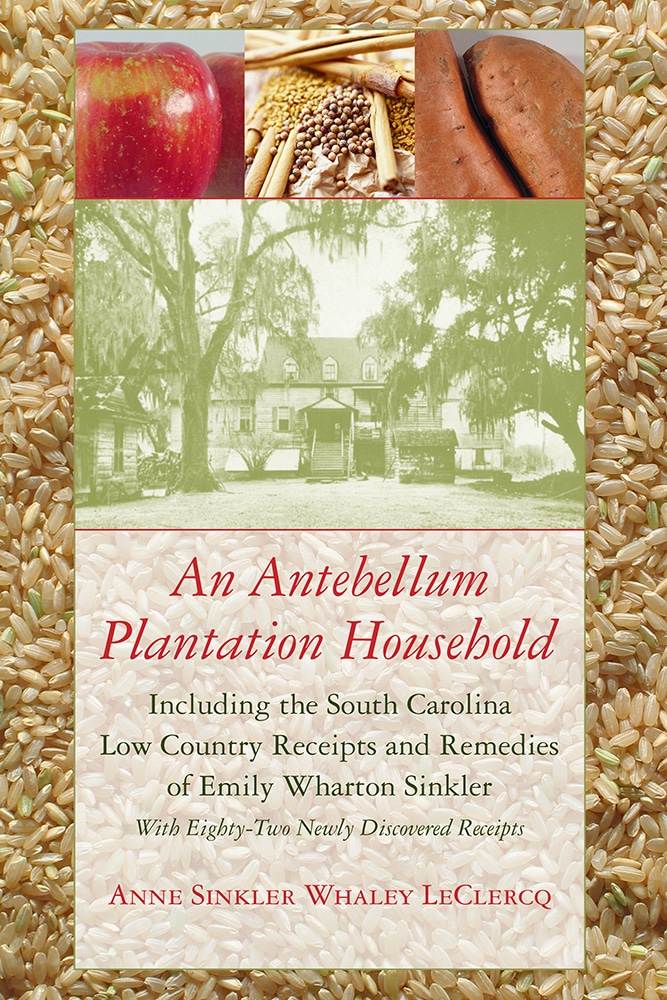 At the age of nineteen Emily Wharton married Charles Sinkler and moved eight hundred miles from her Philadelphia home to a cotton plantation in an isolated area in the South Carolina Lowcountry. In monthly letters to her northern family, she recorded keen observations about her adopted home, and in a receipt book she assembled a trusted collection of culinary and medicinal recipes reflecting her ties to both North and South. Together with an extensive biographical and historical introduction by Anne Sinkler Whaley LeClercq, these documents provide a flavorful record of plantation cooking, folk medicine, travel, and social life in the antebellum South.

The receipts offer valuable insight into the melding of diverse cultural and ethnic influences—French Huguenot, African, Lowcountry, Virginian, and Pennsylvanian—and reveal Sinkler's reliance on locally grown ingredients, success in devising substitutions for items that had been readily available in Philadelphia, and skill in treating a myriad of ailments.

"LeClercq's An Antebellum Plantation Household. . .provides a moving chronicle of a place, well-loved in its time, and passed into memory, legend, and now onto the printed page."—Southern Quarterly

"Using the letters and receipt books of an ancestor, Anne Sinkler Whaley LeClercq has vividly re-created life on a South Carolina lowcountry plantation during the two decades before the Civil War . . . . Through her letters, [Emily Sinkler] presents a vibrant and affluent plantation society but also voices her concerns about religion, politics, and slavery. In reconstructing the narrative of these letters, LeClercq offers us remarkable insight into the roles and responsibilities of women in antebellum society."—Georgia Historical Quarterly

"Here in the letters of Emily Wharton Sinkler is a window open on a woman's life in the South Carolina Lowcountry before the national trauma of the Civil War. To read these letters with their lively account of the daily life is to resurrect from the dead a world that pulsates with vitality and makes us breathe with rapturous appreciation the air of past times when our nation, North and South, was shaping its destiny."—Richard Marius, author of The Coming of Rain and Bound for the Promised Land

"Anne Sinkler Whaley LeClercq (1942–2014), a native of Charleston, was a great-great-great-granddaughter of Emily Wharton Sinkler. LeClercq was also the author of A Grand Tour of Gardens: Traveling in Beauty through Western Europe and the United States and the editor of Between North and South: The Letters of Emily Wharton Sinkler, 1842–1865 and Elizabeth Sinkler Coxe's Tales from the Grand Tour, 1890–1910."—