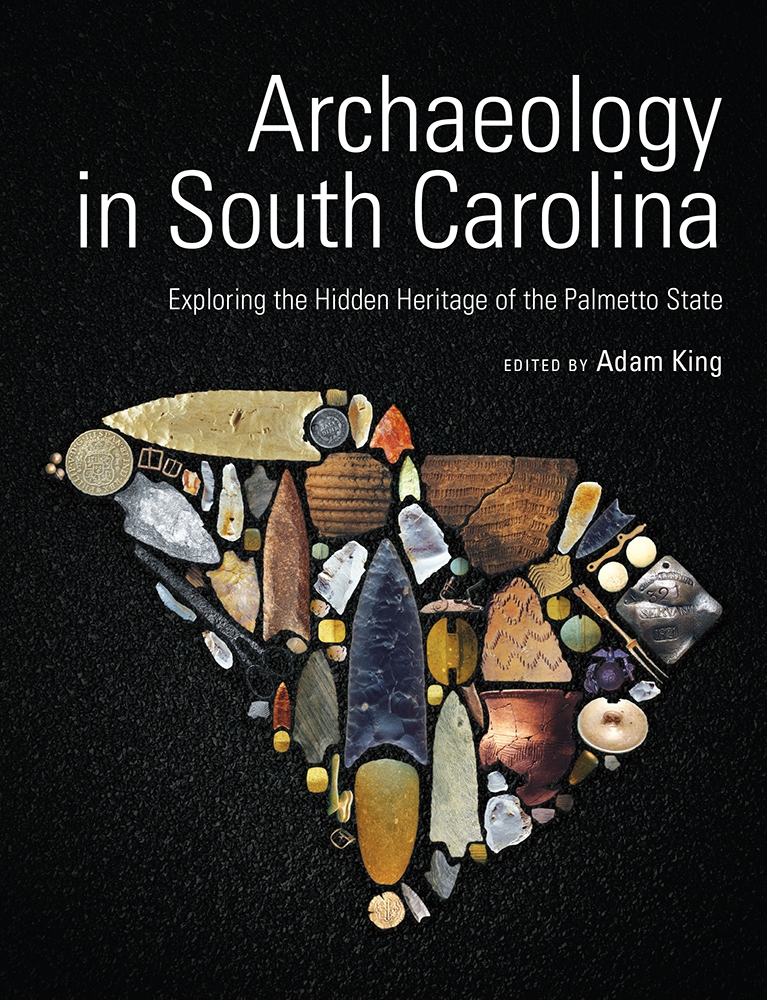 Exploring the Hidden Heritage of the Palmetto State

Adam King's Archaeology in South Carolina contains an overview of the fascinating archaeological research currently ongoing in the Palmetto state featuring essays by twenty scholars studying South Carolina's past through archaeological research. The scholarly contributions are enhanced by more than one hundred black and white and thirty-eight color images of some of the most important and interesting sites and artifacts found in the state.

South Carolina has an extraordinarily rich history encompassing the first human habitation of North America to the lives of people at the dawn of the modern era. King begins the anthology with the basic hows and whys of archeology and introduces readers to the current issues influencing the field of research. The contributors are all recognized experts from universities, state agencies, and private consulting firms, reflecting the diversity of people and institutions that engage in archaeology.

The volume begins with investigations of some of the earliest Paleo-Indian and Native American cultures that thrived in South Carolina, including work at the Topper Site along the Savannah River. Other essays explore the creation of early communities at the Stallings Island site, the emergence of large and complex Native American polities before the coming of Europeans,the impact of the coming of European settlers on Native American groups along the Savannah River, and the archaeology of the Yamassee, apeople whose history is tightly bound to the emerging European society.

The focus then shifts to Euro-Americans with an examination of a long-term project seeking to understand George Galphin's trading post established on the Savannah River in the eighteenth century. A discussion of Middleburg Plantation, one of the oldest plantation houses in the South Carolina lowcountry, is followed by a fascinating glimpse into how the city of Charleston and the lives of its inhabitants changed during the seventeenth and eighteenth centuries. Essays on underwater archaeological research cover several Civil War-era vessels located in Winyah Bay near Georgetown and Station Creek near Beaufort, as well as one of the most famous Civil War naval vessels—the H.L. Hunley.

The volume concludes with the recollections of a life spent in the field by South Carolina's preeminent historical archaeologist Stanley South, now retired from the South Carolina Institute of Archaeology and Anthropology at the University of South Carolina.


Adam King is a research associate professor in the South Carolina Institute of Archaeology and Anthropology and special projects archaeologist for the Savannah River Archaeological Research Program at the University of South Carolina. King has conducted research in the Southeast since 1987 and specializes in the Mississippian period and the political economies of chiefdoms. He is the author of Etowah: The Political History of a Chiefdom Capital.

"This book is a timely synthesis of South Carolina's rich cultural heritage. The authors present chapters that span the prehistoric and historic periods showcasing major technological and social changes through archaeological discoveries. The chapters highlight the most significant archaeological sites for each period, explain important research methods, and are full of artifact images and field photos showing archaeology in action. The volume is sure to appeal to other researchers and will equally intrigue non-archaeologists interested in South Carolina's past."—Ashley Smallwood, University of West Georgia

"This is highly diverse group of papers that emphasize the fascinating multicultural history of the Palmetto State, written by twenty prominent archaeologists, and culminating in a delightful history by Stan South, the undenied founder of American historical archaeology. This publication will be immensely informative to both the public and the archaeology community."—Mark Williams, director, Laboratory of Archaeology, University of Georgia

"At last, an engrossing book on the archaeology of South Carolina that can be read like a volume of short stories. You can read chronologically, or you can dip your toes into the topics that most interest you, from Indians to trading posts and plantations to early urban life and archaeology itself. Richly illustrated and rich in details, this is a spellbinding book!"—Gail E. Wagner, associate professor of anthropology, University of South Carolina

"An essential reference for all those interested in what archaeology can tell us about the occupation of South Carolina through the millennia, and about the scholars who shaped and continue to work with the remarkable record of human accomplishment that exists in the state. This volume provides an excellent synthesis of the kinds of archaeological research being undertaken, of value for the lay public and scholars alike."—David G. Anderson, University of Tennessee, co-author of Recent Developments in Southeastern Archaeology