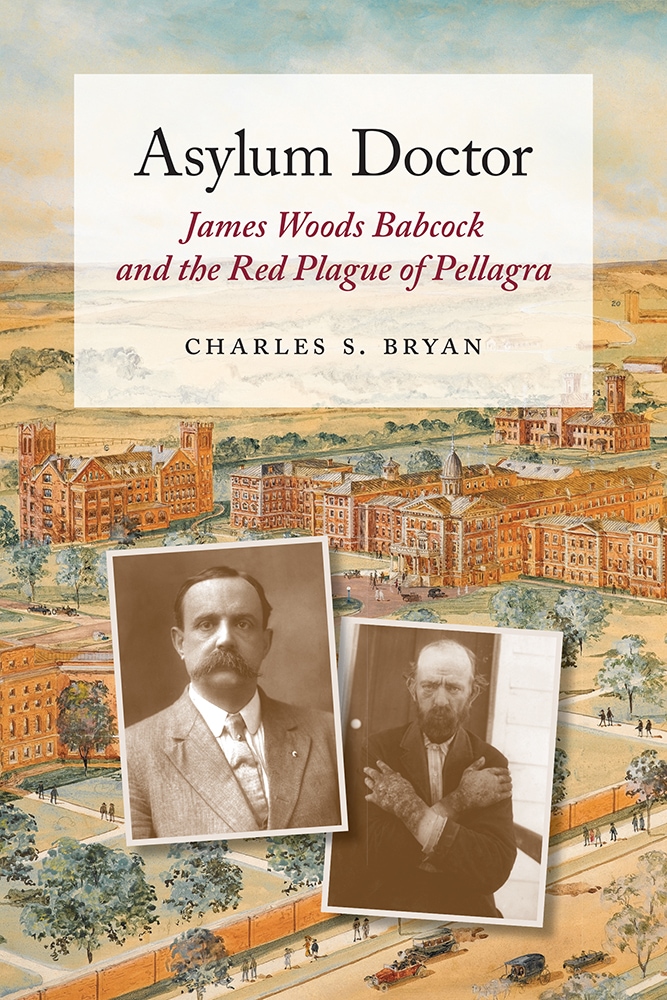 James Woods Babcock and the Red Plague of Pellagra

During the early twentieth century thousands of Americans died of pellagra before the cause—vitamin B3 deficiency—was identified. Credit for ending the scourge is usually given to Dr. Joseph Goldberger of the U.S. Public Health Service, who proved the case for dietary deficiency during 1914-1915 and spent the rest of his life combating those who refused to accept southern poverty as the root cause. Charles S. Bryan demonstrates that between 1907 and 1914 a patchwork coalition of American asylum superintendents, local health officials, and practicing physicians developed a competence in pellagra, sifted through hypotheses, and set the stage for Goldberger's epic campaign.

Leading the American response to pellagra was Dr. James Woods Babcock (1856-1922), superintendent of the South Carolina State Hospital for the Insane from 1891 to 1914. It was largely Babcock who sounded the alarm, brought out the first English-language treatise on pellagra, and organized the National Association for the Study of Pellagra, the three meetings of which—all at the woefully underfunded Columbia asylum—were landmarks in the history of the disease. More than anyone else, Babcock encouraged pellagra researchers on both sides of the Atlantic. Bryan proposes that the early response to pellagra constitutes an underappreciated chapter in the coming-of-age of American medical science.

The book also includes a history of mental health administration in South Carolina during the early twentieth century and reveals the complicated, troubled governance of the asylum. Bryan concludes that the traditional bane of good administration in South Carolina and excessive General Assembly oversight, coupled with Governor Cole Blease's political intimidation and unblushing racism, damaged the asylum and drove Babcock from his post as superintendent. Remarkably many of the issues of inadequate funding, political cronyism, and meddling in the state's health care facilities reemerged in modern times.

Asylum Doctor describes the plight of the mentally ill during an era when public asylums had devolved into convenient places to warehouse inconvenient people. It is the story of an idealistic humanitarian who faced conditions most people would find intolerable. And it is important social history for, as this book's epigraph puts it, "in many ways the Old South died with the passing of pellagra."

Charles S. Bryan is the Heyward Gibbes Distinguished Professor of Internal Medicine Emeritus at the University of South Carolina. His extensive publications deal mainly with infectious diseases, medical history, and medical biography. He is a Master of the American College of Physicians and a recipient of the Order of the Palmetto.

"Charles Bryan, physician and accomplished historian of medicine, has written an informative and stimulating book. Weaving together biography and a detective story with an unusual perspective on the Tillman-Blease era of South Carolina history, Asylum Doctor merits the attention of everyone interested in the development of modern medicine as well as in the history of the Palmetto State."—William J. Cooper, Jr., Louisiana State University, author of Jefferson Davis: American and We Have the War Upon Us: The Onset of the Civil War, November 1860–April 1861

"The extensively researched and documented book is extremely well written and will be of great value for many readers."—Choice

"Bryan's story of James Babcock, the state mental institution, and the battle against pellagra is not only an outline of an important era in South Carolina history, but also a testament to the medical knowledge, scholarship and commitment of the author."—Charlie Nutt, The Free Times

"Years before the U.S. Public Health Service assigned Joseph Goldberger to discover the cause and cure of pellagra in 1914, James Woods Babcock, superintendent of the South Carolina State Hospital for the Insane was a pioneer in pellagra studies. In this compelling biography, Charles Bryan offers the previously untold story of how Babcock initially sounded the alarm about pellagra in the United States and used his considerable organizational skills to gather those needing to know more about the dread disease that some called the scourge of the South."—Alan M. Kraut, University professor of History, American University, author of Goldberger's War, the Life and Work of a Public Health Crusader

"Asylum Doctor is a three-course feast—a biography, an asylum history set in the Deep South, and a story of the American encounter with pellagra—served by an author who blends high degrees of medical expertise and historical skill. A gourmet offering in the history of medicine."—Michael Bliss, University of Toronto, author of The Discovery of Insulin and William Osler: A Life in Medicine

"An extremely well-done biography of an important but neglected figure in the history of the care of the mentally ill in the United States . . ."—Gerald Grob, Rutgers University, author of Mental Health and American Society, 1875-1940 and The Mad Among Us: A History of the Care of America's Mentally Ill

"A thoroughly researched and engagingly written study and a significant contribution to our understanding of the history of mental health care in the South. The chapters dealing with Babcock's important role in the search to understand pellagra are especially notable. After reading them, I felt that I understood the epidemiological history of this terrible nutritional disease for the first time. They also provide an object lesson in how science is sometimes sidetracked by the force of personal, social, and cultural influences.——"—Peter McCandless, College of Charleston, author of Moonlight, Magnolias, and Madness: Insanity in South Carolina from the Colonial Period to the Progressive Era and Slavery, Disease, and Suffering in the Southern Lowcountry

"A beautifully written, erudite, deeply human story of a flawed hero. Bryan presents Babcock as modest, talented, goodhearted, and dedicated to medicine but ill-equipped to deal with the politics of running an asylum, and overly reticent about his role in the evolving history of pellagra. The reader is quickly absorbed in fights about money, medical science, asylum management, and the fates of the various participants involved. A tour de force."—Rosemary A. Stevens, author of American Medicine and the Public Interest and In Sickness and in Wealth: American Hospitals in the Twentieth Century