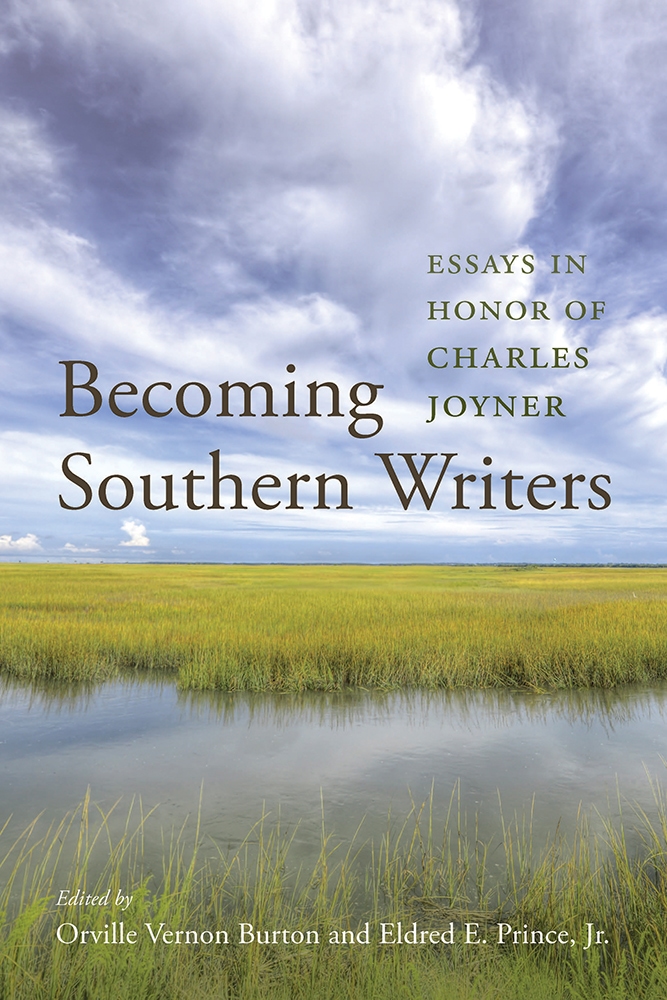 Essays in Honor of Charles Joyner

Southern writers, historians, and artists celebrate the life and career of a beloved mentor, friend, and colleague

Edited by southern historians Orville Vernon Burton and Eldred E. Prince, Jr., Becoming Southern Writers pays tribute to South Carolinian Charles Joyner's fifty year career as a southern historian, folklorist, and social activist. Exceptional writers of fact, fiction, and poetry, the contributors to the volume are among Joyner's many friends, admirers, and colleagues as well as those to whom Joyner has served as a mentor. The contributors describe how they came to write about the South and how they came to write about it in the way they do while reflecting on the humanistic tradition of scholarship as lived experience.

The contributors constitute a Who's Who of southern writers—from award-winning literary artists to historians. Freed from constraints of their disciplines by Joyner's example, they enthusiastically describe family reunions, involvement in the civil rights movement, research projects, and mentors. While not all contributors are native to the South or the United States and a few write about the South only occasionally, all the essayists root their work in southern history, and all have made distinguished contributions to southern writing. Diverse in theme and style, these writings represent each author's personal reflections on experiences living in and writing about the South while touching on topics that surfaced in Joyner's own works, such as race, family, culture, and place. Whether based on personal or historical events, each one speaks to Joyner's theme that "all history is local history, somewhere."


Orville Vernon Burton is Creativity Professor of Humanities and professor of history, sociology, and computer science at Clemson University and the director of the Clemson CyberInstitute. From 2008 to 2010, he was the Burroughs Distinguished Professor of Southern History and Culture at Coastal Carolina University. He is Emeritus University Distinguished Teacher/Scholar, University Scholar, and professor of history, African American studies, and sociology at the University of Illinois. The author of more than two hundred articles and author or editor of more than twenty books, including The Age of Lincoln and In My Father's House Are Many Mansions: Family and Community in Edgefield, South Carolina, Burton's latest book is Penn Center: A History Preserved.

Eldred E. "Wink" Prince, Jr., a native of Loris, South Carolina, is a professor of American history and director of the Waccamaw Center for Cultural and Historical Studies at Coastal Carolina University. His research interest is Southern economic history, and his publications include Long Green: The Rise and Fall of Tobacco in South Carolina and The Great Harvest: Remembering Tobacco in the Pee Dee. Prince and his wife, Sallye, reside in Conway and Surfside, South Carolina.

"We need more volumes like this one. Reading it leaves one feeling grateful for the life choices these writers and scholars made, and hopeful for the future of our academic profession."—The Journal of Southern History

"What a treasure trove! It's not enough that Charles Joyner has made his own significant contribution to Southern history and literature; here a collection of renowned writers honoring him as their friend, and in many cases mentor, adds to his legacy through essays and mini-histories sure to grab any reader with even a touch of southern blood or experience. Josephine Humphrey's musing that the South is a little like her mother, 'full of secrets I would never know and truths I would not hear in full,' sums up what so many of us children of Dixie feel. Many of those secrets and truths can be found in these pages."—Cokie Roberts, journalist and author of Capital Dames: The Civil War and the Women of Washington

"This array of essays and artistic creations by historians, folklorists, poets, writers all, is a special constellation in the Southern sky, all shining and especially singing to the brightest star among them—Charles Joyner. It is as if someone held a huge lowcountry fish fry and picnic full of storytelling, inspiring and tragic ideas, poetry, music, psalm-readings, laughs, and tears. And everybody learned something new, felt something special, and said 'Amen.' Joyner deserves this intellectual and affectionate tribute for his unparalleled scholarship and imagination in telling us about the South, our cultures, our nation and ourselves."—David W. Blight, Yale University, author of Race and Reunion: The Civil War in American Memory

"Charles Joyner has long been an exemplary southern man of letters and these fascinating accounts of how some two dozen writers became southern writers do him great, and deserved, honor."—Shane White, author of Prince of Darkness: The Untold Story of Jeremiah G. Hamilton, Wall Street's First Black Millionaire