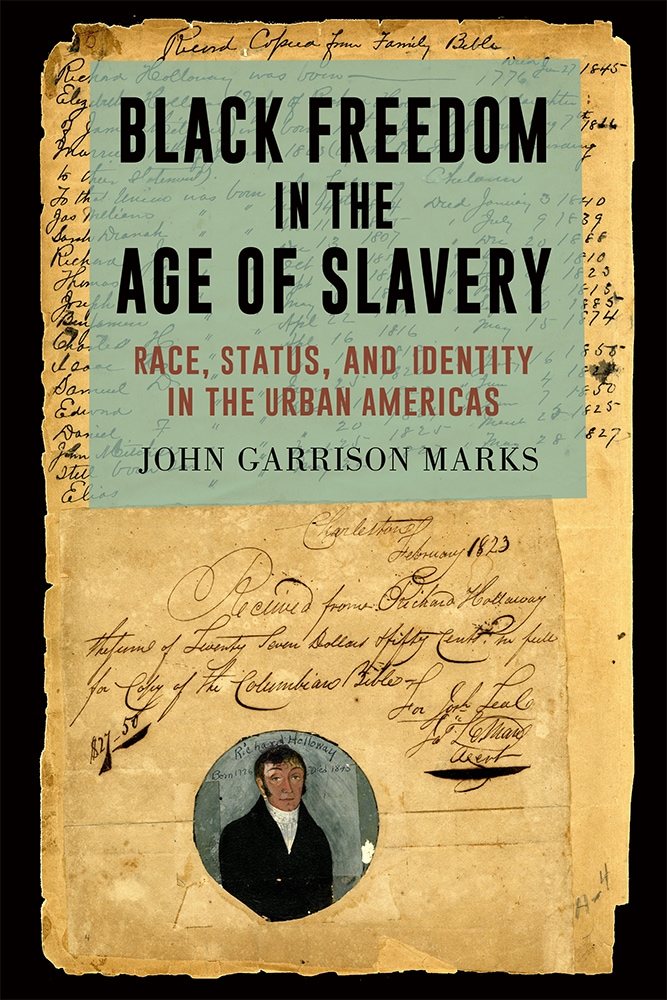 Black Freedom in the Age of Slavery

Race, Status, and Identity in the Urban Americas

Prior to the abolition of slavery, thousands of African-descended people in the Americas lived in freedom. Their efforts to navigate daily life and negotiate the boundaries of racial difference challenged the foundations of white authority—and linked the Americas together.

In Black Freedom in the Age of Slavery John Garrison Marks examines how these individuals built lives in freedom for themselves and their families in two of the Atlantic World's most important urban centers: Cartagena, along the Caribbean coast of modern-day Colombia, and Charleston, in the lowcountry of North America's Atlantic coast. Marks reveals how skills, knowledge, reputation, and personal relationships helped free people of color improve their fortunes and achieve social distinction in ways that undermined whites' claims to racial superiority.

Built upon research conducted on three continents, this book takes a comparative approach to understanding the contours of black freedom in the Americas. It reveals in new detail the creative and persistent attempts of free black people to improve their lives and that of their families. It examines how various paths to freedom, responses to the Haitian Revolution, opportunities to engage in skilled labor, involvement with social institutions, and the role of the church all helped shape the lived experience of free people of color in the Atlantic World.

As free people of color worked to improve their individual circumstances, staking claims to rights, privileges, and distinctions not typically afforded to those of African descent, they engaged with white elites and state authorities in ways that challenged prevailing racial attitudes. While whites across the Americas shared common doubts about the ability of African-descended people to survive in freedom or contribute meaningfully to society, free black people in Cartagena, Charleston, and beyond conducted themselves in ways that exposed cracks in the foundations of American racial hierarchies. Their actions represented early contributions to the long fight for recognition, civil rights, and racial justice that continues today.

John Garrison Marks works for the American Association for State and Local History and holds a Ph.D. in history from Rice University. He is the coeditor of Race and Nation in the Age of Emancipations: An Atlantic World Anthology and his work has appeared in Southwestern Historical Quarterly and Atlantic Studies.

"An important contribution to the history of black freedom, this comparative study of free people of color in Charleston and Cartagena is equally attentive to the broader Atlantic and to local economic, social, demographic, and institutional circumstances. The result is a rich, textured, and locally grounded reconstruction of people of African descent's relentless pursuit for standing, respectability, family and community in the Americas."—Alejandro de la Fuente, Harvard University

"In Black Freedom in the Age of Slavery John Marks has produced a carefully researched and innovative study of how enslaved people in the Atlantic slave ports of Cartagena and Charleston achieved freedom and sought respectability under very different social, economic, and political systems. The key he argues, was the access to public institutions free people of color enjoyed in the Spanish city, and the commitment Charlestonians made to preserve slavery in perpetuity. Based on deep archival research in Colombia, Spain, and the United States, this is a welcome contribution to the study of slavery, racism, and emancipation."—Jane Landers, Vanderbilt University

"Black Freedom in the Age of Slavery makes a crucial contribution to the history of the Atlantic world. By linking the lives of free blacks in Charleston, South Carolina, and Cartagena, Colombia, Marks's work bridges the sites of Atlantic slavery, treating disparate geographies as fundamentally linked and raising broad and important questions about the nature of black freedom. Marks's deeply researched and beautifully written study is an important work that will impact the fields of Latin American history, North American history, the histories of slavery and freedom, and beyond."—Jennifer L. Morgan, New York University