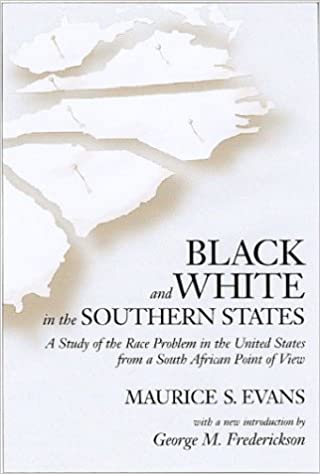 Black and White in the Southern States

Reprinted here for the first time since its publication in 1915, Black and White in the Southern States by Maurice S. Evans, a British immigrant to South Africa in 1875 and a founder of the Union of South Africa in 1910, is one of the earliest studies in comparative race relations and the first to connect the experience of the American South experience to that of South Africa. Evans, a perceptive observer and a surprising critic of American race relations, was an objective chronicler of the South during the segregation era. This work is a synthesis of the observations Evans made as he traveled the southern United States in 1914 to examine race relations. During this trip he investigated southern metropolitan life, industrial relations and the workplace, and social and cultural connections. Evans's study presents a revealing assessment of racial attitudes and ideologies in the Jim Crow era. In his introduction to this edition George M. Fredrickson, the preeminent scholar who defined the field of comparative racial ideologies, analyzes the underlying racist character of Evans's work. Fredrickson places Evans's work in its full intellectual social context.

Evans's overarching question was whether or not black and white races could share the same geographical region and, if they could, under what conditions. He learned quickly that, for the South, this was a moot question. Historical circumstances prevented a geographical separation, even though some black and white southerners vainly advocated that course. The history of the American South served as an object lesson for South Africa—a revelation of the consequences of incomplete racial segregation. Evans explains how white southerners, unable to separate the races physically, created legal and cultural bars to segregate the races. Concluding that the South was a poor model for "solving" race questions, Evans suggested that South Africa might solve its problem by maintaining strict territorial division, thereby avoiding the discriminatory, punitive Jim Crow culture of the American South.


An immigrant to the British East African colony of Natal in 1875, Maurice S. Evans (1854–1920) was a politician who emerged as a leading white expert on "native affairs." He authored The Native Problem in Natal and Black and White in South East Africa. Evans's research trip to the United States in 1914 laid the foundation for and gave direction to his assessments of black and white relations.

George M. Fredrickson is Edgar E. Robinson Professor of United States History at Stanford University in California. He is the author of The Inner Civil War, The Black Image in the White Mind, White Supremacy: A Comparative Study in American and South African History, and Black Liberation: A Comparative History of Black Ideologies in the United States and South Africa, as well as two collections of essays: The Arrogance of Race and The Comparative Imagination. Fredrickson's books have received several prizes, including the Ralph Waldo Emerson Prize from Phi Beta Kappa and a Pulitzer Prize jury nomination. He is past president of the Organization of American Historians and a member of the American Academy of Arts and Sciences.