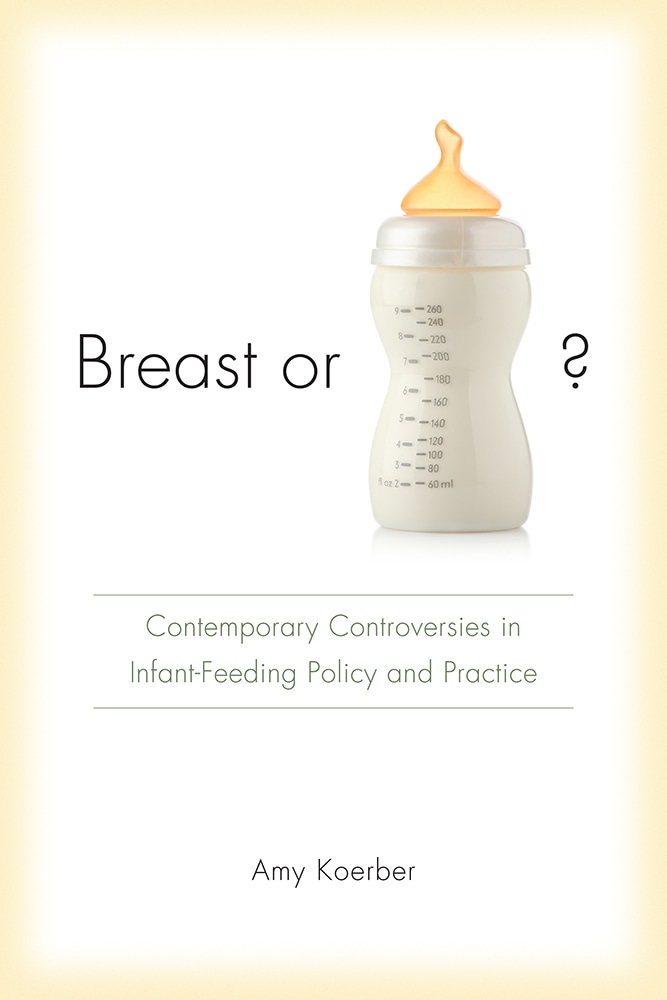 Breast or Bottle? is the first scholarly examination of the shift in breastfeeding recommendations occurring over the last half century. Through a close analysis of scientific and medical controversies and a critical examination of the ways in which medical beliefs are communicated to the public, Amy Koerber exposes layers of shifting arguments and meaning that inform contemporary infant-feeding advocacy and policy.

Whereas the phrase "breast or bottle" might once have implied a choice between two relative equals, human milk is now believed to possess unique health-promoting qualities. Although it is tempting to view this revision in medical thinking as solely the result of scientific progress, Koerber argues that a progress-based interpretation is incomplete. Epidemiologic evidence demonstrating the health benefits of human milk has grown in recent years, but the story of why these forms of evidence have dramatically increased in recent decades, Koerber reveals, is a tale of the dedicated individuals, coalitions, and organizations engaged in relentless rhetorical efforts to improve our scientific explanations and cultural appreciation of human milk, lactation, and breastfeeding in the context of a historical tendency to devalue these distinctly female aspects of the human body. Koerber demonstrates that the rhetoric used to promote breastfeeding at a given time and cultural moment not only reflects a preexisting reality but also shapes the infant-feeding experience for new mothers.

Koerber's claims are grounded in extensive rhetorical research including textual analysis, archival research, and interviews with key stakeholders in the breastfeeding controversy. Her approach offers a vital counterpoint to other feminist analyses of the shift toward probreastfeeding scientific discourse and presents a revealing rhetorical case study in the complex relationship between scientific data and its impact on medical policy and practices. The resulting interdisciplinary study will be of keen interest to scholars and students of rhetoric, communication, women's studies, medical humanities, and public health as well as medical practitioners and policymakers.

"Breast or Bottle? is a kairology of breastfeeding, an analysis of the rhetorical activity that has made possible conflicting public sentiments—for example, that breastfeeding is best but that ingredients in human milk can be replicated in formulas. In explicating infant feeding controversies through an analysis of biomedical, professional, marketing, and personal rhetoric, Amy Koerber opens up a 'feminist discursive space' for breastfeeding."—Bernice Hausman, professor of English at Virginia Tech and author of Mother's Milk: Breastfeeding Controversies in American Culture, and Viral Mothers: Breastfeeding in the Age of HIV/AIDS

"Koerber's nuanced rhetorical history of infant feeding is utterly illuminating. Arguing that today's pro-breastfeeding messages must be viewed in relation to the anti-breastfeeding campaigns to which they respond, Koerber elegantly demonstrates what a rhetorical scholar brings to interdisciplinary studies of health and culture. Here is an exemplary, multimodal, analysis of how matters of health, medicine, and choice are negotiated in public discourse."—Judy Z. Segal, professor of English at the University of British Columbia and author of Health and the Rhetoric of Medicine

"Amy Koerber's thoughtful analysis of the rhetorical contest over breastfeeding reveals the deeply interpenetrating, often contradictory forces that shape breastfeeding policy, perception, and practice. This clearly written, compelling text strongly contributes to our understanding of agency and resistance in health contexts and will prove useful for scholars and practitioners alike."—Lisa Keränen, author of Scientific Characters: Rhetoric, Politics, and Trust in Breast Cancer Research