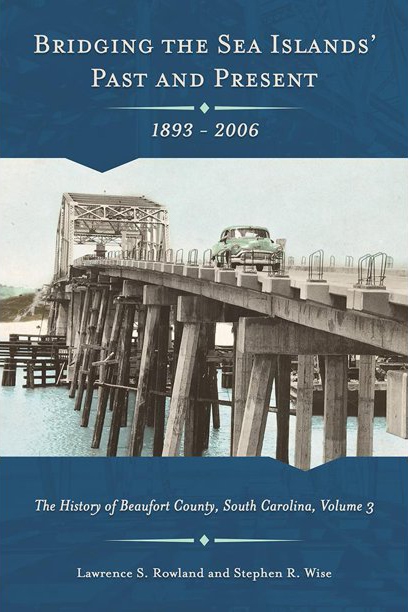 This third volume of the history of Beaufort County by Lawrence S. Rowland and Stephen R. Wise encompasses the remaining 113 years of the 500-year chronicle of the legendary South Carolina Sea Islands. Bridging the Sea Islands' Past and Present, 1893-2006 begins with the devastating Sea Island Hurricane of 1893, one of the worst natural disasters in American history. The storm was followed by a hurricane of violence, political and social revolution, economic chaos, and ideological turmoil that battered twentieth-century Beaufort and the world. Paradoxically the twentieth century was also an epoch of nearly unbroken scientific and medical progress, technological innovation, cultural experimentation, and the expansion of democratic institutions throughout the world. Modern Beaufort County has been a testing ground for the reunion of North and South in the aftermaths of the Civil War, Great Depression, and defeated Jim Crow laws.

The great exodus of African Americans away from Beaufort County and the post-World War II sunbelt immigration transformed Beaufort County from a majority black population in 1900 to a majority white population in 1960. Perhaps the county's most representative immigrant experience has been that of retirees and resort-home owners, a phenomenon that began in the late nineteenth century as wealthy northerners—financiers, industrialists, and industrial farmers—began purchasing former plantations and transformed them into private hunting preserves.

The new Beaufortonians revolutionized lowcountry life and culture as they brought new forms of economic enterprise, social and cultural values, and worldviews different from those that had shaped Beaufort County for centuries. Monumental political events are fully addressed from an insider's point of view, but, amid all the frontiers, storms, and demographic revolutions, Rowland and Wise have also provided a business history of the American South. Enterprise and entrepreneurship, whether successful or failed, link together all the themes and unite all the actors found in this work.

Here readers meet Robert Smalls, Thomas E. Miller, George Waterhouse, Niels Christensen, Thomas Talbird, Tillie O'Dell, Isabella Glen, William Keyserling, Kate Gleason, Harriet Keyserling, Charles Fraser, and Bobby Ginn—active agents of change in politics, business, and culture. Indeed Rowland and Wise have not only chronicled the lives and times of these people but have also been active participants in the stories they tell. Rowland is a Beaufort native with centuries-old lowcountry lineage. Wise, an Ohio transplant, is a scholar of the Civil War and the local history of his adopted home.

"This third volume of the history of Beaufort County, South Carolina, completes a decades-old project that rivals in detail those wonderful 19th century English county histories. Revolution, change, and turmoil have shaped and continue to shape what many take for a sleepy coastal community. In this skillfully woven narrative, the authors reveal a complex story of a people and a place that successively and successfully have accepted and adapted to change."—Walter Edgar

"It is a reading experience that will delight anyone who appreciates a story well told."—The Journal of Southern History

"The book is an intriguing and nuanced history of Beaufort County. The authors weave the economic, political, educational, and social history into a fascinating story of the Lowcountry that transports the reader to experience the events and the people. It clearly communicates the place Beaufort County plays in the history of South Carolina."—Jane T. Upshaw, chancellor, University of South Carolina Beaufort

"This volume is a model of local history. It strikes just the right balance between the broad and the detailed, the thematic and the topical and, because this is Beaufort, the timeless and the timely. Those who think they know the Beaufort story will find in these pages both a skillful retelling and also a wealth of new information. Those new to the story will be mightily impressed by the authors' command of the subject and the way in which the story told here limns a focused version of most of the ventral themes of Southern history."—John McCardell, president emeritus of Middlebury College

"This volume is unique to a particular county in South Carolina, but similar events were happening in other barrier islands from North Carolina to Florida. This may be the tale of Beaufort County, but its history has a much wider perspective... Recommended. All levels/libraries, especially along the Atlantic seaboard."—Choice