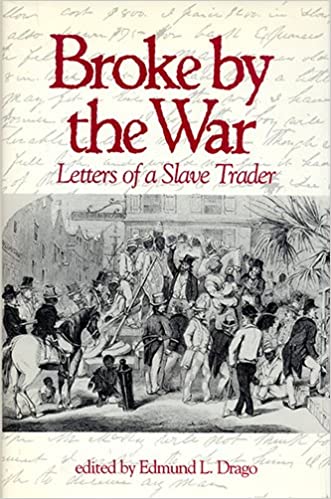 Broke by the War

Letters of a Slave Trader

Broke by the War is a collection of more than 140 letters written between 1852 and 1857 by South Carolina slave trader A. J. McElveen to his employer Z. B. Oakes, a prosperous Charleston broker. The correspondence provides an intimate look into the world of slave trading, from the economic aspects of prices, shipping, supply sources, and financing to the impact on those involved, including the breakup of slave families, the pursuit of runaways, and the various roles played by doctors, lawyers, bankers, and planters in this abominable business.

Edited and introduced by Edmund L. Drago, McElveen's letters give the modern reader an opportunity to view Old South slave trading through the eyes of a representative participant. As Drago recounts, the Civil War decimated McElveen's finances and left him, as described years later by a credit investigator, simply as "broke by the war—old man."

Edmund L. Drago is a professor of history at the College of Charleston. He is the author of Confederate Phoenix: Rebel Children and Their Families in South Carolina and Black Politicians and Reconstruction in Georgia: A Splendid Failure.

"Broke by the War provides a numbing glimpse into the world of slave trading in the Old South of the 1850s. The book is a useful teaching tool and the source of important information on the slave trade in the twilight of the antebellum South."—Journal of American History

"Drago has done an excellent job editing these letters and has written a lucid introduction. He provides background information on the letters, the two traders, the Charleston market, and the South Carolina countryside where McElveen conducted his business. . . . One is struck by McElveen's impersonal approach toward the buying and selling of slaves. The statements and questions raised in his letters are exactly those one might expect of any entrepreneur seeking to buy low and sell high."—Journal of Economic History

"A fascinating collection of letters. . . . Admirably edited, Drago's volume sheds much light on the trials and tribulations of an Old South would-be, the insidious world in which he operated, and the victims of his business activities. This is a must-read for anyone interested in the history of slavery or slave trading in the antebellum South."—Journal of Southern History