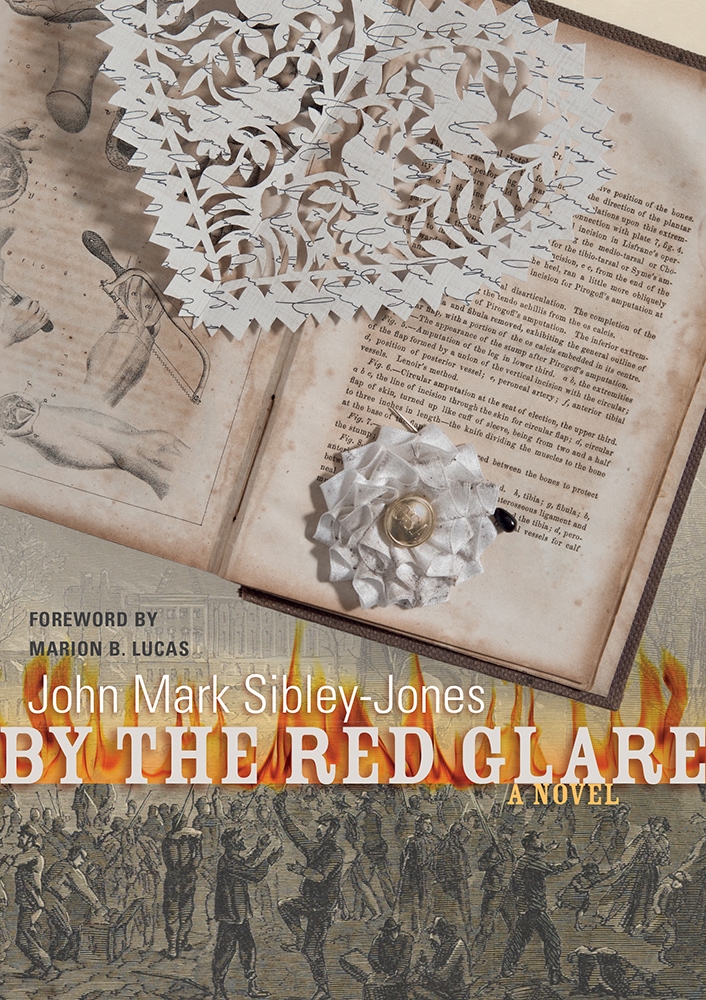 By the Red Glare

Fear and brutality grip Columbia, South Carolina, in the harsh winter of 1865 as General William Tecumseh Sherman continues his fiery march to the sea and advances on the capital city where secession began. John Mark Sibley-Jones's By the Red Glare takes us into the lives of representative citizens—black and white, men and women, Confederates and Unionists, civilians and combatants, freed and shackled, sane and insane—on the eve of historic destruction.

The Columbia hospital is overcrowded with wounded soldiers from both sides. As word of Sherman's advance spreads, old animosities threaten an outbreak of violence in this place of healing. Less than two miles from the hospital stands the Lunatic Asylum, whose yard is occupied by more than twelve hundred federal prisoners guarded by old men and boys too young to join the Confederate army. The most violent madman in the asylum hatches an escape plan that requires the aid of prisoners who, knowing they cannot trust him, nevertheless will risk their lives to gain freedom. In the heart of the city, Confederate leaders gather around a table in the home of General James Chesnut to study a tattered map and plan a battle strategy, only to stare at one another in disbelief as the first sound of cannon fire announces the imminent arrival of Sherman's troops.

Sibley-Jones's riveting story of the collapse of the Confederacy includes a cast of memorable characters: General Wade Hampton, stoic but fierce in his rage; Mary Boykin Chesnut, brilliant but suffering from bipolar disorder, who records the events of the war with eerie devotion; Louisa Cheves McCord, who maintains that slavery is God's will and who promises to do all in her power to abet the war that took the life of her only son; a slave who vows to kill the man who beat him mercilessly at the whipping post in the town center; two sworn-enemy soldiers who must assist each other in their jaunts to the brothel district at the city's edge; and Joseph Crawford, the hospital steward troubled by his own shifting allegiances as he wonders whether these are the end of days.

Rife with literary and historical merits, By the Red Glare is published on the eve of the sesquicentennial of the burning of Columbia, as monumental an episode in Civil War history as any other in the lore-soaked South. The novel includes a foreword by historian Marion B. Lucas, author of Sherman and the Burning of Columbia.


John Mark Sibley-Jones teaches English at the South Carolina Governor's School for the Arts and Humanities in Greenville. Prior to moving to Greenville, he taught English literature for fifteen years at the University of South Carolina, where he won several teaching awards, including the Michael A. Hill Outstanding Honors Faculty Award. Sibley-Jones has published more than fifty academic and professional articles and two short stories. He has been a finalist in several national fiction competitions. This is his first novel.

"By the Red Glare establishes Mark Sibley-Jones as a fine new voice in southern fiction. With great skill and ample ambition, he gives us a deeply felt human story of love, labor, and liberty set against a moment of horrid and grandiose destruction, the origins and implications of which are contested in history and lore to this day—the burning of Columbia, South Carolina. Sibley-Jones's characters, both historical and invented, loom up as great symbols of the cruelty and courage inherent in the Civil War-torn South, but the truths we glean from their riveting story resonate still today, passing the test of historical fiction with high honors."—Pat Conroy

"Refreshingly, John Mark Sibley-Jones' novel is commendably devoid of the usual cliches, holds romanticized notions of the Civil War and antebellum life to scrutiny and invests its story with depth and richly drawn lead characters. . . . 'By the Red Glare' should appeal to a discerning reader of Civil War-era fiction and history, those drawn to anti-war fiction, and someone who expects more from a novel than stock characterizations and moonlight-and-magnolias mythos."—Charleston Post & Courier

"By the Red Glare does what only the best historical novels can do: it enables readers to feel more like participants than observers. Sibley-Jones has written a Civil War novel that deserves a wide and appreciative audience."—Ron Rash, author of Above the Waterfall

"Against a backdrop of widespread fear and sectional animosity, John Mark Sibley-Jones captures the dramatic world of Columbia on the cusp of its historic burning in this craftily written and thoroughly researched novel. In a seamless blending of art and history, Sibley-Jones combines a handful of Columbia's famous residents during the closing days of the Civil War with living, breathing imaginary characters who carry his complex and compelling narrative."—Marion B. Lucas, from the foreword

"Gritty, real, and at times horrifying, By the Red Glare is a must read for Civil War enthusiasts. Sherman may have burned down Columbia, but Sibley-Jones has resurrected the city in vivid detail."—George Singleton