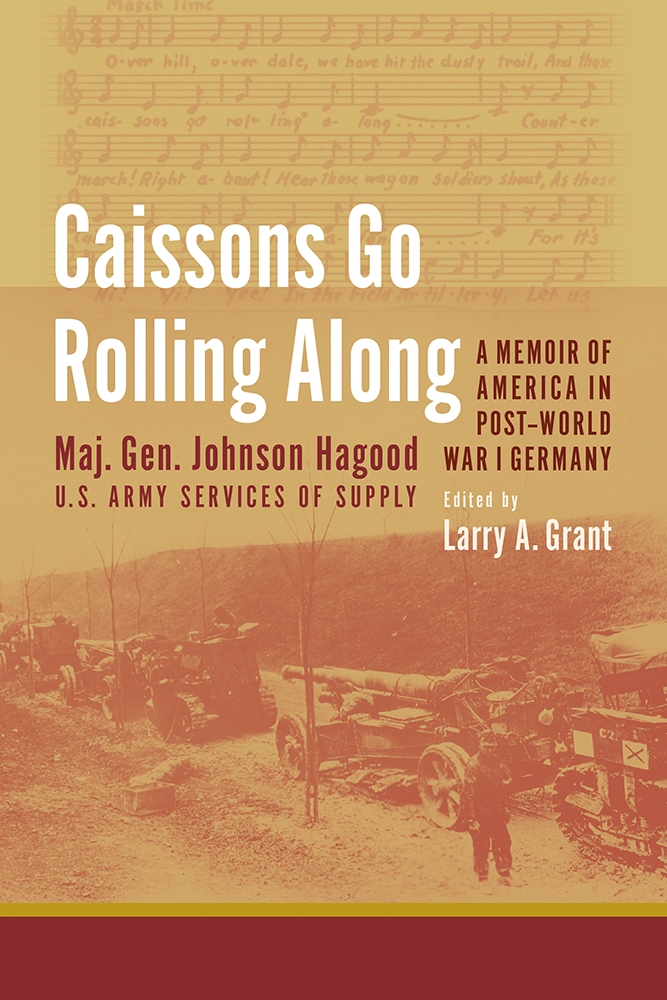 A Memoir of America in Post-World War I Germany

Major General Johnson Hagood (1873-1948) was one of South Carolina's most distinguished army officers of the twentieth century. An artillerist and a scholar of military science, Hagood became a noted expert in logistics and served as the chief of staff of the Services of Supply in World War I Europe. Taken from Hagood's wartime journal, Caissons Go Rolling Along describes his artillery brigade's march into Germany in 1918, the wartime devastation, his impressions of the defeated enemy and occupied territories, and his tour of the recent battlefields in the company of the commanders who fought there.

Written in a conversational style, the narrative focuses principally on Hagood's time in command of the Sixty-sixth Field Artillery Brigade following the armistice. The Sixty-sixth FAB was attached to the American Third Army, which later became the American occupation force in the Rhineland. Hagood recorded his impressions of the conditions in which he found his men at the end of the war and the events of a tour of the French, British, and American battlefields. More important, he set down a record of the devastation of the French countryside, the contrasting lack of suffering he found in Germany, the character of the Germans, and some predictions for the future.

"I have left the text as it was when we held these people at the point of the bayonet," he wrote in his preface years later. "The opinions we formed at that time are important because they were the basis of our action. . . . The scourge of the Great War took a heavy toll . . . and we Americans might as well keep in mind what we were fighting for." Hagood captures defining aspects of the American character at the close of World War I. He described a boisterous, optimistic people, sure of their new place in the world. Rome provided Hagood with an analogy for the new American empire, which he took for granted in his postwar memoir.

Completed during Hagood's lifetime but unpublished until now, Caissons Go Rolling Along is an engrossing portrait of war-torn Europe, a stark reminder of grim realities of the Great War, and a richly detailed look at the daunting task of occupying and rebuilding a defeated nation.

"Written by one of the AEF's most accomplished officers, Caissons Go Rolling Along offers a unique perspective on the immediate aftermath of the First World War. Recorded between November 1918 and May 1919, Hagood's lively and often humorous journal entries take us from the American —occupation zone in the Rhineland to the still-ruinous former battlefields of the Western Front. Larry A. Grant's excellent annotations, together with well-chosen maps and photographs, enhance this important contribution to the primary literature of the Great War."—Steven Trout, author of On the Battlefield of Memory: The First World War and American Remembrance, 1919-1941