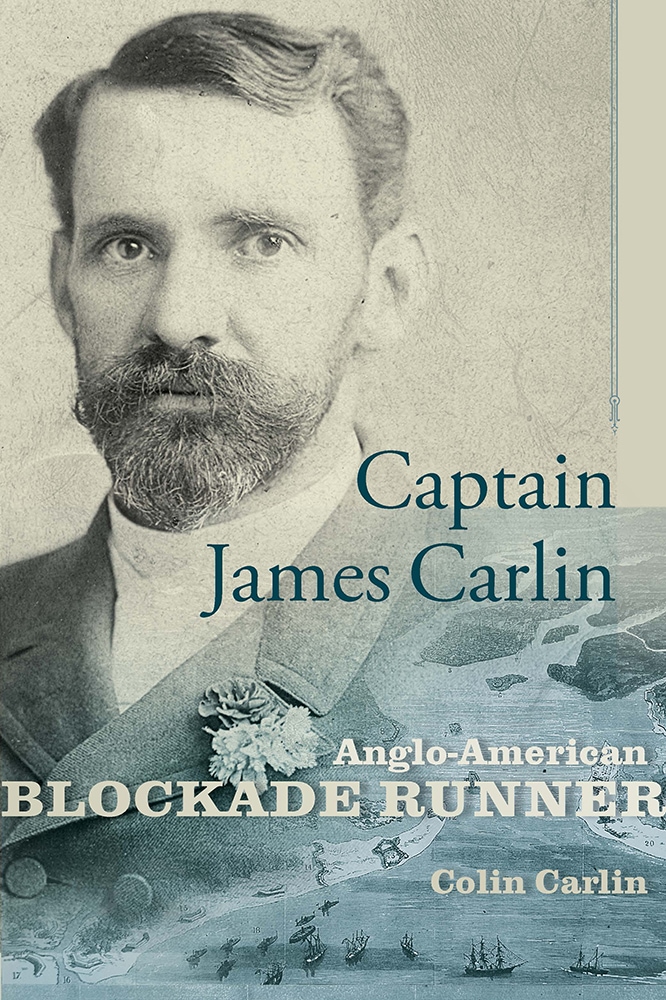 Captain James Carlin is a biography of a shadowy nineteenth-century British Confederate, James Carlin (1833-1921), who was among the most successful captains running the U.S. Navy's blockade of Southern ports during the Civil War. Written by his descendent Colin Carlin, Captain James Carlin ventures behind the scenes of this perilous trade that transported vital supplies to the Confederate forces.

An Englishman trained in the British merchant marine, Carlin was recruited into the U.S. Coastal and Geodetic Survey Department in 1856, spending four years charting the U.S. Atlantic seaboard. Married and settled in Charleston, South Carolina, he resigned from the survey in 1860 to resume his maritime career. His blockade-running started with early runs into Charleston under sail. These came to a lively conclusion under gunfire off the Stono River mouth. More blockade-running followed until his capture on the SS Memphis. Documents in London reveal the politics of securing Carlin's release from Fort Lafayette.

On his return to Charleston, General P. G. T. Beauregard gave him command of the spar torpedo launch Torch for an attack on the USS New Ironsides. After more successful trips though the blockade, he was appointed superintending captain of the South Carolina Importing and Exporting Company and moved to Scotland to commission six new steam runners.

After the war Carlin returned to the southern states to secure his assets before embarking on a gun-running expedition to the northern coast of Cuba for the Cuban Liberation Junta fighting to free the island from Spanish control and plantation slavery.

In researching his forebear, the author gathered a wealth of private and public records from England, Scotland, Ireland, Greenland, the Bahamas, and the United States. The use of fresh sources from British Foreign Office and U.S. Prize Court documents and surviving business papers make this volume distinctive.


Colin Carlin, a retired business executive with a strong connection to Africa and latter on art dealer, is author of William Kirkpatrick of Malaga, Consul, Négociant and Grandfather of the Empress Eugénie. He lives in Bath, England.

"Captain James Carlin's fascinating adventures come to life in this superbly researched biography. As a British captain, commodore, and ship owner, Carlin ran vessels into Confederate ports from North Carolina to Texas. Civil War and naval scholars and enthusiasts alike will welcome Colin Carlin's fresh insights into this shadowy world."—Walter E. Wilson, captain, U. S. Navy (ret.), author of The Bulloch Belle: First Ladies, a Spy, Mother of a President and Other Remarkable Women of a 19th Century Georgia Family

"Colin Carlin has produced a ground breaking work that lifts the veil off the all-important ship captains who supplied the Confederacy with the necessary supplies to sustain its fight for independence. The author does a superb job in relating the story of his relative, James Carlin, a key member of the cadre of captains who sustained the Confederacy by running supplies through the northern blockade on specialized vessels. James Carlin's career not only included operating blockade runners, but also a Charleston based torpedo boat, and after the war he served as a gun runner to Cuban rebels. A sweeping story from England to Charleston, Florida, and Cuba. This book is a must for anyone interested in Southern/Confederate maritime history."—Stephen R. Wise, author of Lifeline of the Confederacy: Blockade Running during the Civil War