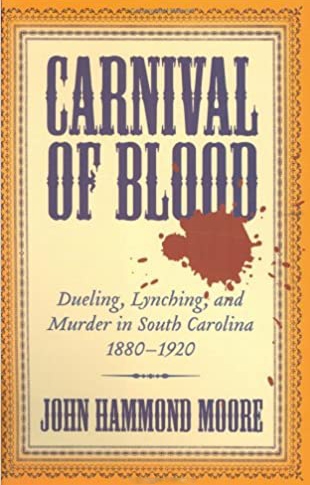 Carnival of Blood presents the often disturbing history of changes in homicidal tendencies in South Carolina over four formative decades on the cusp of our modern era. In his investigation into murder and death in the Palmetto State, John Hammond Moore identifies three specific trends that emerged during the period from 1880 to 1920—the demise of dueling, the rise and fall of lynching, and the proliferation of murder. Moore details specific incidents, ranging from the notorious to the relatively unknown, and questions why more stringent steps were not taken during those decades to curb the mayhem. His findings suggest the answers are far from simple.

Revisiting one of the nation's last formal duels, Moore recounts details of the Cash-Shannon meeting of July 1880 and the ensuing circle of carnage that left nine dead. He explores the circumstances that prompted duels and the reasons for their eventual disappearance.

In his history of lynching, Moore describes the role politicians such as Ben Tillman and Cole Blease played in encouraging the lynching mentality, and he uncovers the underlying forces that pushed white South Carolinians to whip, hang, and otherwise brutalize African Americans. His adroit investigation of published and unpublished sources of information gives readers the best extant view of the number of lynchings in South Carolina, the perceived reasons for their occurrences, and their public or private circumstances. After 1900, lynching in South Carolina dropped dramatically while it continued throughout much of the Jim Crow South. Moore suggests that economic forces, specifically tourism, provoked a public outcry to end the practice.

As dueling and lynching waned, murder and manslaughter escalated. Moore finds that, although South Carolinians may have armed themselves for racially motivated reasons, they were more likely to use their weapons on wives, husbands, lovers, and random strangers of like skin color rather than on people of other races. Examples range from sensational murder cases of the era, such as the killing of Charleston Post and Courier editor Francis Dawson, to boisterous shoot-outs and bizarre crimes involving children, food, and game play. Moore also underscores the differences in acquittal rates for whites and blacks and the impact of inexpensive, easily obtained firearms on the overall crime rate.

A compendium of deadly crimes and the social trends that surrounded them, Carnival of Blood invites further inquiry into South Carolina's violent transition from the nineteenth to the twentieth century.


John Hammond Moore has held teaching positions at Winthrop University in Rock Hill, South Carolina; Georgia State University in Atlanta; and Macquarie University in Sydney, Australia. His numerous publications include Columbia and Richland County: A South Carolina Community, 1740–1990 and A Plantation Mistress on the Eve of the Civil War: The Diary of Keziah Goodwyn Hopkins Brevard, 1860–1861.

"John Hammond Moore's thorough study is a long overdue assessment of the violent transition between the nineteenth and twentieth centuries in South Carolina. Moore stresses that this violence transcended the Redeemer, Populist, and Progressive eras (an element often overlooked in political accounts) and squarely lays blame on the ruling elites who, because of political expediency or lack of courage, allowed the bloodshed to continue through these years. Even the most notorious episodes included here—the Cash-Shannon duel and the Dawson and Gonzales murders—are illuminated with new detail and placed in their proper historical context."—AV Huff, Professor Emeritus of History, Furman University

"In his extensive examination of modes of violence in South Carolina from 1880 to 1920, John Hammond Moore paints an unflinching portrait of tragic times. Taking nothing for granted, Moore considers the publicly stated reasons for violence and, looking deeper, the social trends behinds those reasons. Weaponry, liquor, law enforcement, and the township system of local government all receive provocative analysis here. This comprehensively researched volume is an extraordinary contribution to our historical understanding of violence in the south—and by extension, in the nation—at the dawn of the twentieth century."—Vernon Burton, University Distinguished Teacher/Scholar, University of Illinois at Urbana-Champaign