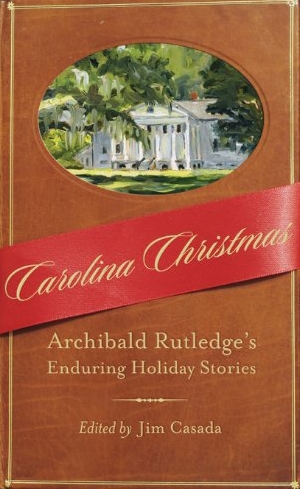 Carolina Christmas collects for the first time holiday stories of Archibald Rutledge (1883-1973), one of the most prolific outdoor and nature writers of the twentieth century and the first poet laureate of South Carolina. Some of Rutledge's finest writing revolves around his vivid memories of hunt, hearth, and holidays. These memories are celebrated in this keepsake collection of enduring stories and poems, further augmented with traditional recipes and food lore associated with the season.

Archibald Rutledge spent decades teaching at Mercersburg Academy in Pennsylvania. All the while he supplemented his income through his writings in order to support a growing family and restoration efforts at Hampton Plantation, his ancestral home in coastal South Carolina—now a state historic site. Each Christmas, Rutledge returned to his cherished Hampton Plantation for hunting, celebrations of the season, and renewal of his decidedly Southern soul. This annual migration home meant the opportunity to enjoy hunting and communion with nature—so vitally important to him—and to renew acquaintances with those living on neighboring plantations and with the African American community he immortalized in his book God's Children.

Rutledge wrote dozens of stories and poems revolving around the Hampton Hunt, fellowship with family and friends, the serenity of the winter woods, and his appetite for seasonal Southern foodways. Edited by Jim Casada, this collection highlights the very best of Rutledge's holiday tales in a vibrant tapestry through which Christmas runs as a bright, sparkling thread. In these tales of Christmas past—each representative of the author's sterling literary reputation and continuing popularity—Rutledge guides us once more into a world of traditions now largely lost. But to tread those forgotten trails once more, to sample and savor the foods he loved, and to experience vicariously the sport he so enjoyed is to experience the wonder of yesteryear.


Jim Casada, a retired history professor, is one of the country's most widely published outdoor writers. He has written or edited more than forty books, contributed to many others, and authored some five thousand magazine articles. Casada has edited four previous Rutledge anthologies—Hunting and Home in the Southern Heartland; Tales of Whitetails; America's Greatest Game Bird; and Bird Dog Days, Wingshooting Ways. He has been honored with more than 150 regional and national awards for his writing, including the Federation of Fly Fishermen's Arnold Gingrich Memorial Award, the National Wild Turkey Federation's Communicator of the Year Award, and the South Carolina Wildlife Federation's Harry R. E. Hampton Memorial Award. A past president of the South Carolina Outdoor Writers Association, the Southeastern Outdoor Press Association, and the Outdoor Writers Association of America, he serves as editor at large for Sporting Classics and Turkey & Turkey Hunting magazines.

"Prolific outdoor writer Jim Casada has long been a champion of Archibald Rutledge's literary legacy. In this superb collection of holiday stories, poems, and recipes, Casada captures the essence of Rutledge's deep connections with his family's Lowcountry plantation and the time honored traditions of hunt and hearth. This is a keepsake reader for any Carolina family."—Ben Mc. Moïse, author of Ramblings of a Lowcountry Game Warden: A Memoir

"Jim Casada has captured the spirit of an era gone by with this fine collection of Christmas stories by Archibald Rutledge. It reflects a nostalgic time when life was simple and spiritual, when families savored close relationships, and when the world was not as complicated. Having participated in some of these hunts, I am pleased to know these memories continue to attract the attention of new generations of readers."—Donald T. Rutledge, grandson of Archibald Rutledge

"Carolina Christmas not only captures the essence of earlier, more adventurous era, it grabs you by the jacket collar and pulls you along for a full-on experience. This timeless collection not only underscores emphatically why Rutledge was one of the greatest outdoor scribes of all time, it reminds us why hunting and the outdoors experience are key to a balanced life."—Daniel E. Schmidt, editor in chief, Deer and Deer Hunting Magazine

"Jim Casada, the dean of American hunting historians, has done it again. After years of prodigious reading, research, and editing, he adds another classic Rutledge anthology to our bookshelves. The enduring subject matter here revolves around the storied Hampton Hunts and other Dixie Christmas traditions. The Hampton Hunts were grandiose, operatic affairs, the likes of which we will never see again. By recounting those adventures, this extraordinary volume informs ongoing efforts to preserve the North American white-tailed deer hunt. For that and its myriad other historical and literary merits, it is the ideal Christmas gift. As Rutledge liked to remind us, 'deer hunting on Christmas Day is as natural as the Christmas Tree."—Robert Wegner, author of Deer and Deer Hunting: The Serious Hunter's Guide and Legendary Deerslayers