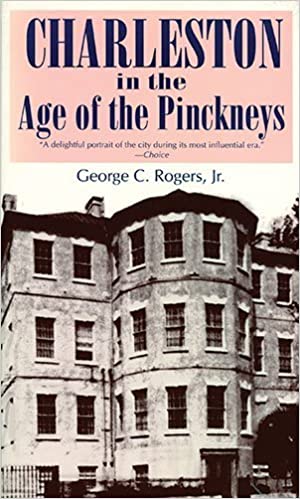 Charleston in Age of the Pinckneys

A look at the rise and decline of the Pinckney family whose members were present at every major point in Charleston's history.

Charleston's greatest years paralleled the rise to influence, the heyday, and the decline of the Pinckney family ... Charleston dominated the intellectual and commercial life of what is now known as the Deep South. It gave Carolina its leaders and decided questions for the rest of the colony and state ... The city was also a great proslavery center, and it was this fact, plus the gradual inward-turning, past-oriented attitude that led to the decline of its influence on contemporary civilization.

George C. Rogers, Jr., the preeminent historian of South Carolina, taught history at the University of South Carolina for twenty-eight years. Editor of the multi-volume Papers of Henry Laurens project, he is also the author of Evolution of a Federalist: William Loughton Smith of Charleston, 1758–1812; The History of Georgetown County, South Carolina; A South Carolina Chronology, 1497–1992; and most recently Generations of Lawyers, A History of the South Carolina Bar.

"In this attractive and incisive volume the ubiquitous and powerful Pinckney family is treated as the prototype of the dominant elite which headed Charleston society in its 'golden age' from the 1720s to the 1820s."—Journal of Southern History

"It is a delightful book to read and comes from the pen of a master teacher of history."—Charleston Evening Post

"Indispensable reading for anyone interested in the Palmetto State's past."—The State

"The author has gone far to explain the economic and political factors which made what was, in its golden century, the most beautiful and the most interesting city in America."—The Southern Literary Journal