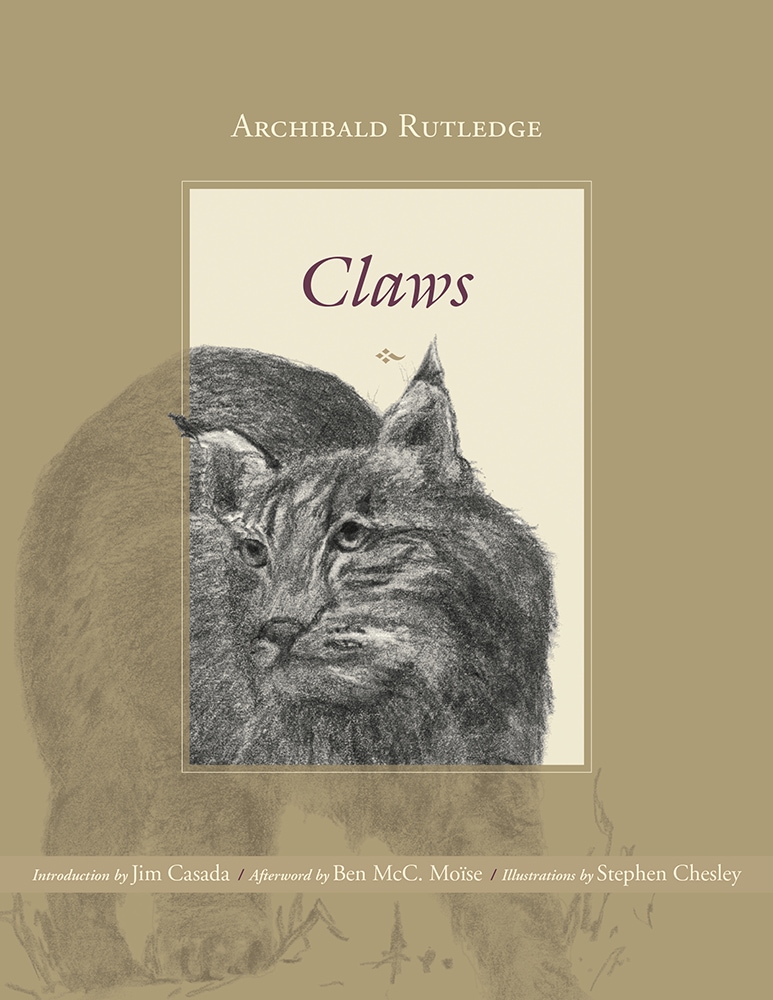 Unseen by readers for a century, Archibald Rutledge's story "Claws" is a fast-paced adventure tale of a young boy, Paul, lost in the foreboding terrain of Spencer's Swamp, the domain of the mighty bobcat Claws, which is deftly evading hounds and hunters alike. When Paul and Claws encounter one another at a perilous creek crossing, Rutledge's mastery of outdoors storytelling shines through in every evocative word.

The short story "Claws" was written for publication in an early twentieth-century boy's magazine and was first collected in the privately printed Eddy Press edition of Old Plantation Days (c. 1913). Limited to just a few hundred copies, the Eddy Press edition is highly prized by Rutledge collectors and includes these four stories—"Claws," "The Doom of Ravenswood," "The Egret's Plumes," and "The Ocean's Menace"—not found in the more widely available 1921 Stokes edition of Old Plantation Days.

Ben McC. Moïse was recognized with the Guy Bradley Award by the North American Fish and Wildlife Foundation and the Order of the Palmetto for his service as a conservation officer with the South Carolina Department of Natural Resources. He is the author of Ramblings of a Lowcountry Game Warden: A Memoir, and editor of A Southern Sportsman: The Hunting Memoirs of Henry Edwards Davis.

Stephen Chesley is a semiabstract artist working primarily in oils, charcoal, and metal. His work has been featured in solo and group exhibitions and has been honored with a fellowship from the National Endowment for the Arts. Chesley's previous collaboration with South Carolina Humanities was an illustrated chapbook edition of the Julia Peterkin short story "Ashes" in 2012.

"The debut publication in the series, 'Claws' is the story of Paul, an African-American boy who gets lost in the woods of Spencer's Swamp, where he ultimately squares off against the local wildcat. . . . It's just the kind of adventure story that filled magazines for young readers at the turn of the twentieth century. Chesley's charcoal etchings not only tell the story, but also add something of his own personality."—Columbia S.C. Free Times

"The rich storytelling style of 'Old Flintlock' will still spark young imaginations today. Reprinted in a new edition by the University of South Carolina Press, 'Claws' isn't so much a hunting story as one of harrowing adventure when a young boy lost in the swamp at night comes face-to-face with the wildcat. Nearly two-dozen charcoal etchings capture the action as it unfolds. Any fan of Rutledge should take interest, as the story has long been out of print and difficult to find."—American Hunter

"When I was a fifteen-year-old boy with burgeoning dreams of being a writer, my Beaufort High School English teacher Gene Norris introduced me to Archibald Rutledge at Hampton Plantation. Mr. Rutledge was the first professional writer I had ever met, and he was magnificent and generous and gracious. That day I learned what it should mean to be a writer and a teacher, and it shaped my life immeasurably. The University of South Carolina Press and the Humanities Council SC are reprinting five short stories from Archibald Rutledge, not seen in print for a century, and enhancing them with exquisite original illustrations from South Carolina artist Stephen Chesley, a masterful introduction from Rutledge scholar Jim Casada, and new afterwords from some of today's finest outdoors writers. These books remind us of Mr. Rutledge's command of the English language, his great skills of observation of the natural world, and his fondness for distilling universal truths from stories of local essence. They also introduce new generations to the storyteller who was South Carolina's first poet laureate and perhaps its most prolific writer. It is good to have Mr. Rutledge with us once more."—Pat Conroy

"The new version put out by the University of South Carolina Press might be an ideal tool to prompt just the type of useful discovery, both natural and vocabulary, that drives the story. And it's fun."—Columbia SC State